originally isolated from the cell nucleus. The nucleic acids are substances, not only in the ring but also in the cytoplasm of cells.

From a chemical standpoint nucleic acids are weak acids.

These are long molecules formed by the repetition of & rsquo; subunit called nucleotide.

L & rsquo; RNA is localized mainly in the cytoplasm, but it also exists in the kernel.

Each nucleotide consists in turn 3 parties :

The phosphate groups and molecules & rsquo; sugars that make up the nucleic acids are identical and play a structural role by against the bases can be 4 types and contain the & rsquo; genetic information.

Nucleotides have varied and important functions, Those are :

These are essential components of nucleic acids. These aromatic molecules whose core is either a purine or a pyrimidine.

a- The purine bases :

Derive from the purine nucleus, which is an aromatic ring 9 5C and 4N atoms and result from the substitution of atoms & rsquo; hydrogen of & rsquo; heterocycle by hydroxyl radicals, amines or methyl.

b- The pyrimidine bases :

Derived from the pyrimidine ring which is an aromatic ring 6 4C atoms and 2N and result from the substitution of & rsquo atoms; hydrogen of & rsquo; heterocycle by hydroxyl substituents amines or methyl.

c- The physicochemical properties of purine and pyrimidine bases :

Tautomerism is the transformation d & rsquo; a functional group by another group :
– simultaneous displacement of & rsquo; a & rsquo atom; hydrogen and
– d & rsquo; an electron doublet from d & rsquo; an adjacent double bond. 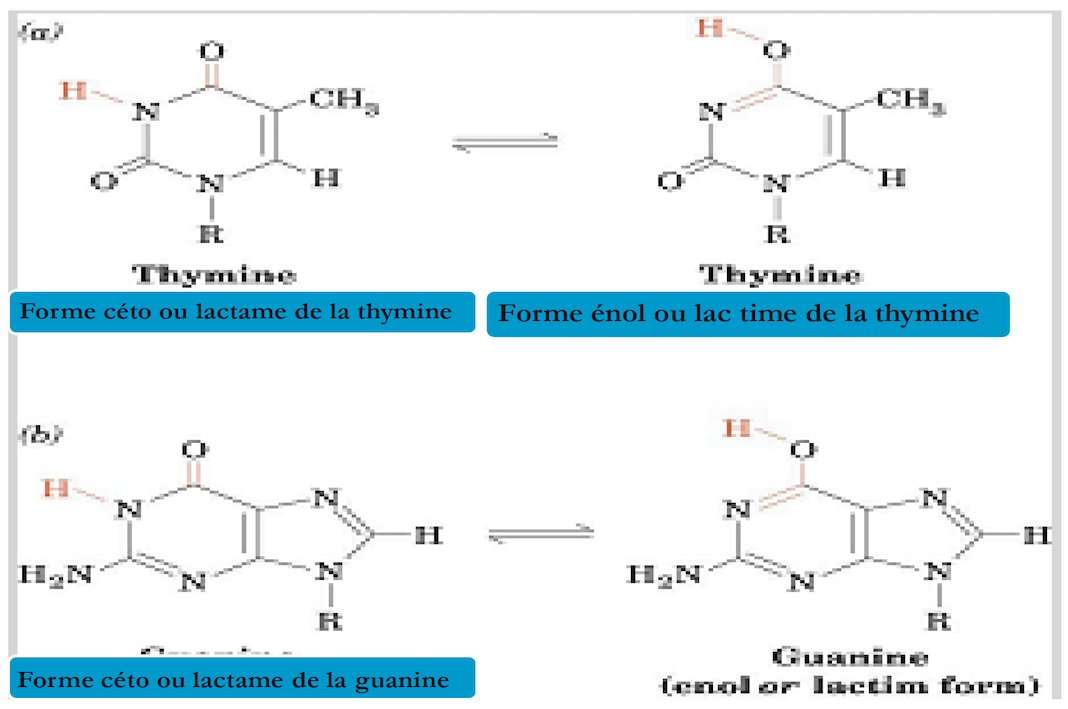 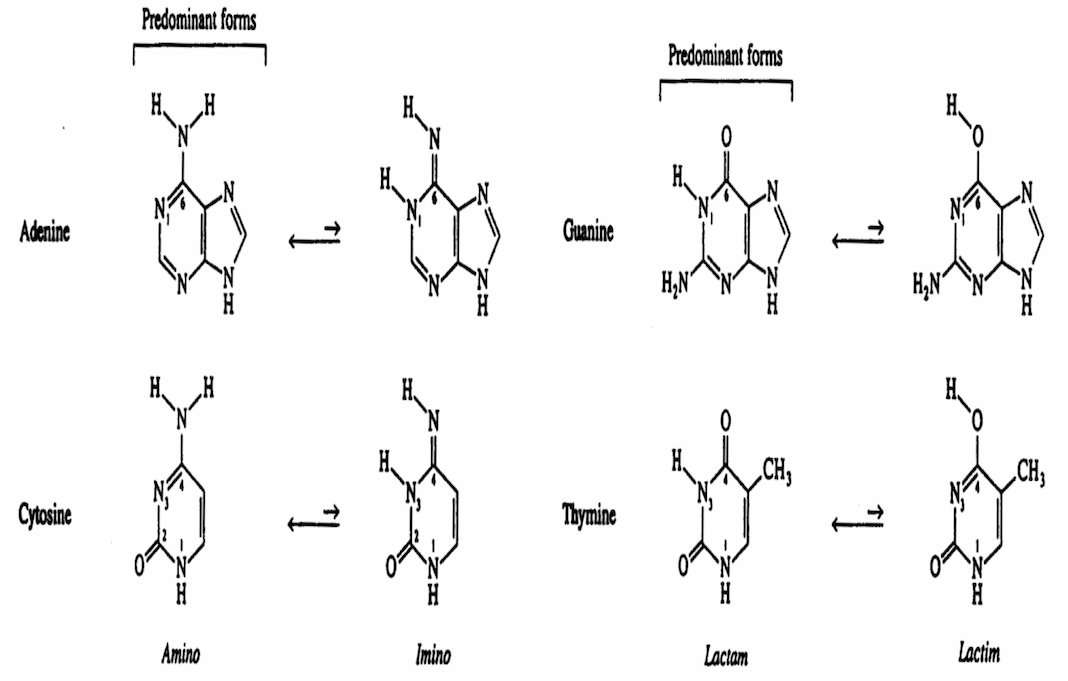 These are pentoses under furan form that & rsquo; nucleotides found in nucleic acids. The beta-D (-) ribose and beta D(-) 2 deoxyribose.

The numbers of the pentose carbon atoms are assigned the prime sign to differentiate atoms bases.

These are phosphate esters of nucleosides, the phosphoryl group can be attached to a free OH of the monosaccharide.

Ribonucleosides can be phosphorylated by 2 ',3'And 5' .de there may exist more cyclic nucleotide. When the molecule of phosphoric acid esterified 2 hydroxyl functional groups of the monosaccharide it give cyclic esters in position 2 ',3'Or 3',5’.

Deoxyribonucleosides may be phosphorylated in the 3 'and 5' since the carbon atom 2 'shall not OH and there can be only one cyclic ester 3',5’. 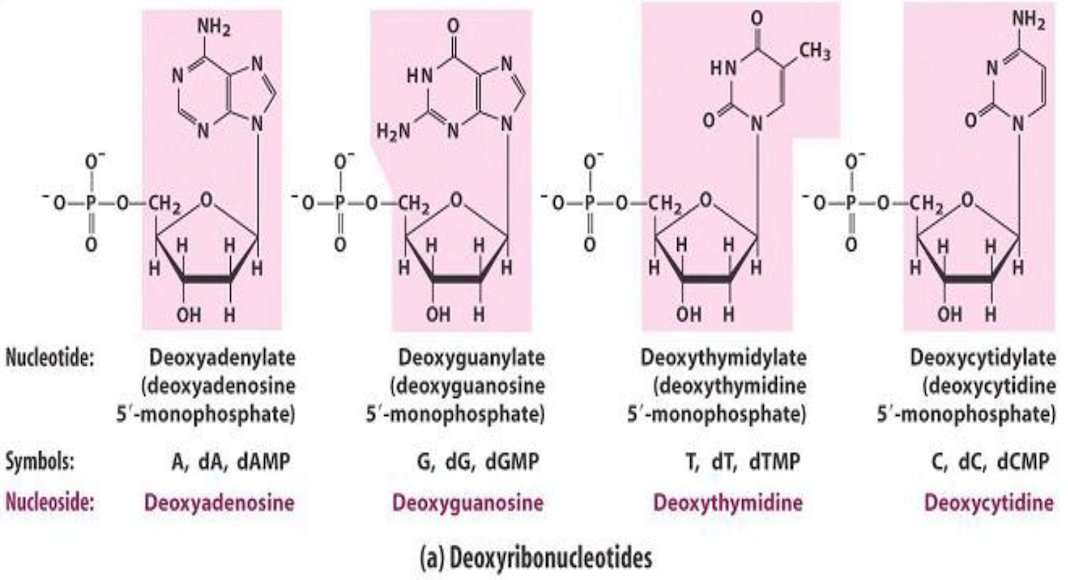 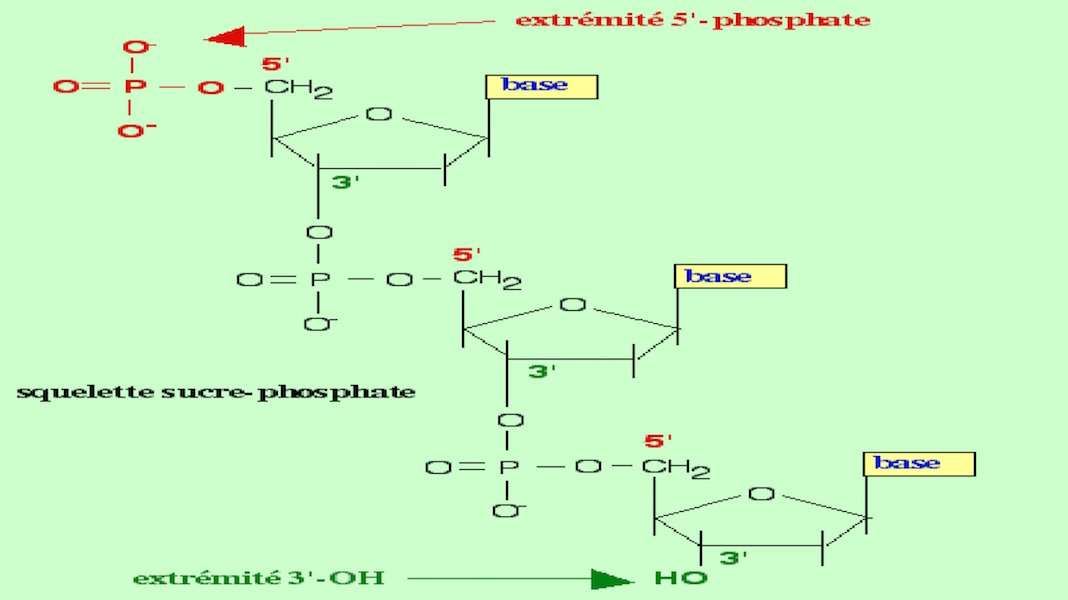 This structure can be schematically 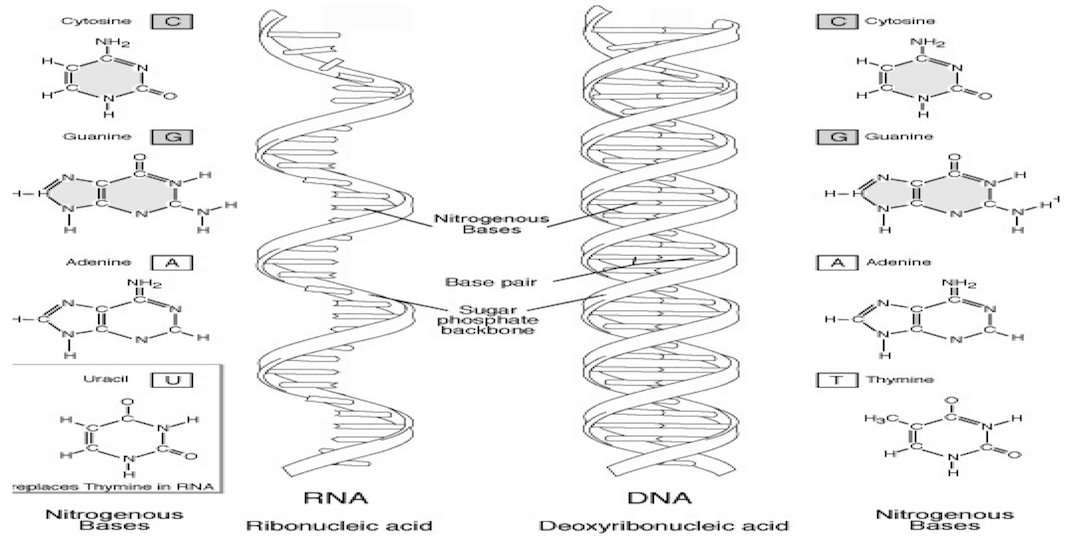 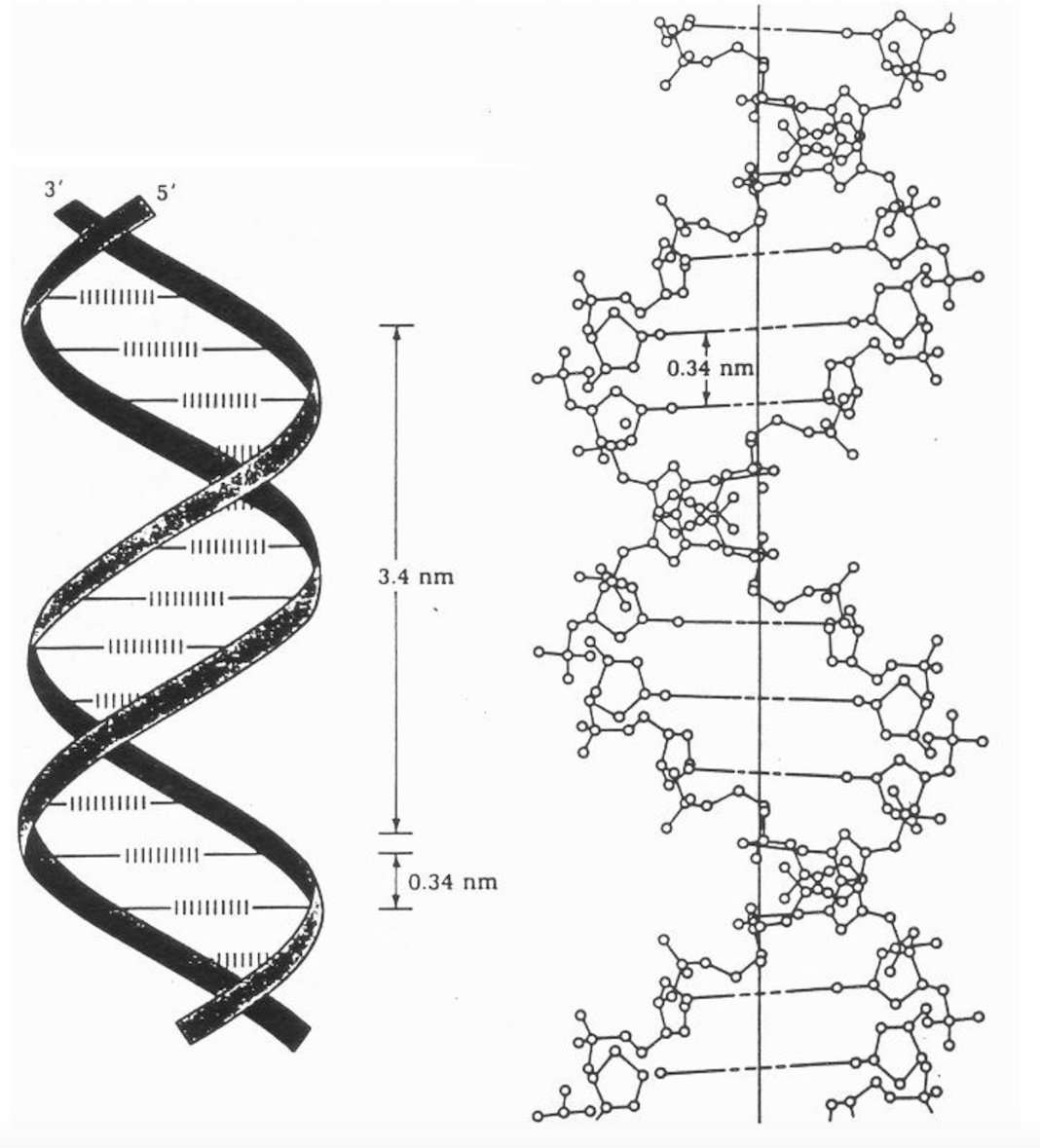 In DNA :
– The ose: deoxyribose
– The basics: A,G,C and T
– Two chains of nucleotides :
A DNA molecule is normally formed 2 or chains 2 stranded polynucleotide.

a- The characteristics of these 2 chains :

The 2 DNA chains present in & rsquo; space a helical .They s & rsquo configuration; wrap around & rsquo; an imaginary central axis, forming a double helix 2 nm diameter .The not the & rsquo; propeller is 3.4nm and contains 10 pairs nucledtides.la distance 2 nucleotides of 0.34 nm.

Means that the two strands are parallel but in opposite directions .For strand is 5'-direction>3 from top to bottom, for the second strand is the direction 5 '-' 3 'from the bottom up.

The complementary rule is :
Opposite A has a T and G cm lace has a C.
This complementarity rule obeys steric reason or room (in front of & rsquo; a purine base cm has a pyrimidine base, and due to link d & rsquo; hydrogen : l & rsquo; adenine is joined to thymine by two hydrogen bonds and cytosine guanine has united by three hydrogen bonds.

If cm heats the DNA there is a rupture of the hydrogen bonds between the bases of the double helix discards 2 strands separate year said that the DNA is denatured. This denaturation is reversible L & rsquo; AD N may also be denatured in a slightly alkaline medium.

L & rsquo; RNA is synthesized during & rsquo; a complex process that & rsquo; cm-called transcription L & rsquo; ribanucléique acid is a polymer of ribonucleotides practices or pyrimidine joined together by bridges 3 ',5’ phosphodiesters, analogpes to those DNA. L & rsquo; native RNA exists as a single-stranded molecule, the single strand of RNA is able to fold on itself in a hairpin. 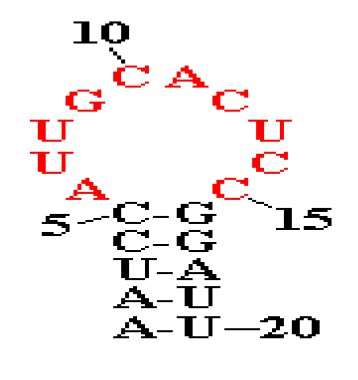 ■ There are several types (TARN:

– Its sequence is complementary to the & rsquo; one of 2 strands of the molecule & rsquo; DNA
– it contains the & rsquo; genetic information for the biosynthesis of & rsquo; a protein.
– has d & rsquo sequences; translation initiation AUG or GUG and sequences announcing the end of the translation :Drop,UAG,FROM.

The RNA nbosomiaux represent over 80% total cellular RNA s & rsquo; associate with proteins to form the ribosome which is the support of protein synthesis. Ribosomes are a combination of 2 subunits : 50S and 30S in prokaryotes and 60S and 40S in eucaiyotes.

sedimentation coefficient d & rsquo; a particle depends not only on its mass but also its shape and rigidity.

By definition, S sedimentation constant, is the sedimentation rate per unit dAccélération (force g). As this constant is low, we use, as a unit, le Svedberg (un Svedberg = 10′13 second).

Allows the transport of amino acids to the ribosome instead of protein biosynthesis :
a single chain 73 at 93 ribonucleotides its 3 'end by a term or CSF binds
THE A and its initial end is always a 5 pG, The anticodon loop comprises bases Following :pyr-pyr-X-Y-Z-pur-base variable. 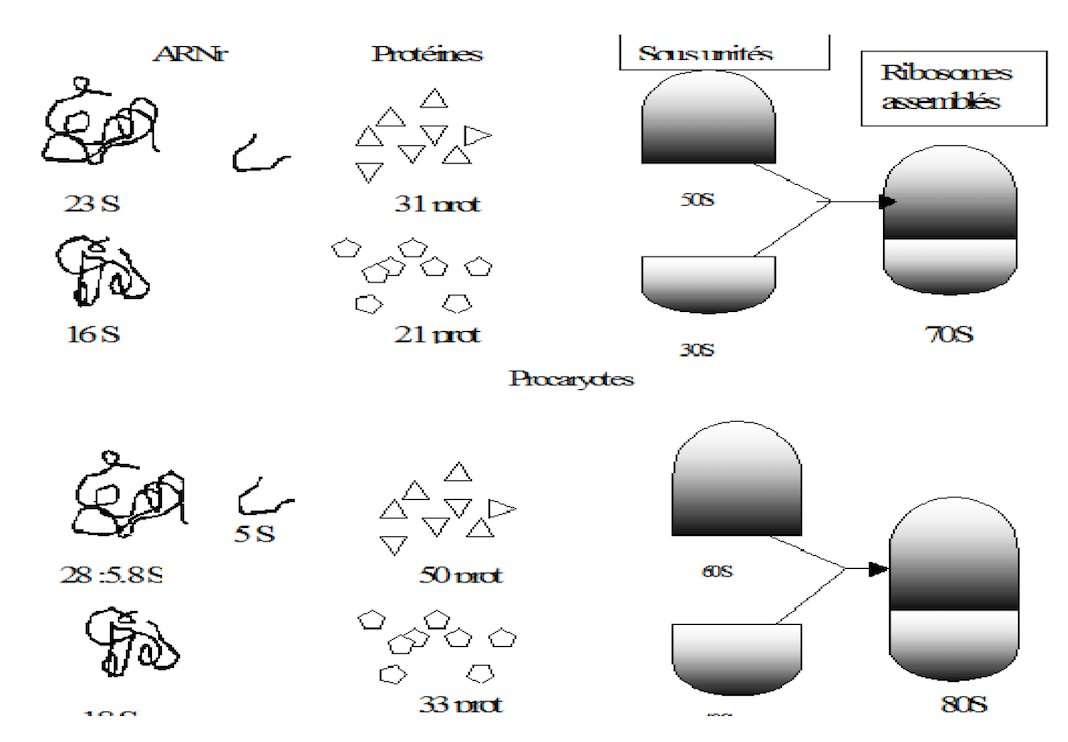