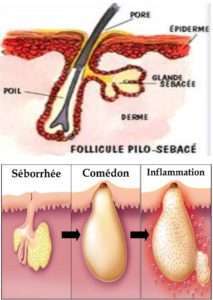 ➢ Source and structure of the androgens :

▪ In the man : Testosterone is secreted by testicular Leydig cells and a small part by the adrenal gland

✓ 50% : by the peripheral conversion of delta 4 androstenedione, This conversion requires the presence of & rsquo; enzyme :  17-β-hydroxy steroid dehydrogenase, it occurs in liver cells and skin cells 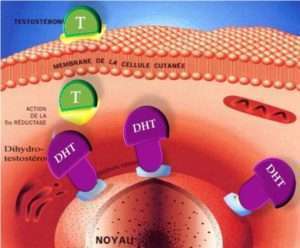 ▪ Di-Hydro Testosterone   (DHT) :   a biologically active metabolite of testosterone. It is estimated that DHT is about 30 times more potent than testosterone due to its greater affinity for the d & rsquo receivers; androgens. Stimulates sebum synthesis at the sebaceous gland

➢ Hyper-seborrhea : c & rsquo; is & rsquo; skin shiny predominant on face (midface region), sometimes the front of the chest and the back-vertebral gutter

▪ blackheads closed (white dots) : are whitish papules 2-3 mm in diameter due to the & rsquo; accumulation of sebum and keratin in & rsquo; infundibulum closed

✓ Pustules : small red elevations with their tops containing a purulent, which can appear immediately or be secondary to papules

✓ Nodules  :  painful and fluctuating inflammatory swelling by palpation that can lead to fistula,   inflammatory cysts or abscesses. They leave scars after healing

✓ scarring : may be planar, depressed or keloid (en relieves),  they can be hypo- or hyper-chromic 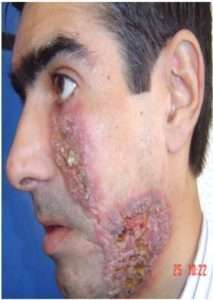 ➢ The number is moderate, but deep nodules in small numbers +++

➢ The mechanism of acne in adult women is still unknown

➢ The role of cosmetics is suspected but not proven

➢ If clinical signs of even minimal hirsutism are associated -> examinations to clarify the aetiology (ovarian ultrasound, hormonal balance in the first cycle portion comprising : determination of free testosterone and bound, delta-4 androstenedione, 17-hydroxy-progesterone in case of anomalies of previous assays) 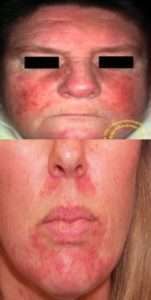 ➢ Flush : sensation of redness and heat on the face.

➢ Phase   infiltration   cutaneous (thickened skin) :   most in the & rsquo; men than in women (rhinophyma)

➢ In  the women : are mostly related to abuse of cosmetics or repeated use of topical corticosteroids.

➢ Due to thickening of the superficial part of the skin,

➢ Due to the & rsquo; clogging of skin pores, she reached the most often arm, but sometimes thighs, buttocks and rarely face

➢ hormone : we notice an improvement in women at mid-cycle and worsening its end.

➢ food : chocolat, sucrerie, that are most incriminated

➢ solar : the sun aggravates lesions of the face

➢ Treatment :  is extirpation with a lancet or a lancet tip

➢ Reduce the number of lesions

✓ Application  :  the average duration of treatment should be <  2  month, l & rsquo; topical antibiotic therapy should not be associated with a general antibiotic treatment (promotes resistance).

❖ Effects irritants : early treatment, This involves the use of low-dose or & rsquo; space applications

❖ phototoxicity : This justifies an application at night, to & rsquo; away from light

✓ Action : they have a keratolytic effect predominant, they are sometimes associated with the & rsquo; topical erythromycin (Stievamycine®)

❖ phototoxicity or photosensitivity : apply at night and use a sunscreen cream during periods of strong sunshine

✓ What are the cyclins :

❖ Effect  teratogenic :  explains contraception 1 month before, during the treatment and 2-3 months after the & rsquo; stop

▪ Hormone : c & rsquo; is the use of & rsquo; cyproterone acetate which has an anti-androgenic effect (DIANE®35)

✓ L & rsquo; hormone therapy may be associated with a local treatment

▪ proscribe the Savo suffer and the makeup (or remove make-up)

▪ Cleaning dermatological from the skin : consists in extracting the closed comedones, open

✓ Peeling chemical : application to the skin of & rsquo; fruit acids that cause an etching of the surface layer of the skin, acts on wrinkles and pigmentations (is done in several sessions with a good photoprotection)

➢ Acne plus grave or scope : systemic antibiotics, associated with a topical retinoid or benzoyl peroxide 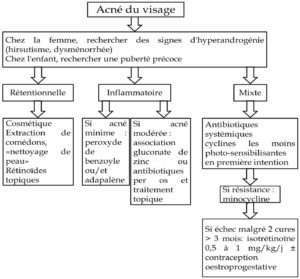