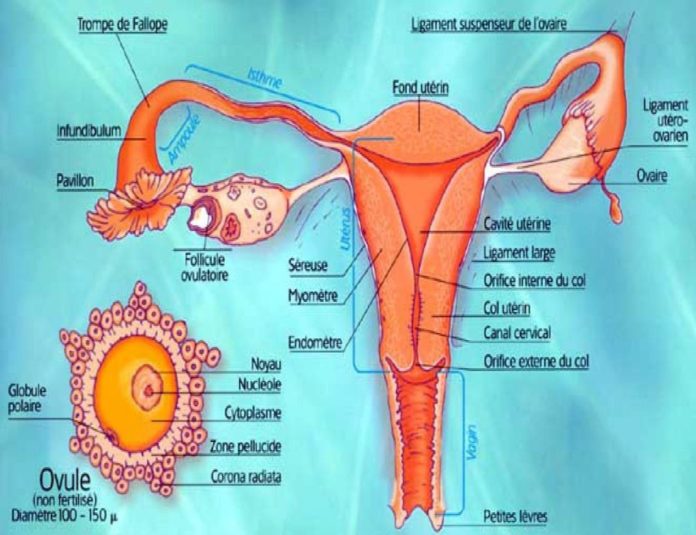 Embryology is a scientific discipline that encompasses the morphological description of the transformations of & rsquo; fertilized egg in body. Embryology is the science development. It studies the major stages of reproduction of organisms. In humans, In sexual reproduction and takes place according to a cycle called the reproduction cycle which comprises 3 steps :

– the embryonic period which is the development of drafts of various organs. In humans, it lasts 2 months from fertilization.

– the fetal period that is the formation of organs from the blanks. It s & rsquo; extends from 3th months to the end of pregnancy.

During development of the embryo, several phenomena observed :

→ the first week, the formation of the embryo begins at fertilization, l & rsquo; s egg segments & rsquo; first in 2, in 4, in 8 a one 16 cells or blastomeres, leading to a morula while migrating to the & rsquo; s uterus or it will & rsquo; implanting.

→ third week, A third sheet, the mesoderm is placed between the & rsquo; ectophylle and & rsquo; entophylle forming the three basic layers that are the & rsquo; origin of the organs and the & rsquo; all systems that will allow the & rsquo; human body to function normally. C & rsquo; is gastrulation. The mesoderm will form part of the & rsquo; longitudinal axis of the embryo, around which s & rsquo; organize the somites, from which will grow cartilage and muscles.

→ the fourth week, part of the & rsquo; ectoderm is the & rsquo; behind the development of the nervous system.

Embryogenesis is the formation of the embryo with the implementation of the first drafts of organs includes 3 phases :

Still called “male reproductive system”, it includes the & rsquo; all bodies involved in the reproductive function. It completes its maturation late and becomes fully functional that & rsquo; at puberty. It has two functions :

The external genitalia include the penis and scrotum.

The penis consists mostly of 2 cavernosa and a spongy body.

When a man is sexually aroused, these organs swell with blood and the penis hardens : This is the erection. the acorn, is the rounded end of the penis. At the end is a hole, urinary meatus. It is also covered by a skin, the foreskin.

The scrotum is the pouch that surrounds and protects the testicles. Also called scholarship, the scrotum keeps the testicles to a temperature below the body, 34.4 ° C in the & rsquo; man. C & rsquo; is a skin bag more or less wrinkled, generally more pigmented than body skin, hairy. The scrotum is divided into two compartments, scholarships each containing a testicle, Instead of producing sperm.

Male genital glands, producing sperm. these glands, oval, two in number, are about 3.8 cm long and 2.5 cm diameter. The testicles have a dual function, exocrine (sperm formation) and endocrine (secretion of male hormones by the Leydig cells, located between the seminiferous tubules). Each gland is enveloped by a fibrous membrane, strong, resistant, d & rsquo; pearly white, l & rsquo; s & rsquo tunica that; thickens superior-posterior pole, forming the body of Highmore.

The testicle contains 200 at 300 lobules, limited by connective tissue septa. Each lobule contains 1 at 4 seminiferous tubules that coalesce into a straight tube which empties into the rete testis. C & rsquo; is a braided intra-testicular network that continues through efferent ducts and by & rsquo; epididymis.

This is the loose connective tissue, rich in blood and lymphatic capillaries. It contains pockets of Leydig cells, constituting the testicular interstitial gland. C & rsquo; is a gland

These are convoluted tubules measuring about lm long and 150 at 180 pm diameter. They are surrounded by a connective tissue sheath, peritubular the sheath and are bordered by the & rsquo; seminal epithelium, resting on a basement membrane.

It is about 70 pm d & rsquo; thickness and has 2 cell types : primary male germ cells (sperm togo sneeze) supporting Sertoli cells. During spermatogenesis, germ cells migrate to the lumen as and when they develop. The adluminal compartment contains spermatocytes and more mature germ cells

their evolution, during spermatogenesis, is in the & rsquo; thickness of & rsquo; epithelium, with migration from the periphery toward the tube lumen. They comprise successively :

Meiosis occurs at the stage of spermatocytes. The first division, reductional, provides the primary spermatocyte crossing secondary spermatocyte. The second, equational, gives spermatids, haploid. Spermatids undergo differentiation, the spermiogenèse, which results in the release of the spermatozoa into the lumen of tube (spermiation).

These are large somatic cells that s & rsquo; extend from the basement membrane to the lumen of the tube. Their lateral faces are depressed to accommodate germ cells

nearby. They have a support role for the germ cells and are essential to the success of spermatogenesis. They differ little before puberty.

Sertoli cells are the only intermediaries between the inner compartment and the rest of the & rsquo; body. They participate in the barrier blood-seminal. Sertoli cells do not multiply.

Long de 45 cm, extends that of & rsquo; epididymis and ensures the transit of sperm up & rsquo; to & rsquo; urethra.

C & rsquo; is a conduit which connects the bladder and the ejaculatory ducts to & rsquo; outside. It allows & rsquo; evacuate & rsquo; urine during urination and semen during the & rsquo; ejaculation. It originates at the base of the bladder, through the cavernosa of the penis and ends with the urethral meatus. C & rsquo; is the only channel where the throw is 2 vas deferens.

These are 2 seminal vesicles, prostate and Cowper's glands

Provide for secretion of & rsquo; a liquid entering the sperm composition, when the sperm pass into the vas deferens. They develop a product secretion : 2/3 the volume of the & rsquo; ejaculate of diverse nature (fructose necessary nutrition and mobility of sperm) Both vesicles resemble small pockets bulbous located just above the prostate.

Composed of smooth muscles and glandular tissue, it surrounds the initial part of the & rsquo; urethra, just below the bladder. D & rsquo; d & rsquo diameter; about 38 mm, prostate secretes a clear liquid that & rsquo; it flows into the & rsquo; urethra during sexual arousal. This alkaline liquid above sperm and reduces the & rsquo; acidity of vaginal secretions.

The outer part is the vulva and comprises :

1- Big lips : two folds generally pigmented skin than the rest of the body and covered with hair from puberty. They cover the & rsquo; opening of urinary ducts and vaginal.

2- Small lips : two folds of skin color rosacea, is located at the & rsquo; inner labia. They swell and turn red with blood flow during sexual stimulation. They contain two openings: one tiny, the urethra to drain urine, the other corresponding to the vagina.

3- Hymen : c & rsquo; is a small membrane which partially closes the & rsquo; introitus, at 1 cm s & rsquo; entry of it. L & rsquo; n & rsquo shutter, is partial to allow the & rsquo; menstrual flow. L & rsquo; n & rsquo hymen; no physiological benefit : the s & rsquo; agit du embryonnaire vestige of the membranes in the booth here & rsquo; origin les parties du vagin d & rsquo; origin embryonnaire différente.ferme en partie l & rsquo; entrance vagin. It is a thin membrane that can make the first more or less painful intercourse and even cause a blood flow when & rsquo; it is perforated.

4- Clitoris : small outer fabric bud, l & rsquo; glans penis equivalent. It is located at the junction of the labia minora to the & rsquo; before and covered with & rsquo; a cap (equivalent of the foreskin), formed in part by the labia minora.

5- Bartholin glands : two in number, located on both d & rsquo; s other & rsquo; vaginal opening, secrete a few drops of & rsquo; a lubricant liquid at the time of sexual arousal. They are the & rsquo; equivalent of Cowper's glands of & rsquo; man.

The internal genitalia of women include : the ovaries, the fallopian tubes, l & rsquo; uterus and vagina.

The gonads of women or ovaries, two in number, are located on either side of the & rsquo; uterus and held in place by various ligaments. They have the size d & rsquo; a large almond and serve to produce eggs, d & rsquo; ensure their maturation and synthesizing the female hormones, estrogen progesterone.

On a section of & rsquo; ovary, on distingue:

The fallopian tubes are two narrow ducts & rsquo; about 10 cm, that start from the bottom of the uterus to move towards each ovary but without direct contact with them. The part of the tubes near the & rsquo; s ovary & rsquo; expands to form a cone fringed, Pavilion. At the time of ovulation, the fringes come enter the & rsquo; egg for & rsquo; help spread the

pavillon. Then the egg was the mistake until & rsquo; uterus. The fallopian tubes are the place where thy can also perform the female sterilization; this operation s & rsquo; called tubal ligation. The tube is made up of four portions: Pavilion, bulb, l & rsquo; isthmus and interstitial portion.

L & rsquo; uterus is a hollow organ & rsquo; about 7,5 cm long and 5 cm wide, in form of an inverted pear, located above the bladder and securely anchored by ligaments. L & rsquo; uterus is divided into three parts : the bottom of which the two tubes depart, the body, heavily muscled upper and capable of & rsquo; increase in volume during gestation and collar, narrowest part that protrudes into the vagina and which secretes a mucus called cervical mucus. L & rsquo; cervical os is a small opening that allows entry of sperm into the & rsquo; uterus, the release of menstrual blood and can s & rsquo; zoom to more than ten centimeters during the & rsquo; childbirth.

C & rsquo; is in the body of the & rsquo; s uterus that & rsquo; s & rsquo implanted, fertilized egg and that will form the placenta subsequently ensures exchanges between the fetus and the mother's body.

The vagina is a thick muscular organ shaped tube 7 at 10 centimeters Length, between the vulva and cervix & rsquo; uterus. It allows the release of menstrual flow during menstruation and the passage of the baby during delivery (its expansion capacity is very large). It is moistened and lubricated by cervical mucus. C & rsquo; is a leading musculoskeletal- membranous whose wall consists of 3 couches: mucous, muscular and weed.