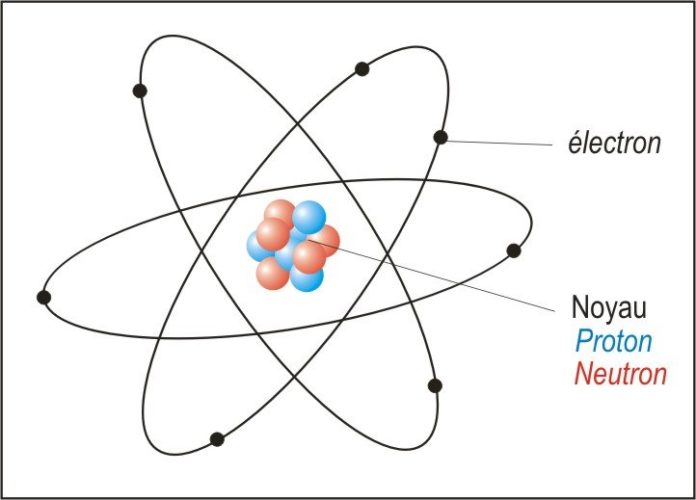 Bohr's model is based on the Planck quantum theory that the exchange of energy between the radiation and the material is carried out only by finite amount or quantum (package) an equal energy hv.

1- The electron of the hydrogen atom that revolves around the core on certain preferred orbits (stationary orbit) which form a discontinuous series, each of these orbits corresponding energy E.

2- During his movement around the nucleus, the electron does not radiate, energy does not change and movement are not amortized. On each orbit privileged, the dynamic equilibrium of the electron obeys the laws of classical mechanics.

3- When the electron moves from one orbit or in an orbit n2, it absorbs or emits an amount of radiant energy? E.

Note: the passage is made by sudden leap.

4- The only possible orbits are such that the product of the amount of movement (mv) by the radius (r) the orbit is an integer multiple of the Planck constant h.

CALCULATION OF THE RADIUS OF BOHR :

For hydrogen in its ground state : n = 1

Each line is characterized by its frequency v or wavenumber v it is possible to measure.

we then define, Ei ionization energy as the energy required to

the atom to extract an electron ( send the electron to infinity ).

Bohr's theory is applicable to hydrogen and hydrogen-like ions.

A hydrogenoid is an ion whose core contain protons and Z has only one electron as hydrogen.

– On dira transition (double-headed arrow); when does not distinguish between emission or absorption.

-The lines of a series tighten increasingly close ime limit line beyond which the spectrum is continuous because the energy is not quantified.

Bohr's theory would have the merit of explaining the spectrum of the hydrogen atom and hydrogen-like ions with the notion of quantifying; while keeping the laws of classical mechanics. But she found herself unable to explain the spectra of heavier atoms.

In reality, electrons do not describe a circular path, existence of electrons is rather talks about probability in a certain area.

Concept of & rsquo; acid and base