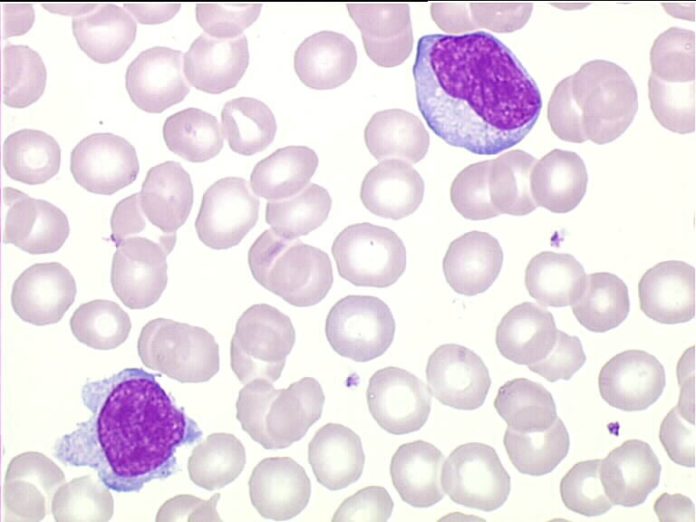 Blood is a mesenchymal tissue including extracellular matrix, plasma, is liquid.

The adult human body contains about 5 liters of blood in the blood vessels.

F IGURES elements of the blood are, is true cells, leukocytes (white blood cells), either elements devoid of nuclei, erythrocytes (or red blood cells ) and platelets, including only cytoplasmic structures. These elements are specific anucleate blood and only come out of that & rsquo vessels; for bleeding. The leukocytes are in transit in the blood and function only develop in the connective tissues.

The blood that circulates throughout the & rsquo; organization ensures the constancy of the internal environment (PH, hydration, Temperature) and transmits to every tissue nutrients and defense needed. It brings the & rsquo; oxygen and nutrients, C02 discharges and waste, it carries hormones from their place of synthesis up & rsquo; their target cells.

All take their origin, in the & rsquo; adult, in the bone marrow hematopoietic red which is contained in the cavities of the & rsquo; cancellous bone.

The hematopoiesis includes maintaining d & rsquo; a stock of stem cells undifferentiated. The production of blood cells is very important, every day are renewed 1% erythrocyte ( 250 billion ),

Many growth factors are involved in all stages of the & rsquo; hematopoiesis.

L & rsquo; red blood cell or erythrocyte, also called erythrocyte is the & rsquo; figurative element of the most abundant blood, it represents the final stage of differentiation of erythroid.

The red blood cell has a disk shape biconcave. Its diameter is 7,2 at 7,9 µm.

The red blood cell is very deformable and can s & rsquo; stretch to pass through the finer capillaries or even by holes 0,2 .mu.m of diameter.

Its plasma membrane has cell-coat or glycocalyx, with a sugar composition of AB system determines the blood group O.

The entire process of & rsquo; erythropoiesis lasts about a week. The lifetime of the & rsquo; red blood cell in the circulating blood is d & rsquo; about 120 days and normal reticulocyte count is 1 at 2%.

Blood platelets are anucleate elements that are essential to stop the bleeding and coagulate, vary in diameter from 2 at 5 /Others.

In the circulating blood, they are lenticular, to irregular contours : c & rsquo; is the unactivated form or DI5COCYTE. When the wafer is turned, it shrinks and emits long processes, c & rsquo; is the form ECHINOCYTE.

Platelet formation or thrombopoiesis is performed by fragmentation of the cytoplasm of large cells, megakaryocytes.

Lymphocytes present in the blood represents only & rsquo; a small portion of the lymphocyte population, most of & rsquo; them are in the lymphoid tissue.

Lymphocytes are generally small size ( 8 at 10 µm), are the small lymphocytes, d & rsquo; other so-called large lymphocytes have a more abundant cytoplasm and sometimes richer in lysosomes. It s & rsquo; is hematopoietic stem cells or NK cells (Natural Killer).

The precursors of the cells found in bone marrow hematopoietic, but most of these cells form when the immune reaction.

The monocyte is actually the undifferentiated form, immature du macrophage, it differs

completely in peripheral connective tissues after a blood transit 24 at 48 hours.

Very little is known intermediate stages between CFU and monocytes.

They are highly mobile cells that play a critical role in the defense of the & rsquo; body.

Because of the different staining properties of their granules, we distinguish neutrophils, eosinophils and basophils.

cell 10 at 12 Diam pm, spherical in circulating blood, its core has 2 at 5 well individualized lobes.

Eosinophilia usually has a lobed nucleus and numerous granules and bulky,

The least abundant of blood granulocytes ( 0,5% on average ), is about 8 of Diam. Granulopoïése

The three granulocyte lineages seem to derive from three different stem cells, the neutrophils being common with the monocyte.

During the & rsquo; evolution, specific granules of the three lines are synthesized at the stage of myelocyte. Maturation ends normally in the marrow.

The regulation granulopoiesis is related to levels of circulating granulocytes and peripheral application.

Bone marrow is contained in the internal cavities of the bone, in the large medullary cavity of the long bones. L & rsquo; adult human body contains between 2 and 4 bone marrow which is only a small part bloodborne.

There are three varieties of morphological and functional bone marrow : red marrow, yellow marrow and cord gray. In fact only the first hematopoietic and c & rsquo; is its rich red blood cells that determines its color