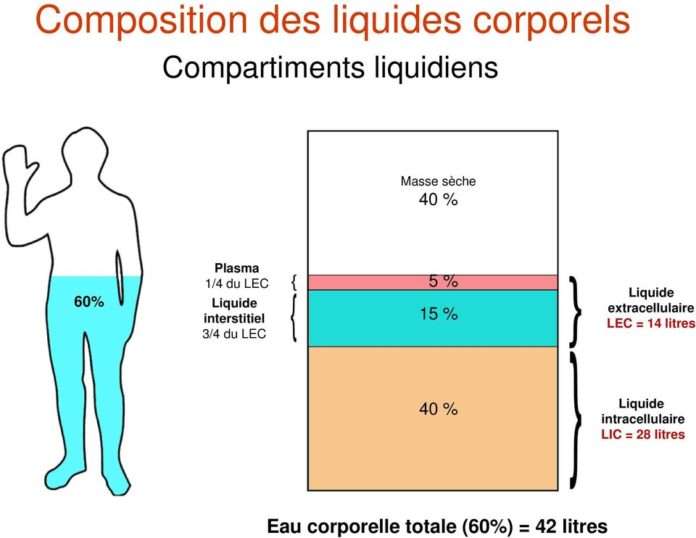 Definition of the internal environment :

In human cells the different devices are surrounded by a space called intercellular space, or is a interstitial fluid liquid, it is the way of trade between the cells which it ensures the supply of energy and structural materials, firstly and secondly the drainage of waste to the excretory territories (reins, lungs).

The internal medium has 2 characteristics :

These two characters depend on two systems :

I- Methods of study of fluid compartments :

• Markers left in the electrolyte masses :
We calculate the mass, or exchangeable ion capital 24 hour :

Water containing the dissolved minerals, is the most abundant constituent of body. He left in compartment or area or volume Fluid.

This stability is hydro-electrolytic balance.

different mechanisms (nervous and hormonal) are responsible for this balance by ensuring equality of inputs and outputs of water and electrolytes : this stability and these mechanisms are homeostasis.

a- It is measured using tracers passing through the wall of the capillaries but not the cell membranes (inuline, mannitol, thiocyanate de Na, brome 82).20% body weight.

Blood plasma was obtained after centrifugation of blood, made of
– water 92%
– protein 70 to 72g / l
– non-protein organic substances (nitrogenous, carbohydrate, lipid)
– mineral components. : The mineral composition is expressed as anionic and cationic charges, is plasma electrolytes.

Blood plasma is electroneutral it contains as anion as cation.

We talk with normal, hypo or hyper to describe the ionic concentrations.

plasma electrolytes: chlorine and bicarbonates represent accompanying anions, it is considered that the amount of sodium determines the volume of plasma and whole liquid extrac Ellul area s.

One dose serum sodium, the kaliémie, the calcémie (all cations.) La bi carbon at émie, serum chloride and protein in g / 1. there remain anion-gap = Na + – (CHL- + HC03-) the difference less than 12 meq/1, when the difference exceeds this value is called anion gap.

In practice a value of the total osmotic pressure is determined by the formula :

Glucose and urea are highly diffusible whose variations are not aborigine osmotic gradients between the compartments PO = 2 x natremia 280mOsm / kg, therefore the only value of serum sodium information about the osmotic state of the plasma and extracellular fluids generally.

includes 2 unequal fractions :
– interstitial liquid itself : real internal environment between the capillaries in the systemic circulation and the cells.
– lymph channeled.

The electrolyte composition is close to that of plasma with small differences due to the Gibbs-Donnan equilibrium.

G Balanced D through a meirbrane permeable to electrolytes and to inperméaUe Pr- :
-has initial situation
-b establishing GD balance :

On the part of the protein products of dSfiusifales ion concentrations of opposite signs is the same on each side of the meirfarane.

This is the fluid volume enclosed in the plasma membranes of cells.

Its measurement is indirect, the difference between the total water and the extracellular volume. It represents 40 % body weight of an adult.

The proportion of water is different depending on the cell type : 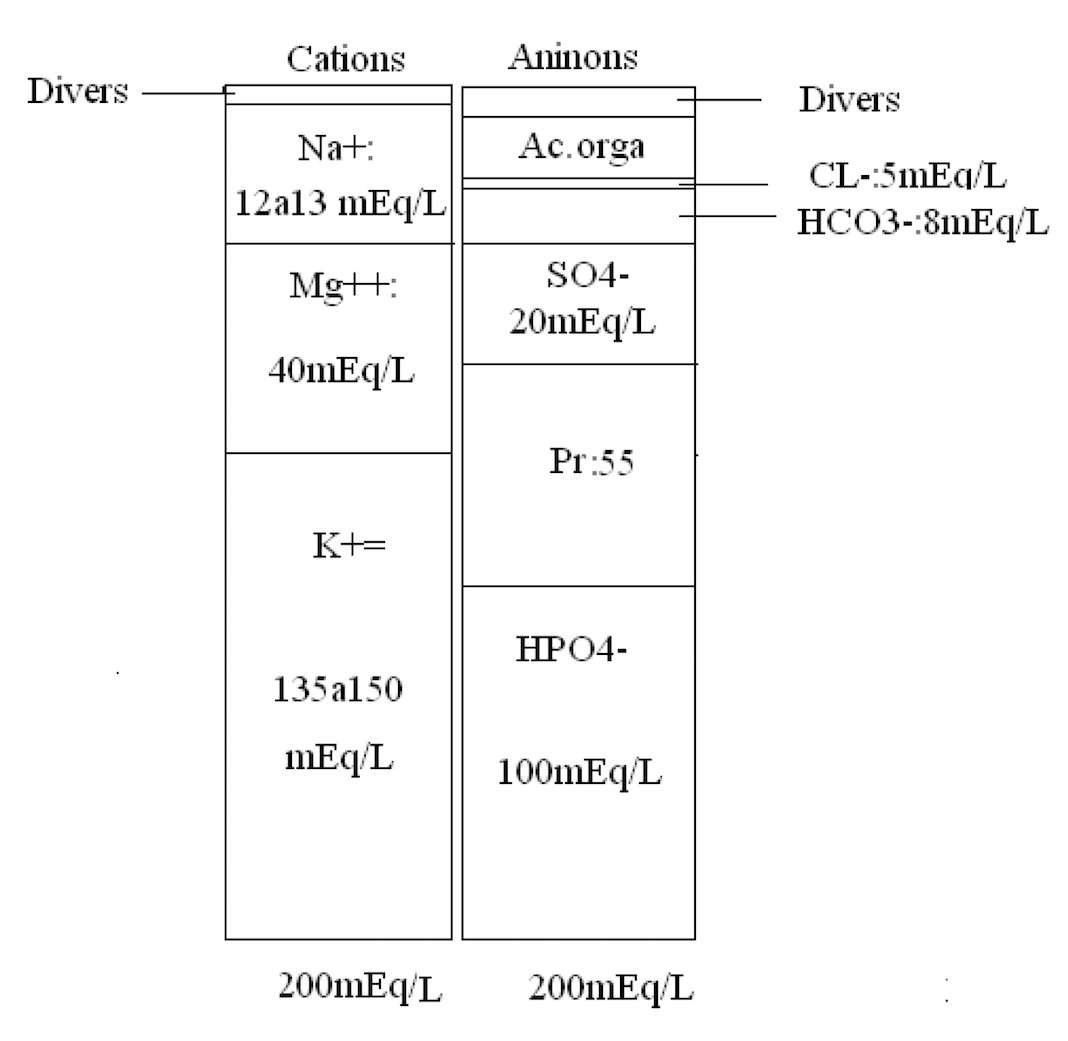 * The electrolytic composition varies from one cell to another it has
– the major anions : phosphates, les proteinates.
– the main cation : potassium, and magnesium

The fluid compartments are not static volumes, there permanently exchange among themselves and with the outside environment, hydro electrolyte balance is dynamic.

1- Exchanges between plasma and the external environment :

by 4 organ trade human samples and rejects water sodium potassium calcium phosphorus, the results of these exchanges is normally zero (different scales are in balance.)

2- Exchanges between plasma and interstitial fluid :

The capillaries are a semi-permeable structure and a large surface 300 at 1000 m2 expanse between plasma and interstitial.

They are permanent, 60 1/mn bidirectional and equal. The water exchange involves breathing gases and small molecules.

– Exchange by filtration re absorption :

These are the major exchanges as they may vary and change both volumes concerned, they are governed by the unequal relationship between the capillaries and hydrostatic pore pressures (Pc, Pi) and oncotic hair and pore pressure (πc ,πi) according to the scheme Starling.

Kf is the ultrafiltration coefficient of the capillary wall.

The ratio changes along systemic capillary due to the gradual reduction of Pc (capillary hydrostatic pressure) due to the blood flow resistance. In arterial pole capillary, the resultant of these forces is a filtration pressure Pf 9 mmHg and venous pole, a pressure reuptake Pr 6 mmHg.

The result is an output of the capillary of about 15 ml / min of water and dissolved substances plasma, followed reuptake 13,5ml of this volume thus filtered the volume is not reabsorbed 1,5 ml/min, it is taken up by the lymphatic vessels in the interstitium.

– The ions diffuse depending on the concentration gradient or electric.
– Simple diffusion occurs across the plasma membrane to the respiratory gas and a few molecules.
– Ion diffusion occurs through selective channels.
– Facilitated diffusion uses membrane protein transporters.

Transfer against concentration gradients or electric, by ionic pumps asiques ATP that maintain different electrolyte compositions inside and outside of the cell, These pumps use the energy released by hydrolysis of ATP example Na / K ATPase. Transfers Water liabilities by osmosis : are governed by the osmotic pressure gradient between the inside and outside of the cell the water moves towards the compartment in which the PO is higher.