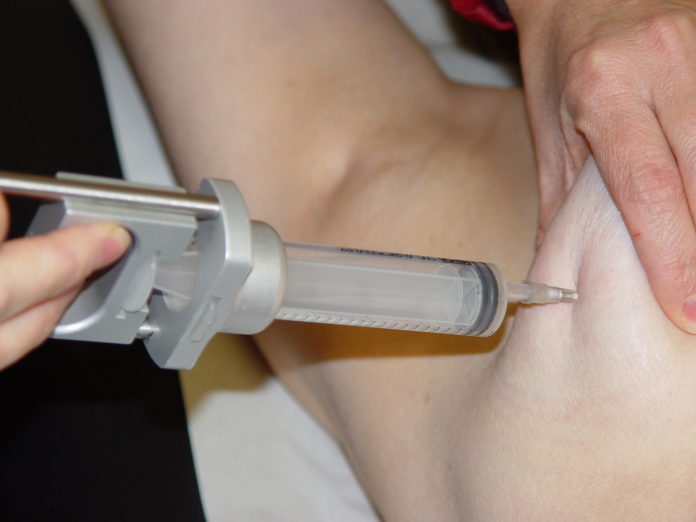 These benefits are undeniable, but the interpretation must be prudent and take into account the size of the ganglion, its consistency, its location, and the clinical context, wherein practiced FNA.

– a device node accessible to the puncture is an enlarged lymph node.

L & rsquo; increased volume of the ganglion may be a reaction to infectious diseases.

In tumor pathology (lymphoma and metastases) ganglion is home d & rsquo; diffuse infiltration or partial, at the expense of normal structures.

– Immobilizing the node between two fingers

– the puncture is made with a thin and short needle, by repeated outward and return to the node, accompanied by & rsquo; s rotation & rsquo; needle to loosen the cell sap.

L & rsquo; without aspiration needle is removed so as not to alter the morphology of the cells.

The content of & rsquo; needle is then projected onto one or two blades and spread.

L & rsquo; operation can be reproduced a 2nd and 3rd time in another node area.

L & rsquo; suction can be recommended in case of necrosis, or when the node is fibrous constitution, to d & rsquo; obtain cellular material, which while impaired can guide diagnosis.

– situations or cytology is suggestive of the diagnosis

C & rsquo; is the most common situation, smear is polymorphic, compound B cell,lymphocytes T,dendritic cells, macrophages.

– Infection with HIV : the presence of & rsquo; lymphadenopathy is a reaction related pathology (opportunistic infection, or a tumor).

Granulomatous lymphadenitis are represented by the node sarcoidosis tuberculosis