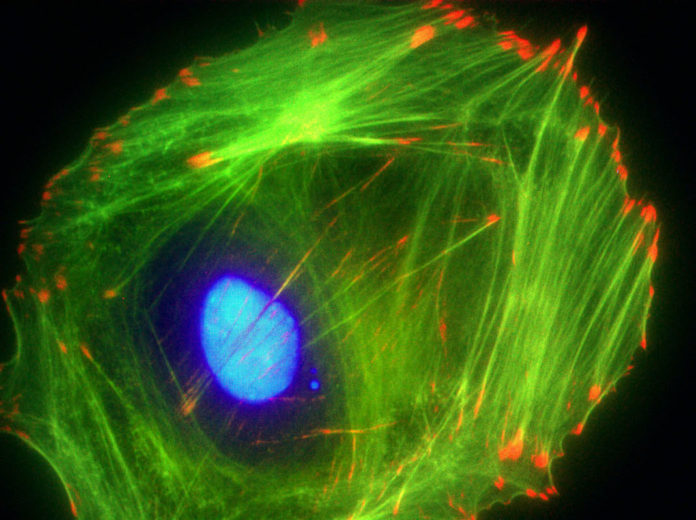 The three main fibers of the cytoskeleton are microfilaments, microtubules and intermediate filaments. These fibers interact to modulate the shape and allow movement of the cell ; they are also involved in the transport of materials within the cytoplasm.

The cytosol of all eukaryotic cells is covered with a network of protein fibers that ensure the shape of the cell and anchor are organelles in defined sites. this network, called cytoskeleton, is a dynamic system, assembling and disassembling constantly. Each of cytoskeletal fibers constructed by polymerization, identical protein subunits attracting each other and spontaneously assembling into long chains. It's the same way that these fibers dissociate, their subunits releasing one after the other from one end of the chain.

The cytoskeleton may comprise three different types of fibers together by their constituent subunits :

Microfilaments are long fibers having a diameter of approximately 7 nanometers ; they are composed of two protein chains intertwined loosely as two strings of pearls (figure1), each bead consisting of a globular protein, actin. It is spontaneously that actin molecules associate with microfilaments.

The rate of polymerization of actin molecules is regulated by other proteins that function as switches, engaging the polymerization process at the appropriate time. Microfilaments are responsible for cell movements such as contraction.

Microtubules are hollow tubes with a diameter of approximately 25 nanometers, trained 13 protein protofilaments arranged in a ring (figure 1). Each protofilament is formed by the polymerization of dimers formed globular proteins of a and |B tubuline. The protofilaments are arranged side by side around a central hollow heart, providing microtubule its tubular shape characteristic. micro- tubules often originate in the cell central region, from where they radiate toward the periphery. They are in constant dynamic state of polymerization and depolymerization. The average half-life varies a microtubule 20 seconds 10 minutes in an animal cell according to whether it is or not division. The ends of nearby microtubules nucleation center are designated " – », those who are distant " + ». In addition to their involvement in facilitating cell movement, microtubules are also responsible for the movement of materials within the cell. Special motor proteins, move in the cell organelles along microtubules. proteins, the kinesins, transport organelles towards the ends " + » (towards the periphery) while the dynéines transport them to the ends " – ».

Microfilaments ; consist of two twisted wires each consisting of a string of a globular protein, actin. Microfilaments are found almost everywhere in the cell, but in particular in the plasma membrane where they are grouped into bundles referred to as stress fibers, that may have a contractile function. Microtubules : microtubules are composed of subunits of tubulin, proteins arranged side by side to form a tube. It is relatively rigid elements of the cytoskeleton, involved in the organization of metabolism, intracellular transport and stabilize the cell structure. intermediate filaments : intermediate filaments are composed of tetrameric interleaved and staggered protein. That provision confers a huge mechanical strength to the cell.

The material movement within the cell :

Various activities of the cell are orchestrated by micro- filaments and microtubules. During the reproduction of cells eg, is the shortening, by depolymerizing microtubules attached to each of chromosomes, ensuring migration of these towards the poles of the cell undergoing division. In animal cells, this migration is followed by a constriction of the cell at its equator by tightening a belt microfilaments. Muscle cells also use microfilaments, to contract their cytoskeleton.

Responsible for the shape and movement of cells, the cytoskeleton further constitutes a sort of scaffold which positions various enzymes and other macromolecules in particular regions of the cytoplasm. Thus, many enzymes are attached to microfilaments ; it is the same ribosome. Moving and positioning specifically enzymes from each other cytoskeleton contributes, as well as the endoplasmic reticulum, the organization of the cell activities.

All eukaryotic cells have to move various materials in their cytoplasm. Most of them use the system of internal membranes as a main transportation route ; Golgi apparatus is packaging materials in vesicles migrate to the ends of the cell. This path is however effective only over short distances. When materials must travel long distances, for example in a nerve cell axon, transport is too slow and it is along microtubules.

Four components are required for this purpose : (1) a vesicle carrying, (2) a motor molecule which ensures the supply of energy required to move, (3) a molecule connecting the bladder to the motor molecule and (4) microtubules in which the vesicle glides like a train on track (figure 3).

Thus, for example kinectin – a protein of ER membranes – fixed vesicles thereof to a motor protein kinesin referred. Like a tiny engine, this protein results in vesicle transport along microtubules towards the periphery of the cell. The energy for kinesin is provided by ATP. This is another set of proteins, the complex of dynactin, providing the transport in the opposite direction, the motor protein being here dynein (see Figure 3) (dynein is also involved in the movement of eukaryotic flagella, described below). The nature of the binding protein contained within the vesicle membrane thus determines the destination of the latter (and content).

Virtually every cell movements are dependent microfilament movement, microtubules or both. Microfilaments play a major role in determining the shape of the cell (ex : Crawling leukocytes). Since they can s & rsquo; assemble and dissociate easily, they allow some cells to change shape quickly. Intermediate filaments for their function as intracellular tendons, preventing excessive stretching of the cell.