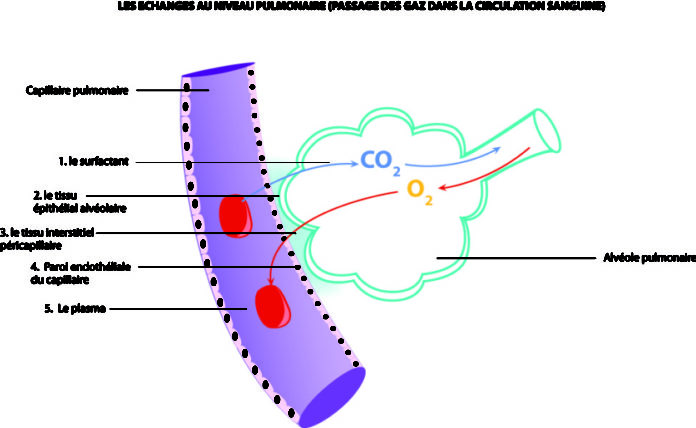 L & rsquo; pulmonary exchanger is the meeting of two circulations : Aerial (alveolar) and pulmonary capillary ; it represents the place of diffusion of oxygen from alveoli to blood, and carbon dioxide in the reverse direction, according to a pressure gradient between the two compartments. This transporting step follows alveolar ventilation in the breathing process

The hematosis is therefore defined by the set of physiological mechanisms that allow the enrichment of mixed venous oxygen.

The existence of pathology disrupting the broadcast will have negative consequences on the entire body such as tissue hypoxia and reduced cell metabolism.

B – by histological Reminder :

The alveolar-capillary membrane "MAC" is more 300 million alveoli and is characterized by a considerable area between 50 and 70 m² for a thickness less than 0.5 micrometer.

It is successively made by the following structures :

After crossing all these layer (by simple diffusion) oxygen must chemically react with hemoglobin to be fixed and transported to tissues, this is why we do not talk mailing but alveolar-capillary transfer.

According to the Fick principle the conveying speed of a gas through a layer of tissue is :

We can then write :

D – Diffusion of oxygen across the alveolar-capillary membrane :

at PA02 averages 100 mmhg, the oxygen partial pressure at the entrance of the pulmonary capillary was 40 torrs : So what follows the oxygen pressure gracient.

The membrane diffusing capacity depends on two factors in series, a physical factor of membrane conductance, a chemical factor or combination of blood with hemoglobin. All these phenomena led physiologists to use the term transfer instead of simple diffusion alveolar-capillary :

i: speed combination with hemoglobin

The time factor for the passage of oxygen through the alveolar-capillary membrane can be considered at two levels :

the transit time of which is that in which the blood through the capillary into contact with the socket (equal to 0.75 seconds, at 0.25 seconds during intense physical exercise)

– the balance of time defined by the time required for the oxygen partial pressures at the alveolus and capillary blood equilibrates (of the order of 0.25 sec)

So whether at rest or exercise, transit time is always enough for a balance can be between oxygen and the alveolar capillary blood.

The PC02 at the entrance of the pulmonary capillary is approximately 45mmHg, that in the alveolar air is 40 torrs : therefore the diffuse C02 capillary toward the alveolus.

Due to its high solubility (25 times greater than that of oxygen) C02 readily diffuses across the alveolar-capillary membrane despite the low concentration gradient between the two compartments.

F – Measuring the transfer capability of the MAC :

If we take the formula TL02 = V02 (PA02-Pc 02), PC02 the term which represents the capillary pressure of oxygen is very difficult to measure. then used carbon monoxide "CO" which not only follows the same path as oxygen, but has also a greater capacity to bind to hemoglobin (affinity 250 times greater than that of oxygen), despite negligible capillary pressures Pc CO = 0.

TL CO is disturbed by a set of diseases which :