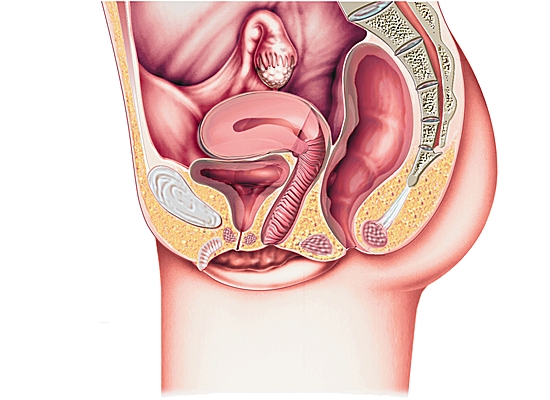 Still called the &quot;male reproductive apparatus&quot;, it brings together all the organs that participate in the reproductive function. It matures late and does not become fully functional until puberty. 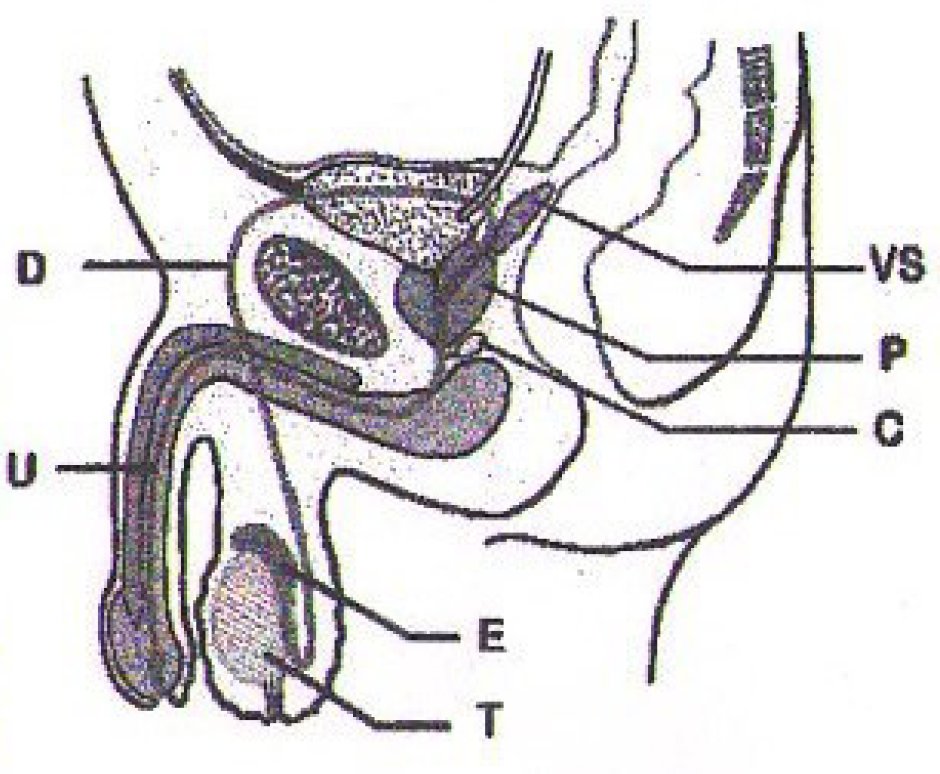 It has two functions:

This last, odd segment is common to the reproductive system and the urinary tract.

Anatomy of the male genital tract

External genitalia include the penis and scrotum.

Still called rod is the organ that ensures the ejection of sperm, called ejaculation, at the time of sexual intercourse; it also allows the evacuation of urine.

The penis consists mainly of 2 cavernous bodies and a spongy body.

When the man is sexually aroused, these organs swell with blood and the penis hardens: It is erection.

The acorn, is the rounded end of the penis. At the end is an orifice, the urinary meat. The acorn is covered by a skin, the foreskin, which is often excised in newborns for health or religious reasons. The removal of the foreskin is known as circumcision.

The scrotum is a more or less wrinkled skin bag, usually more pigmented than the skin of the body (darker), covered with hair. The scrotum is divided into two compartments, the purses each containing a testicle, the place where sperm are produced

During fetal life, the testicles are located in the abdomen. Before birth or immediately after birth, they leave their position to go down in the purses because the body temperature is too high to allow sperm production. The location of the scrotum gives a temperature between 34 and 35 degrees.

The testicles are the male genital glands, producing sperm. These oval-shaped glands, numbering two, are about 3.8 cm long and 2.5 cm in diameter. The testicles have a dual function, exocrine (sperm formation) and endocrine (secretion of male hormones by Leydig cells, located between the seminifer tubes). In humans, the testicles are enclosed in a double outer pocket, called a scrotum (Bursa). Each gland is wrapped by a fibrous membrane, strong, resistant, pearly white and called albugina.

The testicle is surrounded by a conjunctiva capsule, albugina (A).

The capsule thickens at the upper pole, forming the body of Highmore (H).

The testicle contains 200 to 300 lobules (L), triangular on cut, limited by connective partitions. Each lobule contains 1 to 4 seminiparous tubes that converge into a straight tube.

The right tubes represent the first segment of the genital tract and flow into the rete testis. It is an intra-testicular anastomosed network that continues through the efferent ducts and then through the epididym.

The epididym (E) headdress I testicle like a helmet crest. 1-a thickest part, at the top pole, is called the head of the epididym. It contains the efferent ducts. The lower part, or tail of the epididym, continues through the deferent duct (D).

The epididym is a small elongated organ, located on the post-upper edge of the testicle. It consists of the epididymal canal plated on itself whose function is the storage of sperm, from the testicle, and extends through the vased. Sperm remain in these rope-shaped epididymas until ejaculation, when ejected into the deferens canal, which leads the sperm to the urethra. Epididym is the place where sperm ripen, renew naturally and are destroyed if there is no sexual intercourse.

It consists of interstitial tissue and seminiferous tubes, where spermatogenesis takes place.

It is loose connective tissue, rich in blood and lymphatic capillaries. It contains islets of Leydig cells, constituting the interstitial gland of the testicle. It's a diffuse endocrine gland. It represents about 3% of the testicular volume. Leydig's cell develops testicular androgens, mainly testosterone, which in synergy with FSH (of pituitary origin), ensures the maintenance and integrity of the germline. Testosterone affects many other tissues: bone tissue, muscle tissue, skin and its appendages.

The seminiferous (or seminiparous) tubes:

The seminiparous tubes are bypassed. They measure about lm long and 150 to 180 pm in diameter.

They are surrounded by a conjunctiva envelope, the peritubular sheath (or clean membrane) and are bordered by the seminal epithelium, resting on a basal membrane.

It is about 70 pm thick and includes 2 .types of cells: germ cells and Sertoli cells.

Its structure is only apparent in electron microscopy.

Their evolution, during spermatogenesis, is done in the thickness of the epithelium, with a migration from the periphery to the light of the tube.

Spermatides undergo a differentiation, spermiogenesis, which results in the release of sperm into the light of the tube (spermiation).

These are large somatic cells that extend from the basal membrane to the light of the tube. Their lateral faces are depressed to house nearby germ cells. They have a supporting role for germ cells and are essential for the proper development of spermatogenesis. They differ shortly before puberty.

At the outer third of the epithelium, there are tight junctions (J) between Sertoli cells that separate the seminal epithelium into two compartments:

The functions of Sertoli's cell:

About 45 cm long, extends that of the epididym and ensures the transit of the Spermatozoids to the urethra.

When a man uses a vasectomy (equivalent to tubal ligation in women), the surgeon cuts or ligats the vas deferens by making an incision in the scrotum. This procedure prevents sperm from reaching the prostate, ejaculated sperm contains only seminal fluid. Sexual performance is not impaired.

. The urethra originates at the base of the bladder, passes through the cavernous bodies of the penis and ends with the urethral meat (orifice), at the top of the penis gland. The male urethra carries both urine (from the bladder) and glandular secretions from the testicles (including semen from the ejaculating ducterns) through the penis to the urethral meat. It is the unique channel where the two deferential channels flow. This terminal part, common to the urinary and genital system, is carried according to the circumstances. Purine or sperm outside the body.

b- The ancillary glands:

These are the two seminal vesicles, prostate and Cowper glands

Ensure the secretion of a liquid entering the sperm composition, when sperm pass through the deferential canal. Both vesicles resemble small bulbous pockets just above the prostate.

Is composed of smooth muscles and glandular tissue. It surrounds the initial part of the urethra, just below the bladder. With a diameter of about 38 millimetres, the prostate secretes a clear liquid and discharges it into the urethra at the time of sexual arousal. This alkaline fluid precedes sperm and reduces the acidity of vaginal secretions so that it does not cause sperm destruction.

(Cowper Glands) are two pea-sized lobes on either side of the urethra that secrete a lubricant in the urethra to facilitate the transport of sperm during ejaculation. 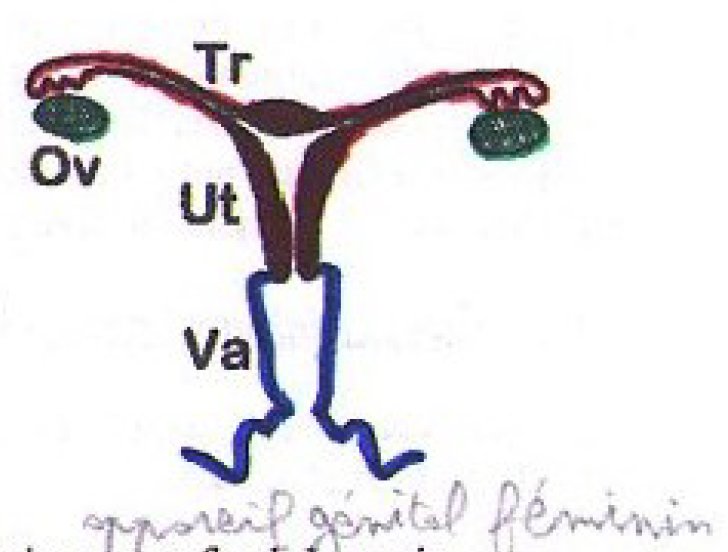 The external genitalia of the woman are more discreet than those of the man and more hidden inside the body.

The outer part: the vulva

a– large lips that are two folds of skin usually more pigmented than the rest of the body and covered with hair from puberty. They cover the opening of the urinary and vaginal ducts. Their appearance and size vary from woman to woman.

b– the small lips are two skin folds of rosacea color, lying inside the large lips. They can almost be absent in some women while in others, they can be very developed to the point of protruding between the large lips. They swell and blush by inflow of blood during sexual stimulation. They contain two openings: one tiny, the urethra to evacuate urine, the other that corresponds to the entrance of the vagina.

c- The hymen partially closes the entrance to the vagina. It is a thin membrane that can make first intercourse more or less painful and even cause blood flow when perforated. It is by the presence of the hymen that the &quot;virginity" of a girl is determined.

d– The clitoris: The large lips also cover the clitoris, a small bud of outer tissue. It is the equivalent of the penis gland (the clitoris and acorn have the same embryonic origin). It is located at the junction of the small lips forward. It is covered with a hood (equivalent to the foreskin), formed in part by the small lips.

e– The two Bartholin glands on either side of the vaginal opening secrete a few drops of a lubricating liquid at the time of sexual arousal. They are the equivalent of the Man's Coxvper glands.

NB: The diamond-shaped region between the anterior edge of the large lip and the anus is called perineum. This real pelvic floor muscle set is of great importance because it supports the internal organs (bladder, uterus etc.).

The women's gonads or ovaries, numbering two, are located on either side of the uterus and held in place by different ligaments. They are the size of a large almond They have the function of producing the eggs, ensuring their maturation and synthesizing the female hormones, estrogen and progesterone.

The tubes are two narrow ducts of about 10 cm, which start from the bottom of the uterus and move towards each ovary without coming into direct contact with them. The part of the tubes near the ovary widens to form a fringed cone, the pavilion. At the time of ovulation, the fringes come to grasp the egg to help it pass through the pavilion. Then the egg goes up the tube to the uterus. The tubes are the place where the woman can also be sterilized; this operation is called tubal ligation.

The trunk consists of four servings:

– the pavilion – the light bulb – the isthme- the interstitial portion 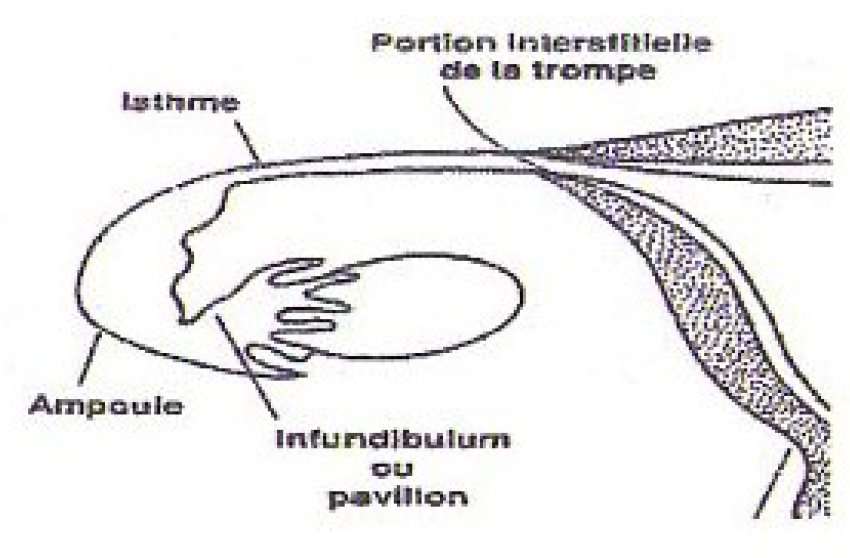 During ovulation, the tubal fringes approach the ovary and capture the egg surrounded by cumulus and part of the follicular fluid. The progression of the egg is ensured by contractions of the musculoskeletal, the beat of the eyelashes and the circulation of the tubal fluid The tube tube tube the tubeline by its contractions also promotes the transport of sperm to the site of fertilization The tubal fluid allows the egg to survive

The uterus is a hollow organ about 7.5 cm long by 5 cm wide, in the shape of an upturned pear, located above the bladder and firmly anchored by ligaments. The uterus is divided into three parts: the bottom from which the two tubes leave, the body, the upper part strongly muscular and capable of increasing significant volume during gestation and the cervix, narrower part that protrudes into the vagina and secretes a mucus called cervical mucus.

The opening of the cervix is a small opening that allows sperm to enter the uterus, the exit of menstrual blood and can expand to more than ten centimeters during childbirth. It is in the body of the uterus that the fertilized egg is implanted and the Placenta will then form, which ensures the exchanges between the fetus and the mother's body.

The uterine wall has 3 tunics:

Endcol secreting cells develop cervical mucus, the quantity and quality of which vary during the menstrual cycle.

Mucus is abundant as ovulation approaches.

Peri-ovulatory mucus (from the 14th day) is well-spinning, has maximum hydration and has a pH between 7 and 8.5 and has antibacterial activity.

Outside the peri-ovulatory period, mucus is ineven, very viscous, and has tight mesh. This mucus appears under the effect of progesterone and persists until the second day of the next cycle.

The vagina is a thick muscle organ shaped like a tube 7 to 10 centimetres long, located between the vulva and the cervix. It allows the release of the menstrual flow during menstruation and the passage of the baby during childbirth (its capacity of dilation is very large). It is moistened and lubricated by the cervical mucus.

It is a musculoskeletal duct whose wall consists of 3 layers: mucous membrane, muscular and weed.