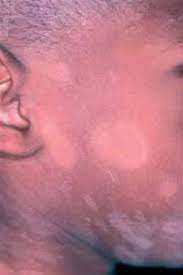 Depends on the phototype of the subject and the sun exposure, so we are talking about:

▪ Constituent Color: which is a reflection of genetically determined melanic pigmentation

In the same subject, skin pigmentation varies according to anatomical regions: areas usually exposed to the sun as well as folds and external genitalia are naturally more pigmented

The colour of the skin is mainly the result of the presence of a pigment called melanin, whose essential role is to protect the basal layers of the epidermis from ultraviolet

Pigmented macules: they are due to a build-up of pigment in the epidermis or

▪ Melanin: natural pigment of the epidermis

Achromic macules: they are due to a decrease (hypochromic macule) or an absence (achromic macule) of melanocytes of the epidermis and/or melanin secretion by them. They come in the form of light spots (e.g. vitiligo and achromic pityriasis versicolor

▪ A brown to brown-black colour is, more often than not, an overload of melanin (hypermelanosis) in the epidermis

▪ A grey or bluish grey colour most often reflects dermal hypermelanosis or overload of exogenous pigments, normally not present in the skin

In the face of hypochromy, it must be specified whether it is total or partial and the existence of another elementary lesion (erythema, papule…)

Lentigines correspond to hypermelanocytosis (increase in the number of melanocytes)

Argyria: silver absorbed per bone or injected for a long time can cause diffuse hyperpigmentation of the coat, an ardoized grey hue with metallic reflections, diffuse topography but above all discovered areas: oral mucous membranes, rhinopharyngeals, oculars or nails may be affected. Argyria has, more often than not, a professional origin (jewellers, photographs, manufacturers of silver nitrate), its therapeutic origin has become rare

Visceral tumours with ectopic secretion of ACTH or MSH 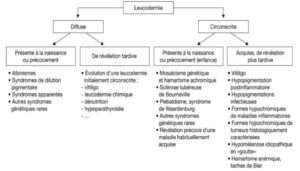 Decrease in number of melanocytes or their complete disappearance

Failure to synthesize or transfer melanin

In seandre forms: the diagnosis is obvious: hair and hair are snowy white, blue eyes, pink is white skin, no tanning, skin is very sensitive to ultraviolet light with a major risk of skin cancer, absence of cut lesions pigmented ane

In less severand forms: hair is straw blond or light brown, blue eyes are light brown, skin is able to tan moderately, there may be pheliondes, lentigines and low pigmented nevus. Diagnosis of comparison with parents and siblings

Diagnosis: exclusively clinical, Wood's light examination is very useful for detecting hypomelanottic lesions in light-skinned subjects, biopsy for anatomopathological examination is only performed for research purposes, it shows an absence melanocytes in the lesion skin

Edefeatedon: Removal of the pathogen is the first therapeutic step to take: removing prolonged sun exposure or using UV sunscreens

Frompigmentting agents: various products have been proposed in therapeutics in order to discolor the hyperpigmented skin, these are oxidizing agents (peroxides…) or reducing

Lasers: they have been proposed for the treatment of pigment lesions and tattoos

Dermocorticoids: may be recommended for the treatment of highly localized vitiligos, however, very strict monitoring should be exercised

Local immunosuppressaints (in France, Tacrolimus in ointment, at 0.03% and 0.1%): are used for the treatment of vitiligo often in combination with phototherapy

Cryotherapy: spared or superficial dermabrasion, may induce repigmentation of lenticular hypochromies of hypomelanosis in idiopathic drops

Surgical treatment: several trials of these methods of treating melanocytenic hypomelanoses, including vitiligo, have been attempted: autologous melanocyte transplant into depigmented skin

Aantioxidants: in the context of the hypothesis that vitiligo results from a deficiency of free radical neutralization systems in the skin

Oral photo-chemotherapy: Combining psoralenes and UVA, currently remains the only treatment that can lead to the hope of rarely repigmentation of the lesion skin of vitiligo