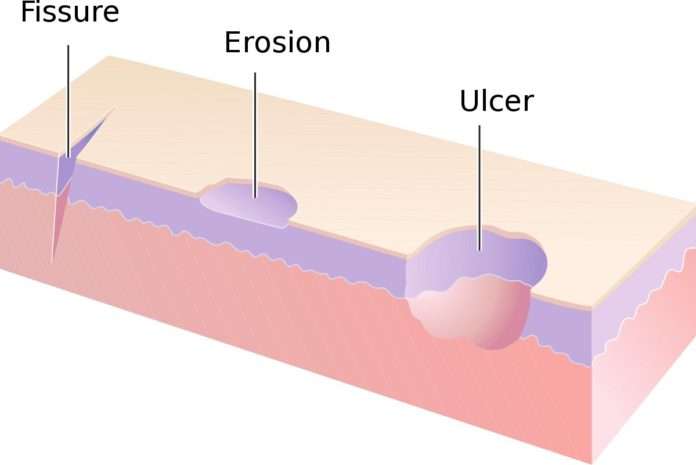 The skin is the body envelope, it is in continuity with the mucous membranes covering the body's natural cavities, it is an organ that has an area of about 2 m2 in an adult, which weighs just over 3 kg, and includes 3 million cells per cm2 About

Epidermis: is the top layer of the skin, which it protects against external aggressions, it measures on average 0.1 mm thick (from 0.02 mm on the face to 1-5 mm thick under the soles of the feet), it renews every 28 days, it includes 4 different cell populations: keratinocytes, melanocytes, Langerhans cells, Merkel cells. The epidermis contains no blood or lymphatic vessels but contains many free nerve endings. The epidermis is a multistrated Malpighian epithelium that is composed of 4 superimposed layers:

▪ Basal layer (basal stratum): it is the deepest layer of the epidermis, it is formed of a single base of cubic or cylindrical cells resting on the basal membrane of the dermo-epidermic junction (keratinocytes), this layer is the germ compartment and the seat of strong mitotic activity

Melanocytes: are regularly distributed along the basal layer in varying amounts, have a starry appearance and their cytoplasmic extensions insinuate themselves between the keratinocytes. They lack an intercellular junction system with neighbouring cells. Melanin is the pigment produced by melanocytes in cytoplasmic organelles

▪ Notrmediate layis (stratum spinosum or spiny layer or Malpighi mucous body): it is the thickest layer, it has 3 to 10 bases of keratinocytes of polyedral forms, which possess in their cytoplasm precursors of keratin. These cells gradually flatten to the surface but their nuclei and organelles remain intact

▪ Greatinlar layer (stratum granulosum): it has 2 to 3 seats of very flattened cells, whose nuclei begin to degenerate. Many keratin grains and keratins appear in keratin filament kits.

▪ Corneal Laplace (stratum corneum): it is the outermost layer, it is made up of hexagonal cells, flattened, well ordered, like scales. Cytoplasmic nuclei and organelles have completely disappeared and the cytoplasm is filled with fibrillary kits formed from keratin filaments and keratohyaline grains. On the surface, these corneocytes are eliminated in a very orderly way: this is the physiological process of peeling

Derme (Latin skin): forms a well-defined barrier that gives the skin resistance to tearing and elasticity to stretching. It is a connective organ made up of connective fibers and cellular elements, it consists of a fundamental substance, elastic fibers, collagen fibers, vessels and nerve nets.

Hypodermis: Continuing the dermis to depth, the hypodermis is a loose, richly vascularized connective tissue that, depending on the nutritional conditions and regions of the skin, contains more or less adipose tissue divided into lobules by spans conjunctivas

Sweat glands: are tiny in size, located in the thickness of the dermis or subcutaneous cell tissue, they are shaped like tubes. These are exocrine glands (which release their secretion via an excretory channel that crosses the dermis, the epidermis and comes to open outside by a sweatpo), very numerous (2 to 3 million), distributed in abundance on the forehead, the p the tip of the hands, the soles of the feet, the territories of the underarms and genitals and are intended to secrete sweat. There are two types:

▪ Apocrclean timeds: these glands develop at puberty, sit only at the hairy (armpit) areas, they are always associated with a pildoseous follicle

▪ Eccrine glands: these glands sit all over the body but mainly at the palms of the hands and the soles of the feet. The eccrine glands play a thermoregulation role (in case of fever or emotional factors), in hydroelectrolytic balance and in the elimination of waste from metabolism

PilosebacefPolling: are made up of the hair follicle to which the sebaceous glands are applied secreting a lipid product and the arvatic muscles with segmental sympathetic innervation whose contraction (under the effect of cold, fear…) triggers hair straightening (goosebumps)

▪ Structure of the hair: the hair is a very strong and elastic flexible stem, about 0.1 mm thick, it is implanted obliquely in the scalp. At its deep part, it adheres to a small bag called a "follicle"

▪ Hair grOwth: hair growth is not continuous but cyclical, so you lose 80 to 100 hairs a day a month. There are three phases:

Anagen phase: lasts on average about 1000 days but can range from 2 to 6 years in humans and is the growth phase of the hair. During the anagen stage, the rate of hair growth is rapid and reaches about half to an inch per month

CaTAGen phase: lasts only 3 weeks, it is the transition or regression phase of the hair, it precedes the resting stage. During the catagen stage, the hair growth cycle slows down and then stops

Taloneenic phaseI know: lasting 5 to 6 weeks, is the resting phase where the hair no longer grows but remains anchored in the follicle. It is only at the end of this phase that the hair falls

▪ Structure: it is the dorsal skin of each finger and toe, forms a very specialized appendix. The nail has multiple functions: protection, fixed counterpress plane in tactile pulp sensitivity, fine grip, aggressive or aesthetic role.

▪ Architecture: microscopically, the nail is described to two parts: a visible part (body of the nail or limb) and a part hidden under a skin fold (root). The moon is the whitish part of the limb, located in the vicinity of the root, it is particularly well developed at the thumbs. The skin that covers the root of the nail is called the "unguéal bulge" and its free (very keratinized) end "eponychium" or cuticle, while the area below the free edge of the nail is the "hyponychium"

Analog approach: fast, which makes the diagnosis upon inspection on a characteristic clinical aspect, it requires having already seen the lesion to recognize it and carries the risk of error

Analytical method: reasoned, is slower, it corresponds to a conventional medical approach: the collection of data (analysis) precedes diagnosis (synthesis). It is this method that will be described here

Interrogation: will tell the story of the disease (beginning mode: abrupt or progressive, localized or diffuse), the appearance of the initial lesion, the progression of the lesion, the evolution of the condition, functional signs (pruritus) and general signs. It should also specify the concept of prior drug intake (toxidermy, induced dermatosis), environmental factors (occupation, habitat, sun exposure) and psychological factors

DermatOlogical examination: based mainly on inspection, palpation and incidental on vitropression, curettage and friction…

Prugly: master symptom, either absent or present, it is important to specify its intensity, the moment of occurrence (day, night, permanent, paroxysmal, effort, rest), the exact topography

AdditiOnal examinestions: in many cases, analysis of skin lesions leads to a diagnosis or a diagnostic group, but sometimes paraclinical explorations are essential

▪ superficial microbiologistscal samples: they can be made by scraping, puncture, swab or smear… looking for an infectious agent responsible for bacterial, fungal dermatosis (direct examination and culture of dermatophytes or yeasts), parasitic (search for sarcoptes by shaving) or viral

▪ Skin With aaside: It is performed when clinical semiological analysis is insufficient to diagnose certainty, it allows the histological analysis of the elementary lesions (s) from which a small fragment (a few millimetres in diameter) is taken after local anesthesia. Two sampling techniques are possible:

Punch: is a piece carry with a circular cylindrical blade that allows to obtain a skin carrot, this technique is often practiced in children because the intervention time is very reduced

Biopsy with you arehate: is more classic, it is done according to an incision in ellipse, carrying out a sample in the orange wedge, a secondary suture is, here, essential

▪ allergologycal Explorations: often necessary to prove the allergic character of a dermatosis and especially to specify the allergen in question in order to avoid it to prevent recurrences

Photo-biological tests: are indicated during dermatoses by photosensitization

Mtogether: stain, lesion from a few millimetres to a few centimetres in diameter, visible but non-palpable. Matches a simple color change:

▪ For erythema, is a localized or diffuse redness of the skin, fading away at vitropression, we can distinguish:

▪ verrucosiscompanies: vegetation whose surface is covered with a keratosic coat (e.g. wart)

Squames: layer strips that stand out on the surface of the skin, are not very adhering and easily detach, they are spontaneously visible or appear after scraping with a foam-edged curette. Traditionally, one distinguishes:

▪ Scaless in collar: small fine dander, adherent to the centre but not to the periphery, covering an inflammatory lesion (e.g. g. gibert's pink pityriasis)

floury, they are typical of pityriasis capitis (scalp films)

Sclerosis: induration of the skin, which becomes difficult to wrinkle with the erasure of relief (e.g. scleroderma)

Vitropression: is to apply a transparent object (glass or plastic) against the skin lesion, thus emptying it of its blood (e.g. erythema fades with vitropressure)

Wood's at theght exam: is to examine the skin in ultraviolet light in the dark (infectious dermatoses…)

Application Of Chinase ink: allows you to search for scaly furrows

Firm lineWith stimulation: using a soft tip, allows you to search for a dermographic

Scraping with a foam cwrongse (from Brocq): allows you to show the characteristic flaking of psoriasis

Dermatoscopy: for the examination of emersion and epi-illumination lesions, allows, after the application of a drop of oil, to carry out an inspection through the corneal layer that becomes transparent

Histopathological terminology is essential for an effective anatomoclinical confrontation

Acanthose: is defined by an increase in the overall thickness of the epidermis, acanthose can be diffused or selectively affect the epidermal crests, in this case, the acanthose is called "psoriasiform". In the case of a selective increase in the thickness of the granular layer, it is called "hypergranulosis", the plane lichen is the characteristic example

Hyperkeratosis: is a thickening of the corneal layer, it can only be relative when there is a decrease in the thickness of the underlying stratum spinosum and granulosum. If keratinocytes keep their usual appearance devoid of nuclei, it is an "orthokeratosic" hyperkeratosis. &quot;Paraatosis" is defined as a persistence of nuclei within corneocytes, it is observed mainly in diseases where epidermal renewal is accelerated

Acantholyse: is characterized by a loss of the intercellular connection of keratinocytes, the cells appear isolated from each other and this leads to the formation of intra-epidermal bubbles, as in pemphigus. This acantholyse can be seen on all levels of the epidermis

Spongiosis: results in a spread of keratinocytes from each other due to intercellular edema, intercellular spaces are clear and widened, resulting in "mesh" images

Papillomatosis: results in an exaggeration of the design of the papillae and inter-papillary crests, so it is frequently accompanied by an acanthose

Dermal atrophy: is characterized by a decrease in overall thickness, scarcity of collagen and hypotrophy of the appendices

Sclerosis: on the contrary, is defined by a thickening of collagen, which becomes very horizontal

Fibrosis: refers to an increase in collagen fibers and dermal fibroblasts

Cytostéatonecrosis (fat necrosis): results in the presence of burst fat cells that result in puddles of slightly basophilic molten fats