Atypical bornvus andndrome: a particular shape, defined by the presence in large numbers of nevus (50), often of large size (6 mm in diameter), having atypical aspects (irregular edges, polychromy). These subjects will be closely monitored because of the high risk of developing melanoma

Family factor: about 10% of melanomas occur in a &quot;family melanoma" context, defined as at least 2 melanomas over 3 generations, prompting the identification of the familial predisposition gene to melanoma

So the risk markers for melanoma:

A different lesion from the other nevus of the subject (sign of the &quot;naughty duckling&quot;) is suspect

Any suspected melanoma lesions must be excised for a histopathological examination

Intra-epidermal component: made of melanocytes that form a tablecloth or libraries arranged irregularly along the basal, associated with an invasion of the surface layers of the epidermis by isolated migrating tumour cells and anarchic

The anatomopathological report should specify, for each lesion, a number of parameters that allow: 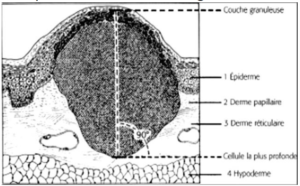 Breslow Index: it represents the measurement in millimetres, under an optical microscope, of the maximum thickness between the grainy layer of the epidermis at the top and the deepest malignant melanic cell. Melanomas that do not invade the dermis are not measured and are called &quot;in situ&quot;, and there is a quasi-linear correlation between tumor thickness and average survival time

DIrmatovsCOPIC examinedion (epiluminescence): is a non-invasive complementary examination method that uses a semiology of its own, based on the analysis of the image observed as a whole and facilitates differential diagnosis but operator-dependent and be subject to the pitfalls

There are 4 major types of melanoma, depending on their clinical and histopathological appearance and their mode of progression

Seborrheic Keratosis: usually multiple lesions, sitting on the seborrheic areas of the face and trunk, the clinical aspect is that of yellowish, brown or frankly black lesions, with a wart surface and riddled with corks keratosic damage to the skin. Differential diagnosis with melanoma is usually easy, dermatoscopy makes it easy to correct the diagnosis in difficult cases

Tattooed basal cell carCinoma: it can be confusing with an SSM or with nodular melanoma, the beaded appearance of the lesion or the presence of telangiectasies can guide diagnosis, dermatoscopy may also be useful

Histiocytofibroma pigmented: nodular lesions, strictly intradermal, which can be pigmented, the palpation of these lesions which is quite characteristic (undue lozenge) usually helps to correct the diagnosis

Hemangioma: it can take a bluish or black coloration when irritated or thrombosised, dermatoscopy is also characteristic

Botryomycoma: it can pose a diagnostic problem with achromic nodular melanoma, its post-trauma occurrence may help the diagnosis

SMangueal Hematoma: It is generally easy to differentiate from sub-ungueal melanoma. If there is any doubt, the exeresis must be made in order to have histological confirmation of the exact nature of the lesion

Surgical: Surgical exeresis must be early, in the non-invasive stage, as it allows healing

Chemotherapy: various drugs and protocols are used but melanoma remains insensitive to chemotherapy

Radiation therapy: is useful in case of lymph node or metastatic disease