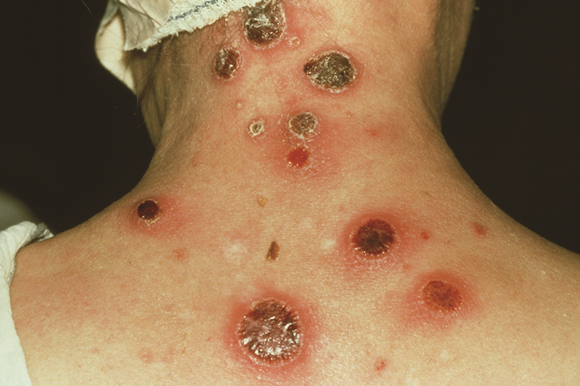 There are several classifications that overlap in part:

Syphilitic canker (inoculation point): canker is typically an exulceration (or erosion) or more rarely a well-defined mucous ulceration, 5-15 mm in diameter on average, unique, more rarely multiple, clean bottom, rosé, based on undulating with protected palpation (this is the only truly evocative semiological character, it results in the impossibility of folding, between two fingers, the surface of the ulceration that is only a block with the underlying induration), painless. Dwarf, giant, painful and inflammatory cankers (overinfection), mixed…

In humyears: is quite electively in the balano-preputial furrow, more rarely on the acorn or on the sheath

In wOmen: is most often on the outer part of the vulva (small lips, large lips, fork), more rarely vaginal and as it is painless, it then gladly goes unnoticed

Satellite adenopathy: appears 4-7 days after the canker, the canker is accompanied by a non-inflammatory satellite adenopathy, usually unilateral, they are multiple, small and hard ganglia, sometimes centered by a larger node ( the "prefect" of the groin in the inguinal hollow), mobile, painless, without peri-adenite, which does not fistulize to the skin. In some locations (cervix, rectum) adenopathy is not clinically visible

Palmoplantal syphilids: are not papulous but infiltrated, they straddle the palm or plantar folds, which makes it possible to distinguish them from the physiological hyper-pigmented spots in black women

On the face: the papules can regroup, drawing circumations, S, especially on the cheeks and chin (elegant syphilids of Brocq), the reaching of the nasogenian furrows evokes seborrheic dermatitis and that of the chin acne acne

Clinical polymorphism is important and the lesion can be in the form of dander, scabs, ulcerations or necrosis, but the papule and never blisters are found underneath.

Mucous manifestations: the damage to the mucous membranes makes the mucous plaques, they are maculo-papulous lesions, rounded, with clear limits, painless, which can become erosive or vegetative depending on the location, they are contemporary roseolas and papulant syphilids, they are highly contagious and can last for several months, they touch the tongue ("forked plates" because the taste buds are abraded as broke), the pharynx and the larynx (the raucousness of the voice), the commissure labiale (false pearl with para-commissural papule split in two and not simple crack without relief of the bottom of the crease), external genitalia

Dandrian protests: the attainment of dphaners is classic but rare

General signs: they reflect the spread of infection, they are mostly discrete but can be severe: fever (most 38-38.5 degrees Celsius up to 39-39.5 degrees Celsius), headaches (which are not synonymous with neuro-brain damage), meningeal syndrome, poly-adenopathies, hepato-spleenomegaly (with cytolytic or cholestatic biological hepatitis), poly-arthralgias, nagging "bone" pain, variable alteration of the general state, ophthalmic manifestations (papillitis, learn, optic neuritis, justifying a systematic ophthalmological examination during secondary syphilis, their presence would modify treatment in the same way as a neurological impairment and would require treatment with Penicillin G in IV)

Softeniof stage: within a few weeks, the nodule softens and becomes fluctuating, it adheres to the skin which becomes inflammatory

The ulceration stagive: the skin opens in the form of a fistula rhythm that will enlarge to achieve a perfectly rounded ulceration (as traced to the compass), a few centimeters in diameter and regular edges, the bottom of this ulceration becomes quickly clean after evacuation of cellular debris

Hwalig sdays: within a few months, the skin closes, creating a rounded scar, at the whitish atrophic center, depressed at the periphery, pigmented

– Damage to the oral minthing: in particular the palate vault and the uvutter, which will make a voice and can lead, in combination with the lesions of nasal osteochondrite, to a collapse of the nasal structures with nose in "pot foot"

CNS ginms: are rare and manifest in tumor syndrome

Early congenital sYphilis: reveals itself from birth to 2 years, it is the congenital equivalent of secondary syphilis, it similarly associates skin signs, bone, meningeal and various visceral

Late Congenital Syphilis: Reveals after the age of 2 years, it is the congenital equivalent of tertiary syphilis

Stigmates: are the after-effects of lesions observed during congenital syphilis, the most characteristic are rhagades and dental abnormalities

Treponeme is not cultivated in showcaseO, the diagnosis of syphilis can only be made by highlighting treponeme itself under a black-bottomed microscope or indirectly by highlighting the specific antibody response

It highlights, in the patient's serum, anti-cardiolipidic antibodies, the cardiolipidic antigen used as a target is present in all pathogenic treponemes but also in many animal or plant cells

VDRL is not a specific reaction of treponetoses, a falsely positive syphilitic serology (positive VDRL and negative TPHA) observed during dysimmunitarian diseases, especially during lupus and antibody syndrome anti-phospholipids

VDRL presents the patient's serum with a commercialized cardio lipid antigen previously attached to its cholesterol crystals. In the presence of antibodies, complexes form that clump together cholesterol crystals, which form more or less large aggregates, it is the size of these aggregates that defines positivity, which ranges from

VDRL is positive, on average, 15 days after the onset of canker

The title then increases rapidly to reach a plateau during the secondary phase, which varies according to the patients, usually between 256 and 1024 The

The VDRL remains very positive throughout the secondary phase

Biological monitoring of the efficacy of the treatment is done on quantitative VDRL () and is considered to be effective in terms of the title of VDRL being divided by 4 (two dilutions) 6 months after treatment.

In the absence of such a decrease, treatment should be resumed, conversely, syphilitic recontamination (the disease is not immune) can be diagnosed not only on the clinic but also on the significant upwelling of the Quantitative VDRL (title multiplied at least by 4)

Treponemic (specific) tests: use a treponemic antigen, they are more sensitive and specific than reactic tests. TPHA is not expensive and is used routinely, however, the FTA is expensive. They are a little positive before the reaction tests

The TPHA is positive around the 8th-10th days of the canker, the intensity of the reaction is rated in cross, it reaches quickly and, in the absence of treatment, will remain – until the end of life, it is therefore at ' during secondary syphilis and after the 8th-10th day of the Canker

TPHA is only very inconsevil if the treatment has been well conducted and if it has been instituted early. Beyond this period, the TPHA will remain positive

Quantitative TPHA is not a good marker of disease scalability or response to treatment, as it varies significantly from one examination to another for the same patient

The FTA is positive towards the 5th day of the canker, so this is the first test to be positive, a few days before the VDRL and TPHA

In the absence of treatment, the FTA remains positive in a high capacity throughout the first-secondary phase

To increase the sensitivity of the test, it is possible at first to absorb the patient's serum on an ultrasound of Reiter saprophyte treponemes which neutralizes the parasitic antibodies: it is the absorbed FTA 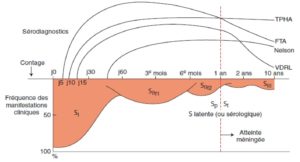 The histology of syphilis is not very specific, the image characteristic of secondary syphilis associates a more or less dense inflammatory infiltrate of the dem where lymphocytes and plasma cells predominate with vessel damage. The most common epidermal disease is exocytosis

If the diagnosis of early syphilis is mentioned: do a careful clinical examination (looking for neurological signs), look for another STI (gonococcus, C. betweenchomatis, HIV, hepatitis B…), make a prescription for TPHA-VDRL:

Follow-inp treatment: the efficacy of the treatment must be controlled clinically and biologically at 6, 12 and 24 months, biological follow-up is done on quantitative VDRL (title divided by 4 (2 dilutions) at 6 months), if not the case, the opinion of a specialist e is justified. VDRL should be negative one year after treatment for primary syphilis and within 2 years of treatment for secondary syphilis

Although the diagnosis and treatment of syphilis has become much simpler and more reliable in recent decades, it continues to generate great interest after more than five centuries. 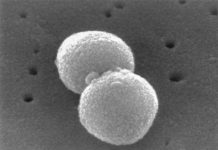