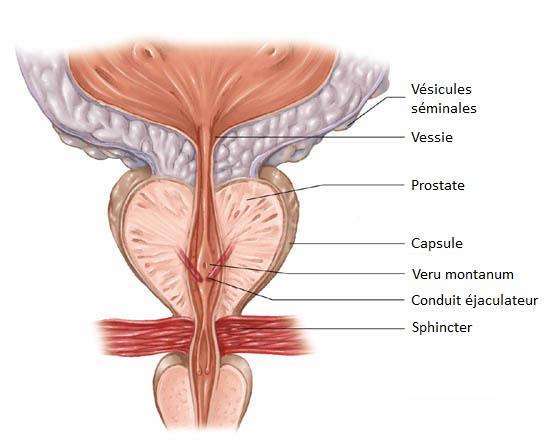 The prostate gland is an odd glandular mass, median, situated in the pelvic cavity at the junction formed by the urethra and the sperm ducts.

It is located :
– below the bladder
– above the perineal floor
– in front of the rectum between the levator ani muscles Each side behind the pubic symphysis.

It has a shape of a chestnut or a flattened cone back and forth, to lower apex, its axis is obliquely downwards and forwards.

Whitish or whitish-gray or pale pink.

Farm and regular, endured more in the elderly, easy to enjoy by DRE.

It describes him 4 faces, a base, 1 Mountain peak.
→ The faces stand out in :

→ The upper base or face : divided by a projecting bead, cross in :

→ The top-billed or prostate, rounded back and forth, and responds to the emergence of the urethra.

The prostate is completely wrapped in a tissue capsule, thin and adherent sending towards many partitions between the lobules coming together in a number of glandular masses forming "prostatic lobes". Several canals pass through such as the urethra and the ejaculatory ducts.

The lobes are different from conventional manner :
– 1 anterior lobe, pré-urethral : it is reduced.
– 2 lateral lobes : behind the urethra, behind the sperm ducts.
– 1 median lobe : or pre-sperm, situated in front of the ejaculatory ducts. The glandular lobes are formed by 30 at 40 prostate glands.

The prostate is held in place by :
– Its adhesion with the base of the bladder.
– The crossing of the urethra and sperm ducts.
– His connections with the wall of the prostate bed

The reports of the prostate should be studied :
– Inside the box
– Outside of the box.

A- The compartment of the prostate :

The prostate is contained in a box whose cellulignin fiber walls consist of :
– Forward : pre-prostatic fascia that ends up in the ligaments Pubo- prostate and below the transverse ligament of the pelvis.
– Backward : the recto-aponévrose vésicale the booth du rectum and Soudeur latéralement aux lames wash pubiennes.
– Laterally : the lower part of the blades sacro-pubic which down to the fascia average perineum and back up on the sides of the bladder.
– Up : bladder and by the fibrous connective tissue that binds the organ to the base of the prostate.
– Below : the mean plane of the perineum.

B- prostate reports within the prostatic area :

C- By l’intermediary of the prostate lodge, prostate between related :

– Laterally : The levator ani.
– Backward : the rectum, seminal vesicles, termination of the vas and the pedicles neurovascular.
– Up : the bladder, terminating sperm ducts (seminal vesicles and ampullae).
– Below : The average level of the perineum, rectal elbow.

It is under the control of the iliac artery and provided by the following arteries are branches of the anterior trunk of the internal iliac.

a- The lower bladder artery :

b- The internal pudendal artery :

Incidentally participates in the vasculature of the prostate.

Veins flow forward and laterally into the prostatic venous plexus and back in seminal plexus ; while the blood of the plexus is led by bladder veins to the internal iliac vein.

N.B : Lymph prostate are widely anastomosing with those of the bladder, the deferential bulb, seminal vesicles and rectum.

The nerves of the prostate are the hypogastric plexus.