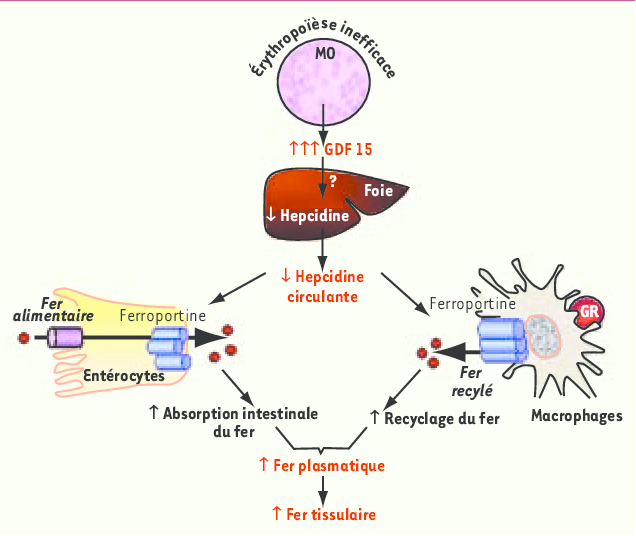 In living systems of many metabolic pathways operate simultaneously. Each of & rsquo; they must be able to detect & rsquo; state other to function optimally and meet the needs & rsquo; an organization. Quels sont les principes de buse d’intégration du métabolisme tissulaire ?

The catabolism of basic strategy is to create the & rsquo; ATP, reducing power and basic modules for biosynthesis.

last transfer their electrons to the respiratory chain to form ATP.

• The NADPH is the main donor of & rsquo; electrons in reducing biosynthesis.

The pentose phosphate supplies most of the required NADPH.

The anabolism and. catabolism must be coordinated precisely. The metabolism is controlled in different ways :

– Interactions allostériques : Enzymes which catalyze the metabolic pathway engaging steps are regulated allostériquemcnt (case of acetyl CoA carboxylase in the synthesis of fatty acids). These interactions enable them to adjust their actjvité based on detected signals.

Opposite paths such gluconeogenesis and glycolysis are subject to reciprocal regulation in such a way that & rsquo; usually a channel is quiescent when the & rsquo; another is very active.

Synthesis and breakdown of glycogen.

Synthesis and degradation of fatty acids.

Glucose is virtually the only energy molecule of the human brain, it is glueo- dependent. It has no energy reserves .11 consumes about I20g / day . which corresponds to 60% of glucose consumption by the & rsquo; & rsquo whole; body to the idle state.

Glucose is brought to brain cells by the carrier non-insuliiio depetulant glucose GLUT3.

The main energy molecules muscle are glucose, fatty acids and cétoiliques body. This is the link storage 3/4 glycogen body.

Resting, Ucides fats are the main source of energy that satisfies 85% energy needs.

During a high intensity exercise of short duration, they only use glucose. The

speed read glycolysis far exceeds that of the cycle of citric acid and most of the lactate pyruvate is reduced as it passes through the liver where it is converted to glucose (de Cori cycle).

When "read young, they use ketone bodies, or amino acids. sparing glucose for the "from" dependent luco (Red cells, white blood cells, the renal medulla, the retina….).

Triglycerides banked in adipose tissue is a huge reservoir of metabolic energy. These are essentially made to the fat cells by VLDL synthesized a liver.

In postprandial, adipose tissue uses first the foodborne glucose. If not, it consumes preferably fatty acids.

The metabolic activities "read liver are essential for the supply of energy to the brain, muscle and other peripheral organs. It can quickly mobilize glycogen and gluconeogenesis perform to satisfy their "glucose needs.

It plays a central role in the regulation of lipid metabolism. When energy is abundant fatty acids are synthesized, esterified, then directed to adipose tissue. In the fasting state, however, fatty acids are converted into ketones by the liver.

In postprandial. liver first uses the dietary glucose, otherwise it consumes "the preference fatty acids but also -cétoacidcs derived from the degradation of amino acids.

The quality and energy reserves vary from one fabric to another.

V- The metabolism depending on the power-fasting cycle and muscle activity :

There are three particular situations :

The postprandial : Those are the 4 hours after having a meal

All metabolic adaptations aim to maintain glucose homeostasis, that is to say a constant blood glucose. In the last two situations, Glucose is commonly used glucose-dependent tissues while other energy fuels (fatty acids and ketone bodies) are offered to- tissues less demanding as to the nature of the energy substrate.

Following In taking a meal, the glucose, amino acids and fatty acids are transported from the intestine to the blood. This leads through the & rsquo; increasing the insulin / glucagon ratio (l & rsquo; Insulin is secreted by the P cells of pancreatic islets l.angherans endocrine in response to the & rsquo; increased blood sugar, glucagon by Ct cells in response to the decrease in blood glucose) :

In times of young :

blood glucose level begins to decrease several hours after a meal, which leads to decreased secretion of the island & rsquo; insulin and increased glucagon secretion (decrease in the insulin / glucagon ratio) that signals the & rsquo; fasting state.

The normal blood glucose level is with inniiilcnii :

When fasting is prolonged (beyond one day) glycogenolysis runs out, lack of glycogen, lipolysis of the adipose tissue is amplified, as hepatic gluconeogenesis from glycerol and amino acids produced by muscle proteolysis triggered by cortisol.

In times of & rsquo; muscle activity :

Metabolic adaptation is triggered by adrenaline (secreted by the adrenal medulla) and noradrenaline (the nerve endings of the sympathetic system) secreted in response to the decrease in blood glucose.