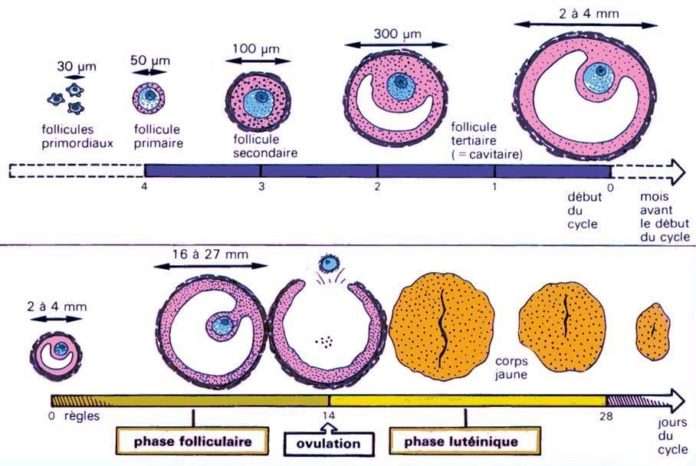 It takes place in the ovaries and includes all changes that allow the formation of female gametes, oocytes from stem cells of the germ line or oogonia.

The end of maturation is delayed. it s’completed after fertilization.

There is no differentiation phase. The female gamete is a secondary oocyte before fertilization.

She dérpule only during fetal life, of 3e T in month, in the cortical area of ​​the’fetal ovary.

the oogonia, diploid, multiply by successive mitoses. These are small cells (15 pm), round and relatively poor in organelles, without morphological difference next generations.

The number of successive divisions is not known, but forms around 7.106 primary oocytes. Each’surrounds of’a layer of follicle cells to form a primary ovarian follicle.

a- The primordial follicle :

C’is still the type of follicle most abundant on a cut of’ovary.

C’is a sphere of 50 microns in diameter which comprises :

During fetal life, it duplicates its DNA and begins meiosis. But’s evolution’stops at prophase of the 1st Division, the diplonema

In young women, you can sometimes find 2 oocytes in a follicle same, but their evolution is exceptional.

Since its formation, the primordial follicule Devient a quiescent structure here assures the survie the germ cells. At this stage, it is insensitive to external influences.

For most follicles, s evolution’stop sooner or later by a mechanism called l’follicular atresia.

The follicular atresia s’accompanied by the death of’oocyte and follicle results in the absorption.

It concerns all the follicles that commit before puberty (the very small amount of’sex hormones does not complete revolution of the follicle).

Atresia For most follicles moving during active sexual life, from puberty to menopause.

L’Complete development of follicles can be done during the active sexual life (from puberty to menopause). During this period :

The different stages of’follicle development are defined by their morphological : primary follicle, secondary follicle and follicle cavitary or antral.

The terminal stage of’evolution, after the resumption of the nuclear oocyte maturation, will be the follicle de Graaf.

a- The primary follicle :

It is still blocked in prophase, begins the great increase phase. Its size increases to 50 pm.

The mitochondria and Golgi grow. The plasma membrane villi between which emits glycoproteins will form the outline of the zona pellucida. The latter is not visible ei microscopy.

They become cut and are arranged in a single layer.

b- Secondary follicle (or pre-antral follicle or full) : 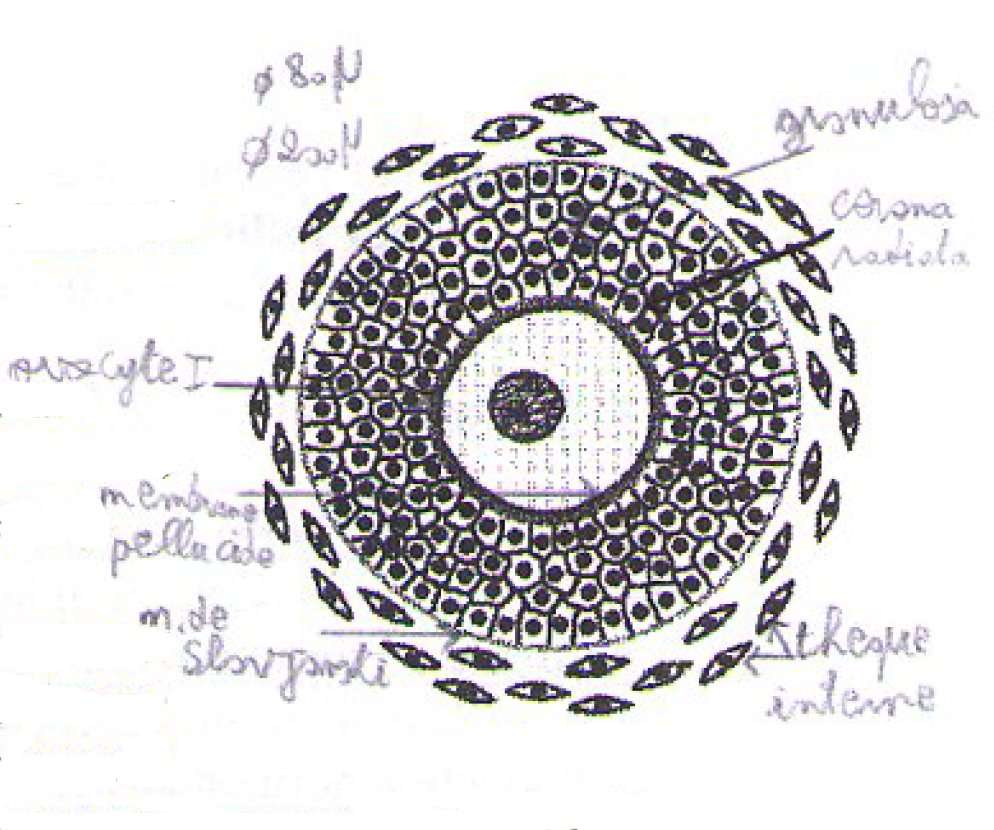 The syntheses are active. Mitochondria multiply. The Golgi apparatus and membrane microvilli grow.

The visible light microscopy. This is a hyaline structure, composed of glycoproteins whose origin is essentially oocyte (but follicular cells in manufacture a portion).

They multiply and are arranged in twenty layers around the oocyte. They are granulosa. The innermost layer, régulièrement disposée around the pellucid membrane, if nomme the Corona Radiata. The junctions between the membrane expansions of the oocyte and those of the cells of the corona radiata. The presence of these cell processes in the zona pellucida is why it appears finely striated in microscopy.

It forms around the basement membrane by differentiation of cortical stroma. Cells, initially fusiform, become cubic. They acquire receptors for LH. They will gradually take the characters cells developing steroid hormones.

At this stage, synthesis’steroid hormones, both granulosa by the theca interna is insignificant

At the end of the stage of full follicle (antral follicle pre-), it appears, au sein granulosa, small rosette formations, the « body and Call Exner ». A level, the follicular cells surrounding small cavities whose liquidiennes confluence will constitute Tantrum.

The follicular diameter continues to increase to 10 at 15 mm at the end of this stage. L’evolution of tertiary follicles can be divided into 2 steps :

– Follicle not hormonogen. His pass diameter 0,2 at 2 mm. At this stage of growth remains little hormone and hormone production is negligible.

L’endocrine activity of’ovary will be the sum of the activities of follicles present in hormonogènes’ovary at one time.

All structures of the follicle involved in the development.

It is still blocked in prophase I and reached 100 pm diameter.

In the cytoplasm, Golgi fragments and accumulation of ribosomes observed, small vesicles and multi vesicular body.

L’oocyte accumulates a large number of mRNA that used for protein synthesis after fertilization (during segmentation). L’oocyte also developing a decondensation factor that will allow the sperm nucleus to unpack after entering the’oocyte.

The continuous cell proliferation. Despite the follicle size, granulosa n’is not vascularized.

From the diameter of 2 mm. the sensitivity of cells to FSH increases. The number of FSH receptors increases under’action of’activine (also produced by granulosa, c’is a dimer of the chain of inhibin) Cell proliferation and s’speeds up to form several million cells, then the number of mitosis and decreases as the size increases follicular.

– Cells, strongly stimulated by FSH, become hormonogènes. The production’estradiol is by transformation of androgens produced by the theca interna under the effect of’aromatase

It grows by accumulating the liquor folliculi produced by granulosa cells. It is a liquid rich in hyaluronic acid

During the development of’antrum, the oocyte is discharged on the side of the follicle. It remains surrounded by a cluster of follicular cells constituting the Cumulus oophorus (Cumulus ou proliger) which keeps the egg attached to the rest of the follicle.

well vascularized, it produces androgens converted into estrogen. The synthesis of the theca interna activity is stimulated by LH and by’inhibine (produced by granulosa).

Unlike what happens in the male sex, the maturation of female gametes ends in case of fertilization. At the moment of fertilization, the oocyte is at the stage of oocyte II.

The maturation phase begins in response to hormonal stimulation by the l.h. (luteinizing hormone or luteinizing hormone). The increased production of estrogen triggers a significant increase in LH secretion (LH peak), which begins 36 h before ovulation.

Its diameter is 18 or even 20 mm. 11 bomb on the surface of the ovary and the connective between the follicle and the ovarian epithelium becomes very small.

Its size is linked to the development of Tantrum and the various external structures decreased thickness (granulosa and theca internal and external). Its evolution is conditioned by the LH surge, who (in synergy with F.S.H.) control the’ovulation.

– The core migrates to the periphery of the cytoplasm and resumes the process of meiosis. An achromatic unit (without centrioles) appears.

– The division s reductional’ends et s’accompanied by the expulsion of the first polar body (substantially simultaneously with the laying ovular). L’oocyte becomes an oocyte II. After ovulation, it will lock into metaphase 2e meiotic division.

– Cytoplasmic maturation completes the establishment of mechanisms that s’oppose the Polyspermy. L’oocyte remains bound to the cells of the corona radiata by membrane extensions which pass through the zona pellucida.

Cumulus cells secrete mucopolysaccharides, in particular the’hyaluronic acid (responsible for filance Cumulus vitro), dissociate and eventually detach from the rest of the granulosa. At the time of ovulation, l’oocyte, surrounded the pellucid membrane and the Corona Radiata, is already free in Tantrum within’a cumulus more or less dissociated.

Its volume increases rapidly. He reaches 3 at 5 ml while the diameter of the follicle can reach 20 mm.

– The LH peak directs hormonal synthesis to the production of progesterone. C’is the beginning of the luteinizing specifying if during the formation of the corpus luteum. – The proliferation s’stopped, likely due’a paracrine effect of progesterone (the follicular cells possess progesterone receptor). A the moment, there near 50.106 follicle cells. They are arranged in several layers to the inner face of the basement membrane.

It is still present. It opposes the penetration of vessels. However, at this stage, macrophages across the basement membrane. They will be involved in the development of vascularization of the corpus luteum after’ovulation.

As with granulosa, hormone synthesis changes under’effect of LH and is moving towards the production of estrogen. After’ovulation, these elements participate in the formation of the corpus luteum.

It becomes denser compression of tissue structures due to the’rapid increase in the follicular volume.

Jones II cells un de petite taille (4 at 5 pm) whose genome is equivalent to that of’oocyte II, but the cytoplasm is extremely small.

Usually, l’nuclear envelope does not reform and the cell does not divide. The division (or « expulsion polar body ») occurs at about the time of’ovulation. The polar body rest against the’oocyte in the peri-oocyte space, to’Near the pellucid membrane.

The 2e meiotic division immediately began, without inter kinetic stage, s more’stop metaphase, at the end of 6 at 7 h. C’is at the stage of’oocyte in metaphase II as gamete can be fertilized.

The release of the female gamete is ovulation.

It occurs in the middle of the female cycle, 36 h after the onset of the LH surge, at 14e day of the menstrual cycle (for a normal cycle 28 days).

L’whole cumulus s’is then detached from the rest of the granulosa (under’action d’proteolytic enzymes) and floats in the follicular cavity. C’is a viscous mass of several mm3.

L’Ovulation occurs only s’there was an LH surge before. C’is a complex mechanism, teaming up :

Under pressure from the mature follicle, the surface portion of the’ovary undergoes ischemia. L’stop vascularization was observed macroscopically on the surface of’ovary by’appearance’a small roundish area, stigma, color and transparency different from the rest of the ovary wall.

The break is brutal. It is about all the follicle wall (granulosa, membrane Slavjanski and thecae), the thin layer of connective stroma overlying the follicle outer side and’ovarian epithelium.

Upon’opening, due to the tension of the follicle and the contraction of smooth muscle cells of’ovary, content Tantrum flows abruptly to’outside, in the peritoneal cavity. The assembly formed by the oocyte II and its envelope is driven. It is recovered by the flag of the trunk, covering the ovary at this time. L’ovulation is accompanied by a small amount of bleeding of the ovary wall.

Fertilization takes place in the fallopian. If it does not occur, the egg degenerates after 24 ish.

Immediately after the’ovulation, the follicle becomes a temporary endocrine gland. I iaunet body luteinizing). He wrinkles due to sagging. The cell mass is penetrated by vessels. The granulosa cells and theca interna alter their hormonal syntheses and become luteal cells, and para developing luteal progesterone and some estrogen. This luteinization elements is controlled by the peak l.h. preceding’ovulation.

WE- MIGRATION IN THE OVUM GENITAL TRACT :

At the time of’ovulation, the flag of the trunk, mobile, covers the’ovary. It recovers’oocyte IL Proper mobility tubal pavilion is essential for reproductive function.

Migration is passive. It is facilitated by :

During this trip, cumulus partially dissociates. 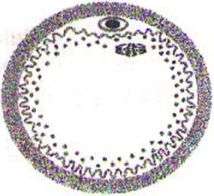 It is a spherical cell 150 pm diameter, relatively inert, no synthetic activity. it n’has not completed its nuclear maturation. It is a secondary oocyte (n chromosomes et 2n ADN), blocked in metaphase 2e meiotic division. It is surrounded by envelopes

Fecundability of’oocyte (ability to merge with the male gamete) is conditioned by the degree of nuclear and cytoplasmic maturation (blocking metaphase 11).

Of the’oocyte towards the periphery, on distingue :

a- The perivitelline space :

This is a clear very small space, except in the area of 1is polar body. This contains 23 separate chromosomes, without replenishment of its nucleus.

b- The areas pellucid :

It is a layer 15 at 20 d pm’thickness, consisting of glycoproteins. Electron microscopy, it has a very fine fibril structure. It involves 2 different density layers, the densest layer of the side of the oocyte. It is crossed by gaps, which are the locations of the cell processes which are retracted.

Against the outer face of the zona pellucida, a contiguous layer of cells forms the corona radiata. Around, are cells of Cumulus. Intercellular spaces are wide and occupied by a viscous substance composed of glycoproteins and’hyaluronic acid