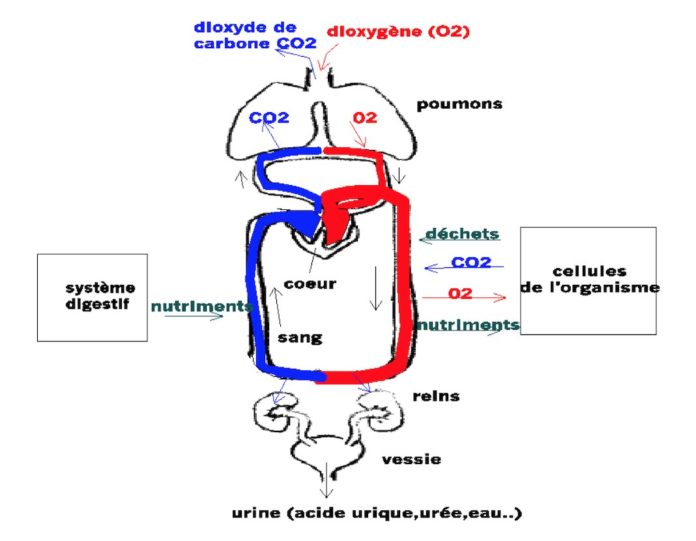 Breathing is defined by the set of mechanisms for the transport of respiratory gases :

O2 ambient air to the cells and its use in carbohydrate metabolism and other organic molecules and the removal of CO2 oxidative metabolism terminal product.

Indeed cellular metabolism can be conceived (functional unit of the organism) without supply of oxygen and, Consequently, without the production of carbon dioxide.

All these processes are coordinated with other functions of the body thanks to a complex regulation ensured primarily through the respiratory centers.

A physiologically ventilatory system is as a loop constituted by an active system which exerts stresses on a passive system that undergoes deformations which result in changes in volumes or rates, all under nervous control exercised by the respiratory centers.

GENERAL ORGANIZATION OF THE UNIT VENTILATORY :

Crossroads aérosanguin complex structure, the lung is composed of two or three lobes, whether right or left ; each lobe is divided into several segments compounds by the association of several pulmonary lobules ; finally comes the acinus representing the lung functional unit (conduit assembly pendant to a terminal bronchiole)

In the inspiration air enters the respiratory device with the nose or through the mouth to traversed successively : pharynx, larynx , the trachea and bronchial tree last .

a – the nose : represents the basic element of the inhaled air conditioning system (humidification, heating and filtration) unavailable to the protection of the bronchial mucosa.

The anatomical arrangement of the nasal cavities (narrows between many folds of the mucosa) also creates a high resistance to air flow. The palate offers much less resistance but does not allow the air conditioning inspired.

In the effort can become mouth ventilation to reduce the work that is necessary to mobilize large airflows.

b – pharynx : common passage area with food and air, the pharynx is characterized by its wealth of muscles whose activity holding open against a negative pressure created by the diaphragm during inspiration.

c – larynx : acts as a valve which prevents food from entering the trachea, increasingly involved in phonation (vocal cords)

e – Innervation : innervation of the airways is ensured by the vagus nerves and the fibers of 4th and 5th first sympathetic ganglia. These nerves form plexus at the hilum or emerging nerve networks.

The innervation is distributed to the following :

A third system was recently individualized to the pulmonary and digestive system level called non-adrenergic non-cholinergic (Syst. NANC) characterized by several neurotransmitters such as : VIP , NO

There are three types of vascularizations :

a – systemic circulation : is bronchial feeder traffic originating from the aorta

b – petite circulation : the right ventricle ejects the mixed venous blood through the pulmonary artery to the pulmonary exchanger to undergo oxygen enrichment and depletion of carbon dioxide (hematosis).

The entire oxygenated blood is conveyed through the pulmonary veins to successively reach the left atrium and the left ventricle, which will distribute it to the different parts of the body.

c – lymph circulation : localized either at the sheath conjunctival peribronchovascular, either at sub pleural.

The pleura is a serous unites the lung to the chest, it comprises two sheets (visceral and parietal) separated by a virtual space containing a very thin layer of fluid film : pleural fluid thereby allowing the sliding of the two sheets one over the other. The visceral layer is subject to pulmonary retraction forces, the second that of the retraction of the rib cage.

The pleura is subjected to hand pressure gradient on either side of these two layers. This feature prevents air or fluid accumulation between these two components in physiological conditions.