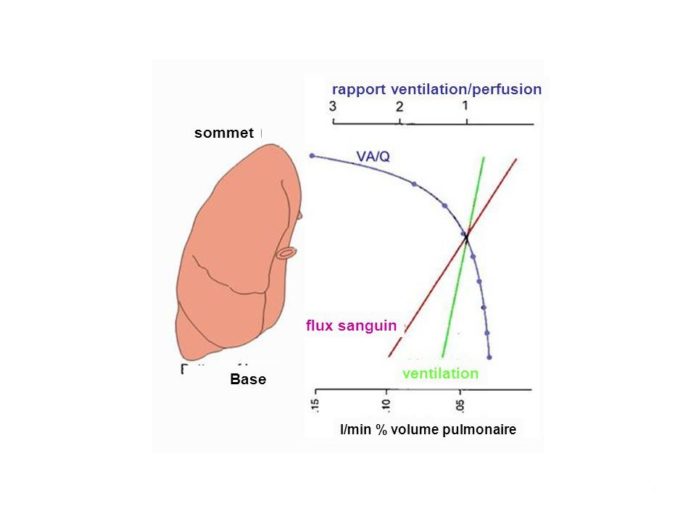 distribution inequalities explain the power of the lungs to adapt their function to the different physiological situations same extreme as the & rsquo; physical effort by recruiting and poorly ventilated areas or poorly perfused at rest

To understand the different values ​​of this report in a lung upright, it is necessary to & rsquo; explain the regional distribution of the two parameters that define namely alveolar ventilation and pulmonary perfusion

B- Regional distribution of alveolar ventilation :

Alveolar ventilation VA is to differentiate the overall ventilation VE, because for the measure is necessary to subtract the volume of & rsquo; dead space VD tidal volume Vt before multiplying all the Fr respiratory rate :

Upright, under the & rsquo; gravity weight of the viscera of the & rsquo; abdomen pulls the pleura down explaining more negative pleural pressure at the apical regions compared to lower areas so that the most distended alveoli atop receive less d & rsquo; s air & rsquo; inspiration.

The distribution of lung perfusion increases upper to lower parts of the lung.

To understand this distribution the lung is divided vertically into four zones :

Zone 1 : upper part of the lung

PA>Pac>Pv : which explains a crushing of the pulmonary capillary

NB : while the top of the cell can not receive blood perfusion : alveolar dead space

Pac>Pv>PA : the capillary is distended, infusion is optimal

There is a reduction in capillary perfusion related pleural pressure less negative approaching zero positive view explaining that the small vessels are not stretched. 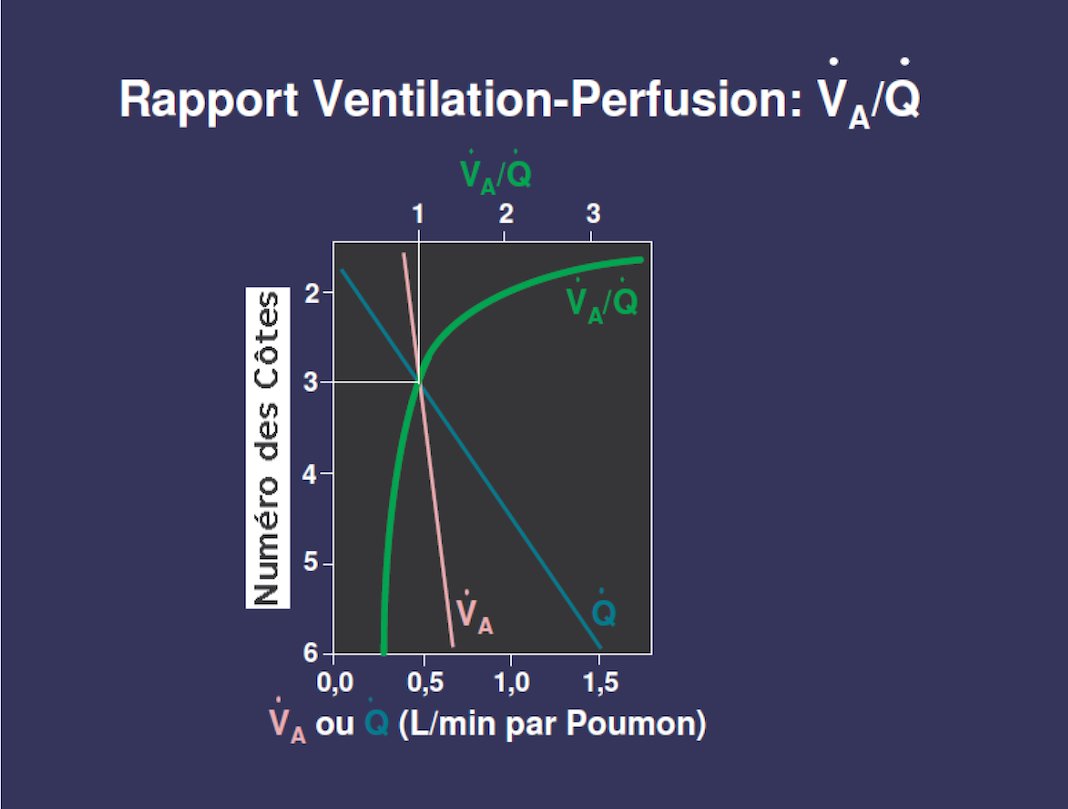 F- Extreme inequality in the distribution of ventilation-perfusion ratio :

If ventilation is void in an area the ratio is equal to 0, This corresponds to an effect schunt opposed the ic true anatom shunt that s & rsquo; observed when veins pours direct part in arteries and contam inant without arterial.

Either normal ventilation is zero infusion, the ratio is equal to & rsquo; infinite, what defines the & rsquo; indeed dead space

Note that the exaggerated inequalities in the distribution of ventilation-perfusion ratio represent the most important cause of & rsquo; hypoxemia