During the Cell Cycle, Rejoinder cell contents and then divides into two giving :

Duplicating P DNA results in the formation of two identical daughter molecules with one another and the parent molecule.

– These mechanisms are similar in prokaryotes and eucaiyotes. 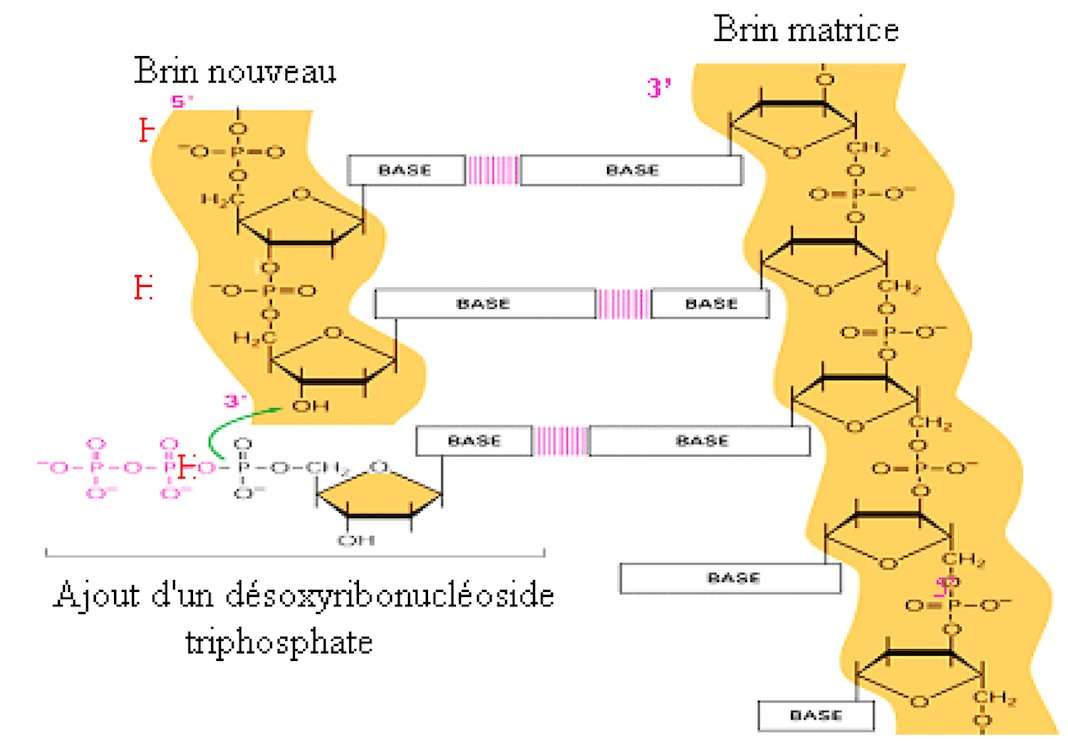 The parent compound gives one of its strands to each daughter molecule, which is complemented by a newly synthesized chain. 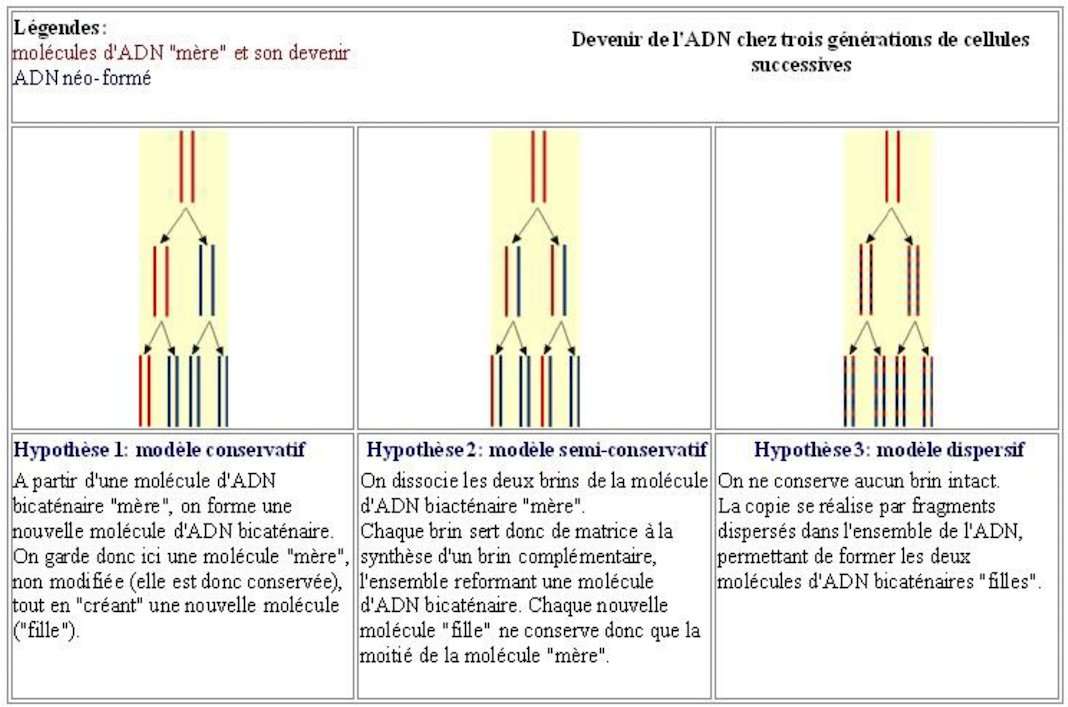 Experience Meselson and Stahl itself :

To highlight the semi character- conservative of the replication of the’DNA of bacteria grown for several generations in a medium containing nitrogen molecules 14N are subcultured on a medium containing nitrogenous molecules 14N. Fractions are collected at regular intervals. L’DNA is extracted, placed in a cesium chloride solution and centrifuged 24. The position of DNA is identified by measuring optical density beyond.

– at t = Q : a single band corresponding to the DNA construction 15N

– After two generations in the medium containing l4N : appearance’a band having a density intermediate between that of heavy DNA1 *N and that of the light DNA l4N (hybrid DNA), which means that DNA molecules are formed from’original heavy unbnn and d’unbnn light neo synthesized.

– After three generations in the medium containing l4N : appearance of two bands, a corresponding hybrid (heavy, lightweight), l’other corresponding to molecules made up of two light bnn.

NB :
There is only one replication ongin in prokaryotes, while there are several eukaryotic

The synthesis of the new bnn d’DNA always runs in the 5 ’to 3’ direction:

– the bnn read in the opposite direction of the fork gives rise to the discontinuous strand (late or secondary strand) synthesized in the form of small fragments.

Each replication fork is thus asymmetrical

A- The different proteins involved : 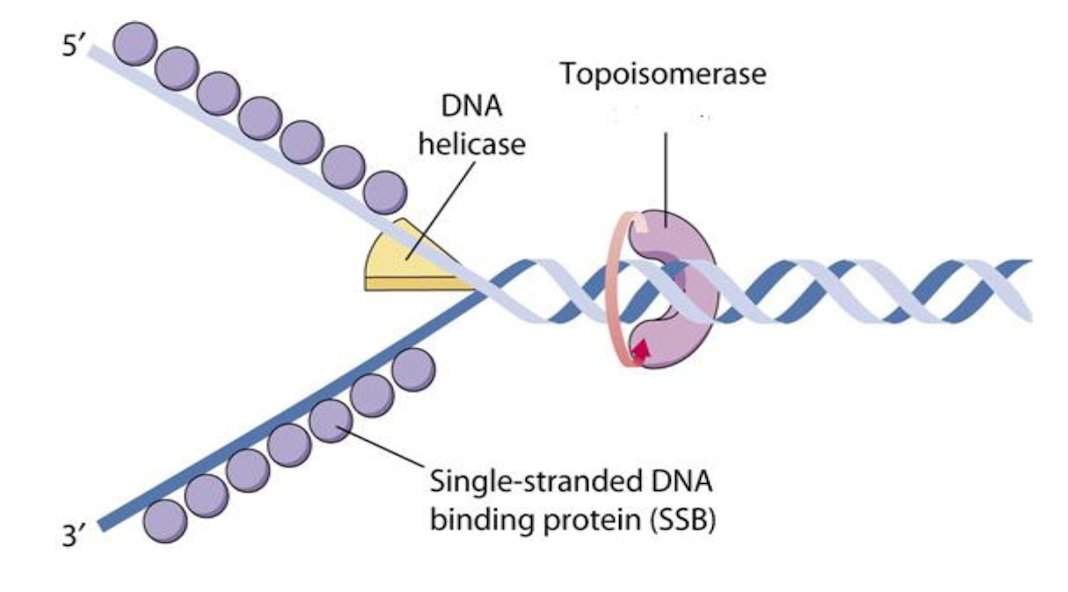 ■ Topoisomerases : Decrease significantly the winding rate of DNA. They are 2 types :

– The enzyme catalyzes the formation of a phosphodiester bond between the free 3'-OH group of the last nucleotide beyond growing chain and the 5 'phosphate group of the nucleotide to be incorporated: the choice of nucleotide integrate respects pairing rules bases with the template strand (In paired with T and G with C paired).

– a primer (primer) as acceptor of dNMP incorporated into the new strand.

* ADN polymérase I a 3 functions :

B- The steps of replication :

On the leading strand :

On the lagging strand :

– A single stranded DNA sequence must be exposed

– A segment is synthesized in the reverse direction (relative to the movement of the fork). A series of these fragments (fragments d'Okasaki) from 1000 at 2000 Pb is synthesized each from 5 'to 3' (synthesis discontinuous).

– They are then connected to each other to give rise to a delayed intact strand.

– The template strand of the discontinuous strand must be wound to allow the DNA polymerase to replicate and move in the same direction as the fork.

On the leading strand :

– 1 single initiation event at the origin

On the lagging strand : 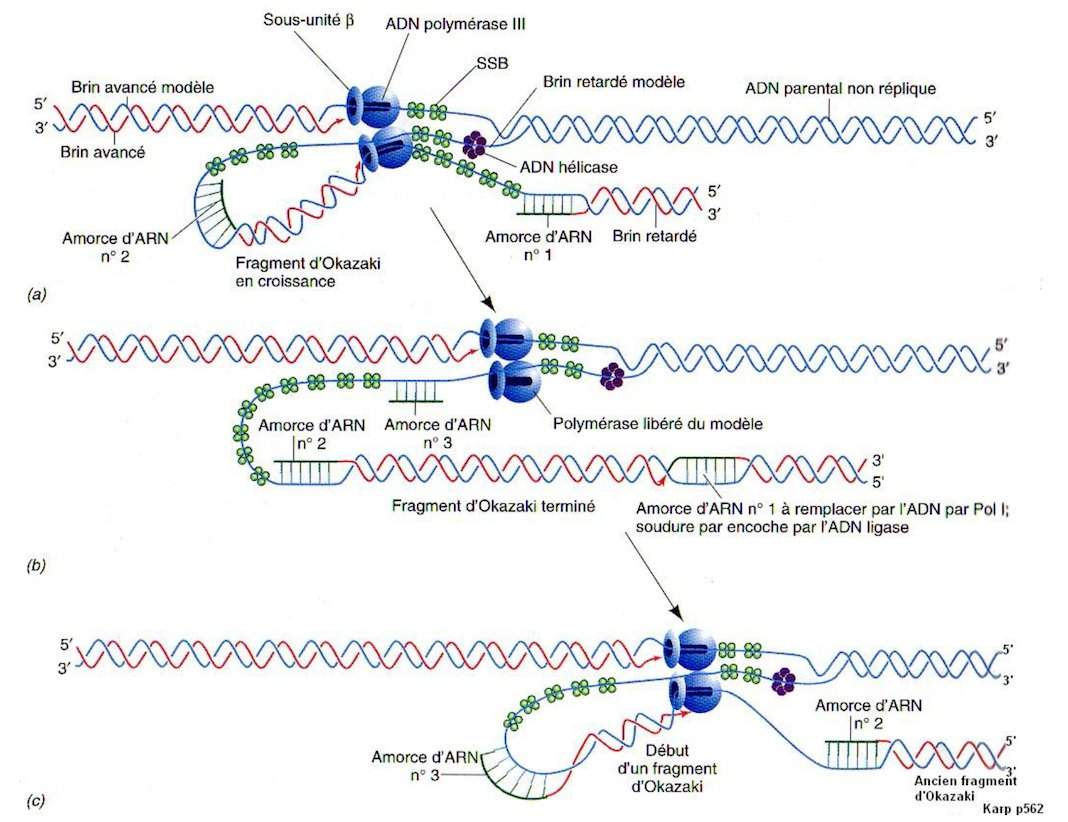 IV- Differences between eukaryotic and prokaryotic :

V- The replication in eukaryotes :

The DNA replication in eukaryotes takes place during the S phase of the cell cycle.

– Replication begins at replication origins. The T antigen recognizes this initiation site, it fixed and causes the opening of the DNA double helix by its helicase activity ; In the RP-protein binds to the single-stranded DNA regions to prevent their reassociation.

– L'DNA polymerase α (Pol a) synthesized RNA DNA primer of each continuous strand and each strand batch, through its primase activity, followed by a DNA fragment 20 at 30 nucleotides thanks to its DNA polymerase activity.

– The RF-C protein (replication factor C) recognizes the template-primer complex and recruits the PCNA protein (Proliferative Cell Nuclear Antigen) which causes the replacement of DNA polymerase α by DNA polymerase δ or DNA polymerase ε, the latter shows the synthesis as T antigen helicase function as continuously and that the topoisomerase I relaxes the voltage to the replication fork.

– When synthesis 2 copies is completed, topoisomerase 11 décatène the 2 chromosomes.

the replication of the’Circular mitochondrial DNA is not limited to the S phase of the cell cycle.
It uses two replication origins and involves an intermediate structure 3 strands
The DNA polymerase is responsible for Gamma LADN mitochondrial replication whose
Replication is independent of T nuclear DNA.

the replication of the’Mitochondrial DNA is controlled by nuclear genes and involves
Many protein factors. 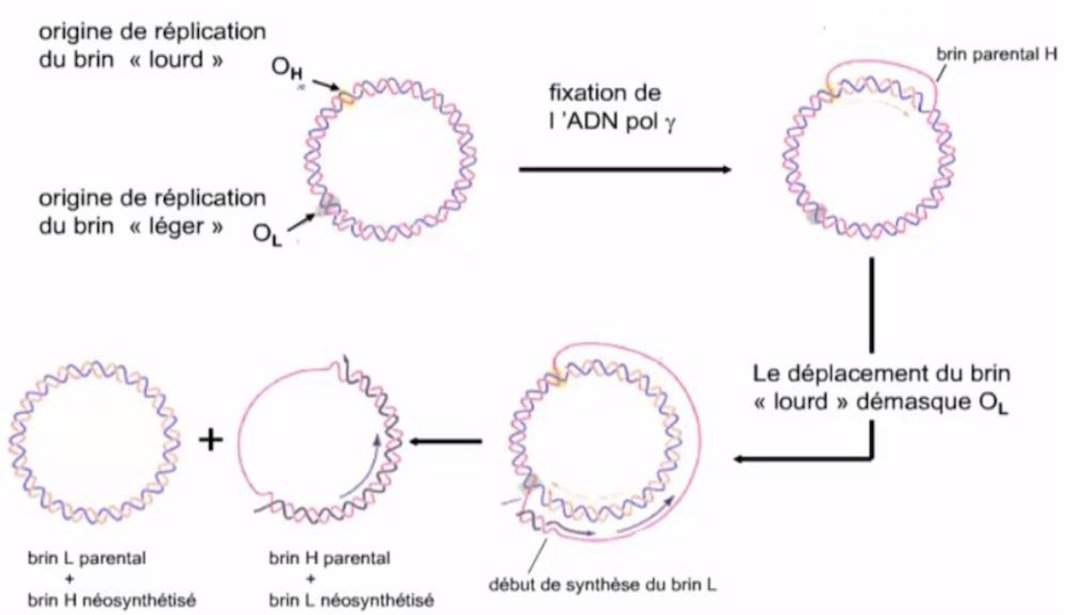