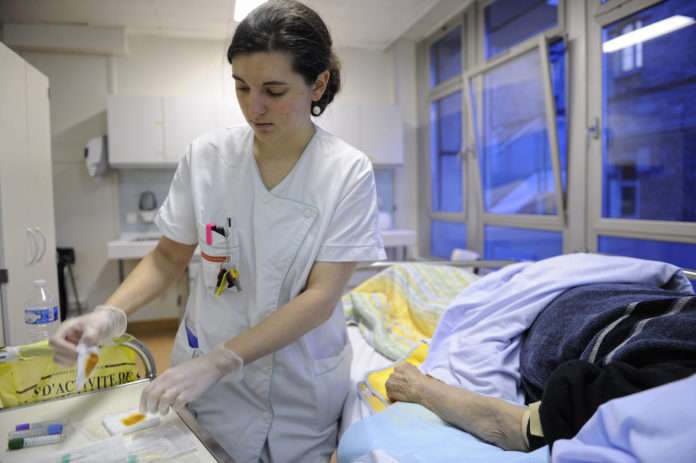 Biological risks are related to exposure to biological agents in the workplace. Biological agents are present in all work environments. Most of them are harmless to humans, However, some can cause more or less serious diseases : infections, allergies, poisoning and even cancer.

The bacteria are the most numerous beings, but only some of them are pathogenic for humans. These are microorganisms composed of a single cell (1 at 10 microns), enforme rod (then called bacilli) or round shape (called shells). Gram stain differentiates these bacteria : some appear in purple (they are called Gram-positive), d & rsquo; other pink (Gram- negative). They multiply at high speed and when external conditions are unfavorable, they can sporulate and become very resistant.

These are the smallest infectious agents from one-tenth of a micron, only visible by electron microscopy. They consist of a capsid containing genetic material DNA or RNA. They are obligate intracellular agents, they must invade the cell in order to multiply.

Microorganisms living in the & rsquo; interior and at the expense of & rsquo; an organism of another species, they can reach considerable size, up to several meters, some are parasites responsible for serious (malaria, toxoplasmosis). There are two main groups :
– protozoa (unicellulaires) : consisting of a cell with nucleus, having a great diversity (from 10 micron 2 cm).
– Helminthes (pluricellulaires) : to flattened or cylindrical measuring of 50 micron 8 meters.

They can be transmitted by insect bite, orally or through intact skin.

Microorganisms (1 at 100 microns) can be dialed d & rsquo; a cell (yeast) or more cells (The molds). Only a few are pathogenic for humans. They form spores to resist the poor living conditions and when favorable conditions return the spores germinate and form filaments (spawn).

The fungal spores (or fungal spores) disperse easily and participate in their big release into the & rsquo; environment.

These are not cells but protein, they are a

separate group. These are unconventional transmissible agents, their size varies around 0,01 micron, responsible for transmissible spongiform encephalopathies (degenerative diseases of the nervous system

Central among the & rsquo; man and animals). Their exact nature is not yet known.

NB : Are considered biological pathogens, the biologics groups 2. 3. and 4.

A- The risk of infection :

Infection is due to penetration, Installation and multiplication in a living from a pathogenic biological agent body, the cause of many infectious diseases. According to the biological agent involved, the expression of infectious diseases is highly variable :
– In their location (skin lesion, pneumonia, icterus…).
– In their gravity (fever, cardiac complications or lung …).
– In the time of appearance (a few hours, days or months).

There are two types of toxins produced by biological agents that are responsible for toxic effects :
– Les exotoxines : produced either by mostly bacteria during infection (anthrax toxins, tetanus, Diphtheria…), either by mold. Mycotoxins can persist in the environment, long after the disappearance of mold.
– endotoxins : that are components of the cell wall of Gram negative bacteria, released during cell division or in the death of the bacteria. They persist long after the death of bacteria.

Allergic manifestations due to biological agents, can be skin allergies and rhinitis often, asthma or lung diseases to hypersensitivities. The effects of these threshold varies from one individual to another and, for the same individual, this threshold may vary over time.

some infections, when they become chronic, can cause cancer. So, when hepatitis B or C does not heal and becomes chronic, it sometimes progresses to liver cirrhosis which can over time become complicated with cancer.

WE- THE MODE OF TRANSMISSION :

In the workplace, the transmission can be done by air (inhalation), in contact with skin or mucous membranes, inoculated (accident, bite or insect bite) or enterally.

The potential host is at the end of the transmission chain. In the workplace, it is the worker, which may be contaminated and may develop a disease if exposure is enough and if it is not protected.

A- ACTING ON THE SOURCE OF INFECTION :

Preventive measures should primarily focus on the origin of risks, therefore on the reservoir :
– Detecting a sick "reservoir" in a community and quickly implement isolation measures.
– Prevent the formation of a reservoir exp : (vaccination of animals, screening and treatment of sick animals…).
– For most risky activities, clean to prevent the proliferation of biological agents.
– For some sectors (health, food…) disinfecting and / or sterilization where necessary.
– Fight against the proliferation of insects and rodents could spread the pathogen.

B- ACTING ON THE MODE OF TRANSMISSION :

Medical monitoring of workers takes place in hiring and throughout the professional activity. When visiting hiring, the occupational physician informs the employee on biological hazards related to the exercise of his profession and means of prevention to avoid contamination. In addition, it provides useful information about the symptoms that may indicate infection and what to do.

This information must allow the employee to alert his doctor about a possible occupational symptoms for which it would need to consult.

Vaccination of workers before they rise to positions at risk.

– Gather information on employee exposure conditions, based on clinical examination.
– Prescribe additional tests if necessary.
– Renew information on the employee's occupational exposure (including biological agents) and collective and individual preventive measures adapted to their workstation,
– Remember the rules of personal hygiene participating in this prevention,
– To review vaccinations.

Before any work accident : AES (injury by contaminated objects, projection of Biologics), request a review in light of the risk, establish antibiotic treatment, serum therapy and vaccine therapy. Act the same way in case of infectious syndrome in search of possible contamination upon contact with sick.

Before any affection, think to declare the disease within the compensable occupational disease, if it appears on a table repair or professional nature and, as part of the accident at work if it is an AES or any accident exposure to biological agents.