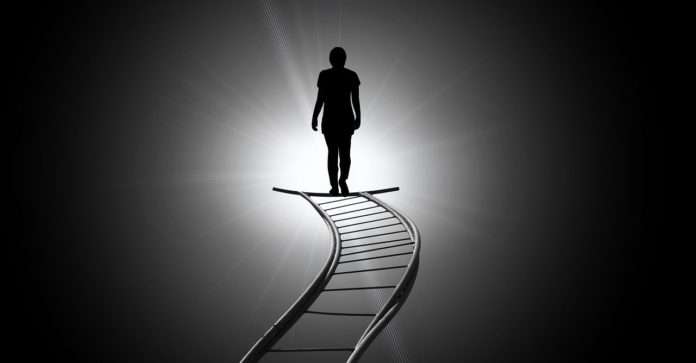 I- Introduction and Definition of Death :

This is the science that studies death in all its aspects, especially forensic perspective. It describes death and research to know its mechanisms and causes.

This is a mandatory step that must undergo every living, characterized by the complete and permanent cessation of vital functions , with disappearance of its functional consistency and in particular the electrical activity of brain ( tracé E.E.G plats ) , and progressive destruction of its tissue and cell units until its dust transformation .

– lysis of the nucleus.
– cytoplasmic vacuolation.

The ability of tolerance is higher in children.

This diagnosis is based on two categories of signs , to know :

This is an early diagnosis of death based on an external examination of the body and laboratory tests.

These judgments will be confirmed by auscultation of both devices and palpation of the arterial routes .

Also called the late signs of death or cadaveric phenomena.

The result of the fall of the central body of the T ° in relation to several factors, inter alia, the room T °, the applicant's health before his death.

They correspond to transudations blood through the vessels as passive phenomena driven by gravity.

their coloring, can move towards the cause of death.

It results from the loss of body water is responsible :

It is the result of the attachment of molecules of actin with myosin molecules (in relation to the absence intracellular ATP).

It affects all the muscles of the body and begins .

It begins about 05 hours after death, it peaked at 18 hours.

If it is broken before the 18 th hour, it can recover.

Putrefaction is the decomposition of organic tissues under the predominant influence of the bacteria hosted by the individual, especially those of the intestinal flora, Then fungi that invade the body.

It begins with the appearance of the abdominal patch of green rot at the right iliac fossa, 48 hours after death sometimes more in winter, it results from the transformation by the action of bacteria, hemoglobin (rouge) a sulfhémoglobine (vert).

Putrefaction greatly complicates the task of the pathologist, through :

This time can not be calculated after calculating the postmortem period ( D.P.M) is subtracted from the time of collection of the parameter used for this purpose , examples :

The dating of death may be from :

No assurance can be drawn from these .a simple assessment methods can be advanced with caution.

The concept of brain death has emerged since the onset of resuscitation, allowing maintains cardiac function, in respiratory and renal a subject vital functions are completely and definitively abolished.

– Abolition of the corneal reflex
– mydriase aréflexique
– disappearance of swallowing
– no blinking the threat, no reactions to noises or to nociceptive stimuli in the territory of the trigeminal.

Each record must be at least 10 minute normal range, double, and maximum.

Often, it is the fatal outcome of disease, the deceased was followed and his death does not surprise also measure.

accidental : death related to accidental trauma. The causal link is evident .if the accident circumstances are not suspicious, there is no need to check < Forensic obstacle>.

Suicidal : suicidal character can be established only after investigation and careful examination of the dead body. The investigation should be interested in the psychiatric history and treatment.

Differential diagnosis with a criminal act must always be analyzed, in doubt, you must check the box : obstacle.

criminal : if the criminal action is obvious. Example : wound firearm weapon nearby.

WE- The Attestation of Death and Medical Certificate of Death :

The death certificate is an obligation of the physician with respect to one who has died, family and society.

Au plan social, death interests the advertising department is always informed of all the dead who are not natural.

It also looks vital that fits in every town the list of citizens.

Writing of the death certificate within the competence of any doctor.

The death certificate certificate is written on paper, in accordance with the general rules of writing this document.IL two parts :

The 1time said portion nominative, is for the office of civil status; it includes the identity of the deceased (last name, first name, age, sex, and the time, the data and place of death), the doctor will certify that death is real, constant and of natural causes or unnatural causes (violent or suspicious death).

The 2th part is the medical certificate of cause of death itself, this part is anonymous, he asked the doctor to identify the direct cause of death (condition, homicide, suicide or accident).this part is for the Ministry of Public Health. It will allow epidemiologists to statistics on causes of death.

In case of natural death, the officer of civil status will keep the registered party, and send the anonymous party to the Ministry of Public Health, to issue the burial permit unobstructed by forensic.

In case of unnatural death, of the registrar will notify the appropriate authorities to investigate and burial will be allowed until after investigations Forensic.

The declaration of death must be submitted within 24 hours of death.

No burial can be made without authorization on paper Officer Vital.

The death certificate will be drawn up by the officer of civil status in the city or the death occurred after the declaration of a relative of the deceased or that of a person with accurate information on marital status.

In case of suspicious or violent death, burial can not be done when a police officer assisted by a medical doctor has drawn an official report on the state of the body and the circumstances surrounding the death.

Courses of Prof. B. Bensmail – Faculty of Constantine

sudden death in the & rsquo; adult