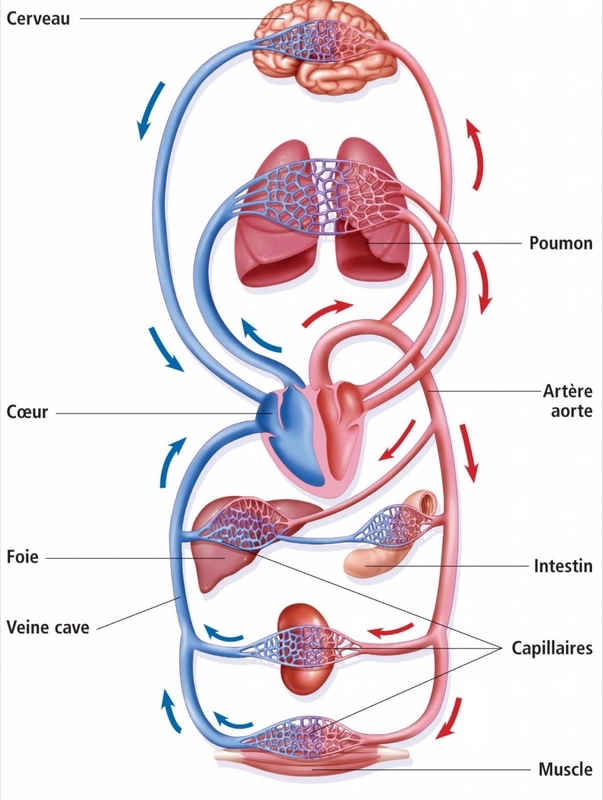 The respiratory function of the blood is the transport of respiratory gases : lung tissue for oxygen, in opposite direction to the carbon dioxide.

This transport is mainly through a hemoprotein contained in the red blood cell called : Hemoglobin (Hb).

B – and dissolved gas partial pressure :

Each breathing gas is found in the blood in two forms :

According to Henry's Law the amount M of a gas X dissolved in a volume V of fluid at atmospheric pressure :

F is the fraction of each gas in the mixture.

C – Transportation of gases in the blood :

Oxygen after broadcast of the cell to the pulmonary capillary is transported by the blood to the peripheral tissues in two forms :

Knowing that the oxygen solubility coefficient is 0.023, the quantity of the latter conveyed by 100 ml of blood is 0.3 ml, which represents a very small fraction of the total oxygen transported.

It is obvious that this form of transport is insufficient for the human and an additional transfer mode is required.

The binding of oxygen to hemoglobin is linked to the partial oxygen in a sigmoidal curve from said pressure curve or dissociation curve Barcroft oxyhemoglobin CDO.

The saturation increases rapidly initially, from 60 mmHg the slope of the curve is low and therefore an important change in P02 changes little saturation.

With the flattened top of the Barcroft curve a moderate lowering of P02 hardly affects the amount of oxygen transported.

P50 represents the partial pressure of oxygen at which the saturation is equal to 50 %, it is equal in physiological conditions 27 mmhg.

The increase in temperature, ions H + (effet Bohr) , from PaC02, the concentration of 2-3-diphosphoglycerhaldéhyde (2-3 DPG) causes a displacement of the curve to the right .

For the same P02, saturation is less, there is a decrease in the affinity of hemoglobin for oxygen where additional release of oxygen by hemoglobin, for fabrics.

So, locally when a muscle group increases its activity and thus its temperature, its H + and C02, there is increased release of oxygen by hemoglobin. We are in this case before a fine example of physiological adaptation.

The opposite changes in these factors cause an increase in the affinity of hemoglobin for oxygen.

It is not necessary to trace the curve of Barcroft, to study these phenomena.

P5o allows to give an exact idea of ​​the affinity of hemoglobin for oxygen.

Several physiological parameters for oxygen transport are to know :

this is the maximum volume of oxygen that may be fixed 1 gram hemoglobin or 1,39 ml. Decreased by smoking, Pollution

Represented 10 % of the total fraction transported

In the presence of an enzyme called carbonic Anhydrase "AC" dioxide reacts with water to form bicarbonate according to the reaction Anderson Hasselbach :

This rapid reaction in red blood cells is slower in the plasma due to the absence of I AC.

So after crossing the red cell barrier most of the C02 (70 %), spring form bicarbonate thereby increasing the plasma of the buffer.

The hemoglobin is reacted with carbon dioxide to form the carbamate (a combined transportation) according to the following reaction :

The assessment of the blood chemistry is based on a widely used practice exam called gasometry.

The arterial blood sampling is usually done at the radial artery that is easily accessible. Sometimes the arterial puncture site is at the earlobe as consumption of oxygen at this level is practically zero ; thereby blood collected is characterized by a composition very close to that from the arterial compartment.

The various parameters studied will include :