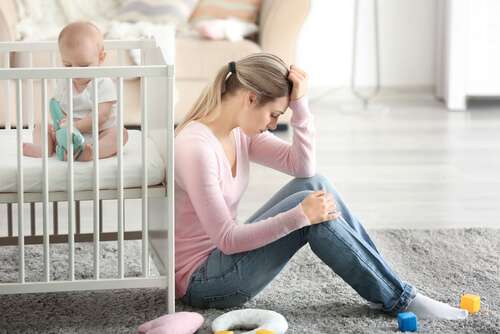 The sequence d & rsquo; a pregnancy and the birth of & rsquo; s children & rsquo; accompany any woman to affective changes that originate in the body changes and psychological alterations inherent in purpéralité,many factors may compromise the & rsquo; accession to successful motherhood : factors related to the biological terrain, to & rsquo; individual history and the & rsquo; organization of the personality and factors situationnelstenant to women's relationship to their spouse environment, family, social and cultural environment.

L & rsquo; anxiety tends to decrease during the 2nd quarter in the weeks before the & rsquo; & rsquo s birth, anxiety and sleep disorders are common.

Among the psychological disorders is noted :

L & rsquo; depression of the first quarter may be the & rsquo; d & rsquo worsening; a pre-existing condition or anxious is the first manifestation of disease in a woman previously balanced.

We found a positive correlation between the occurrence of & rsquo; gestational depression and young age of the pregnant to lower 20 years, l & rsquo; ambivalence vis-à-vis pregnancy, absence of the stable couple, emotional isolation, material hardship. S melancholic depression :(rare) generally occurs in the 2nd half of pregnancy,near term, it takes a confounding and delirious pace, may continue during the first weeks postpartum.

Psychoses of pregnancy would 5 as frequent as psychoses post- partum.

A dramatic birth where women s & rsquo; felt in danger and / or gave birth to a dead child or disabled ^ int starting d & rsquo; PTSD. (At & rsquo; & rsquo opportunity; another pregnancy traumatic symptoms are waking up to the 7th month (anxiety, dysphorie, nightmares, phobia d & rsquo; sleep, the risk of recurrence of & rsquo; obstetrical accident is high.

The "postpartum blues" has : asthenia, somatic complaints, Crisis iterative tears or prolonged, pessimistic ruminations related to newborn with "fear of not knowing s & rsquo; deal" or "d & rsquo; be overwhelmed"

L & rsquo; mood is unstable Password dysphoria anxious to jubilationintense, difficulty concentrating, memory disorders. Some difficulties in the beginning of & rsquo; breastfeeding reinforce his sense of & rsquo; disability and plunged into disarray. Contemporary lactation "postpartum blues" is attributed to hormonal upheaval the puerperium.

The sudden deflation estrogen and progesterone in the 1st day results in destabilization of the neuronal metabolism.

L & rsquo; French school speaks of "puerpurale psychosis" which has the following characteristics :

→ schizophrenic States :
+ Sometimes the puerperium seems to have precipitated the & rsquo; disease in women and rigid schizoid personality until well adapted,
+ 10 at 15 % post-partum psychosis can progress to schizophrenia.

The depression in the mother rang on & rsquo; child abuse can lead to serious behavior.

Psychosis and major depression after abortion are rare of that postpartum psychosis probably because the neuro-hormonal changes are less.