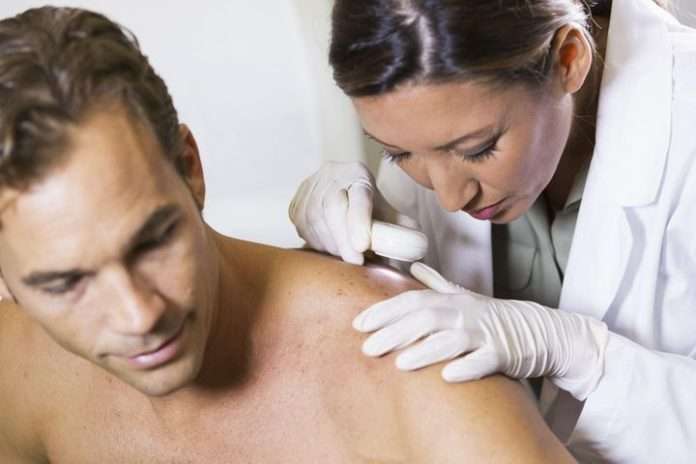 – Basal cell carcinomas (CDS), the most common (9/10 of skin carcinomas in the immunocompetent) which are slow-moving, mainly local tumours that never metastasize.

aggressive and can metastasize. They account for 1/10th of skin carcinomas.

These are the most common and least aggressive skin cancers (no metastasis). The CBC affects about 150 individuals per 100,000 people per year in France.

They sit with predilection on the face (exposed photo areas) and spare the mucous membranes. Many clinical forms exist; most are brought together by a common element:

The pearl. It is a translucent, whitish papule or nodule, covered with fine telangiectasies with a hair type (A vessel forming a red line).

Even in difficult diagnostic forms, a characteristic beaded border is sometimes present.

There are several anatomo-clinical varieties of varying severity:

Thand nOdular CBC is a firm, well-limited, smooth, rounded tumour. This is the most common form (60% of cases).

The hisperficial CBC (10 to 25 per cent of cases) – in situ in the epidermis, very slow evolution: erythemato-squamous oval lesion or very limited erythemaous erythmatous lesion.

The pygmiesnted or tattooed forms are related to the presence in the tumor of melanic pigments and represent a difficult differential diagnosis with other pigmented lesions.

The ulcertive shapes, cut to the peak, sometimes bordered by a beaded bulge. When the tumour invades and destroys the underlying tissues (cartilage, bones, etc.), it is a so-called &quot;errating" form.

ScreadOdermadermiform CBC (2 to 3 percent of cases) associated intense fibrosis with tumor proliferation and came in the form of a poorly limited infiltrated atrophic closet. Its surface is whitish and its limits clinically imprecise as histologically. This form recurs more often.

If the diagnosis of skin carcinoma is often made clinically, it will usually need to be confirmed by a biopsy that will allow a histology.

– The CBC is growing slowly.

– It does not cause metastasis (neither lymph nodes nor visceral), but has local invasive potential that can lead to significant tissue destruction. These advanced forms may require the use of mutilating surgery with sometimes heavy functional and aesthetic consequences.

– The treatment of choice is surgery because it allows a histological control of the part of exeresis and thus allows to affirm its completeness or not.

They are schematically reserved for inoperable patients or for certain locations. This is essentially radiotherapy and cryosurgery (liquid nitrogen). The 5-fluoro-uracile cream may be proposed to treat multiple superficial lesions. Other treatments are transforming the management of CBC: Imiquimod cream – Aldara has obtained an AMM in superficial baso.

– It is based on photoprotection and regular monitoring of patients at risk.

– After treatment of any form of CBC, regular monitoring (every year for life) is recommended to detect a recurrence of the lesion, but also because of the high risk of developing new skin carcinomas or even melanoma.

These are faster and more pronounced locoregional malignancy tumours than baso-cells and can be a source of metastasis.

Sun exposure is the main causal factor, in the form of a cumulative dose. The sun is responsible for the formation of precancerous lesions on photo-exposed skin, called frequent actinic keratoses after age 60 in patients with clear phototypes.

Unlike the CBC, EC often occurs on a precancerous lesion. The most common are:

– old scars of deep burns and other scars (exceptional);

They consist of localized accumulation of keratin, in the form of a small hard yellow-brown column: they can either correspond to actinic keratash (pre-epitheliomatous lesion) or a true CE: A histology is preferable.

B- There are three clinical forms:

– The superficial form or Bowen's disease

Any CE must be considered potentially aggressive. Adenopathy will always will beed in the drainage area. It usually precedes visceral metastases.

– The treatment of choice is surgery because it allows a histological control of the part of exeresis and thus allows to affirm its completeness or not. The margins are wider than for the Baso-cellular.

– Other methods: This is primarily radiotherapy.

It is based primarily on the photoprotection and regular follow-up of patients at risk as well as on the treatment of precancerous lesions in particular actinic keratoses.