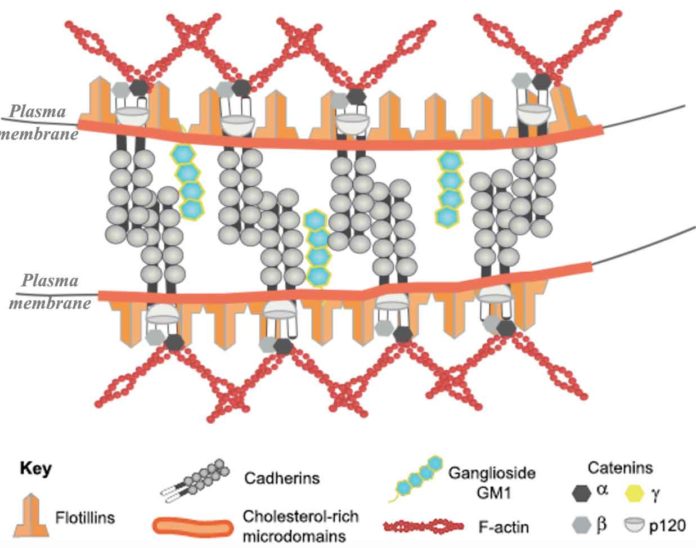 Cell adhesion is an essential function that higher organisms have acquired to allow tissue formation, organs and systems that strive to meet the physiological functions necessary for the survival of the individual.

There are two types of morphology :

It is important to note that all cells produce extracellular matrix, whether of bacterial or plant origin, and its existence is not only related to the multicellular state of the organism,

1) Components of the extracellular matrix :

Polysaccharides are mainly represented by two types of molecules :

The fibrous proteins are mainly represented by two types of molecules :

Other glycoproteins are present in the extracellular matrix, among them there are fibronectin, and more particularly at the level of the basement membrane laminin.

The basal lamina is a differentiated region of the extracellular matrix, located at the base of epithelia or around certain cells such as endothelial cells, fat cells, muscle cells and Schwann cells. It consists of laminin, GAG, proteoglycans, type IV collagen and other glycoproteins.

The basal lamina being in & rsquo; interface between different tissues, it has a filter function, allows the seat cells (epithelial and endothelial) and control the localization of membrane proteins.

Immunoglobulins are monomers of the same superfamily as antibodies, also having a heavy chain and a light chain, with closed loops by disulfide bonds. They are rich glycoprotein sialic acid and have thirty members, whose N-CAM present in the nervous system.

Immunoglobulins are calcium (That ; independent, unlike other adhesion molecules, and are constitutively expressed at the plasma membrane, ie permanently. They realize homophilic houses but can be done with various members, as well as heterophilic bonds with proteoglycans of the extracellular matrix and integrins.

Cadherins are glycoproteins as monomer, having an N-terminal extracellular end and calcium (That2+) dependent. The different types of cadherins are tissue specific.

These molecules play a key role in intercellular junctions desmosomes kind. In this way their intracellular C-terminal ends interact with dense plaques or directly with cytoskeletal proteins, and their extracellular N-terminal ends realize homophilic and heterophilic interactions with other cadherins, integrins and extracellular matrix proteins.

In tissues, cells inhibit their own growth by interacting with each other and this thanks to the presence of cadherins that are responsible for this phenomenon called contact inhibition.

Selectins are glycoproteins as a monomer having an N-terminus- terminal extracellular. Selectins are lectins calcium (That2+) dependent have the specificity to recognize carbohydrate moieties other glycoproteins.

Selectins allow the brief bond formation and very high specificity. They are not always expressed, but requires activation resulting crumb its endocytosis. They are involved in heterophilic interactions during diapedesis.

Integrins are glycoproteins as a dimer (Up) having an extracellular N-terminus and being also caicium (That2+) dependent.

Integrins interact with components of the extracellular matrix and the basement membrane such as fibronectins, laminin and collagen. They also interact with heterogeneous interactions with immunoglobulins and cadherins, and intracellularly with the cytoskeleton.

Intercellular junctions are differentiated regions of the plasma membrane responsible for cell adhesion and at which can be seen a high concentration of adhesion molecules. Among them we distinguish the tight junctions (closed on Toolbar), the intermediate junctions (ou Zonula Adherens), les desmosomes, gap junctions (nexus or gap junction-type).

These junctions are present in the animals, but not in plants and bacteria that are bound only by their walls. They provide mechanical strength on the one hand and a cellular communication secondly.

The zonula-occludens are tight junctions which surround the cell, hence the term "zonula", at the apical pole and this especially at the epithelial monolayers (endothelium cells and polarized for example in the enterocytes and hepatocytes). 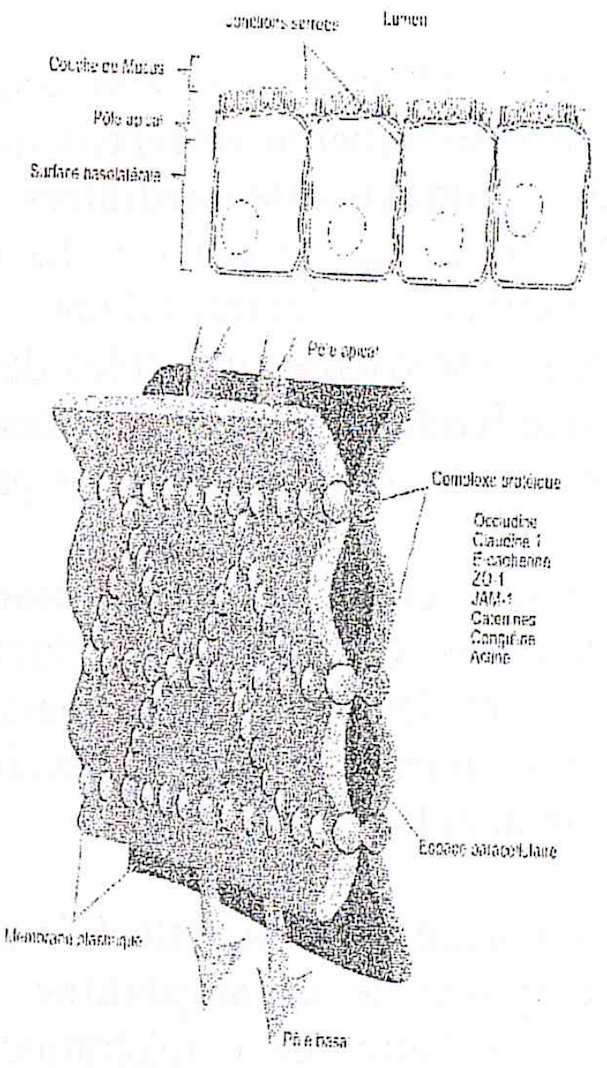 They created occlusions which completely forbid the lateral diffusion of proteins ; the intercellular space is completely closed off.

They consist of occludin and waddled which are independent of calcium molecules and immunoglobulins whose JAM (Junctionnal Adhesion Molecule).

The cytoplasmic side there are ZO specific proteins called proteins that interact aves molecules of the junction on the one hand, and allows the anchoring of actin microfilaments (cf. cytosquelette) d & rsquo; other, and thanks to cingulin who plays the role of adapter protein between ZO and actin microfilaments.

b) The intermediate junctions (ou zonula-adherens) : 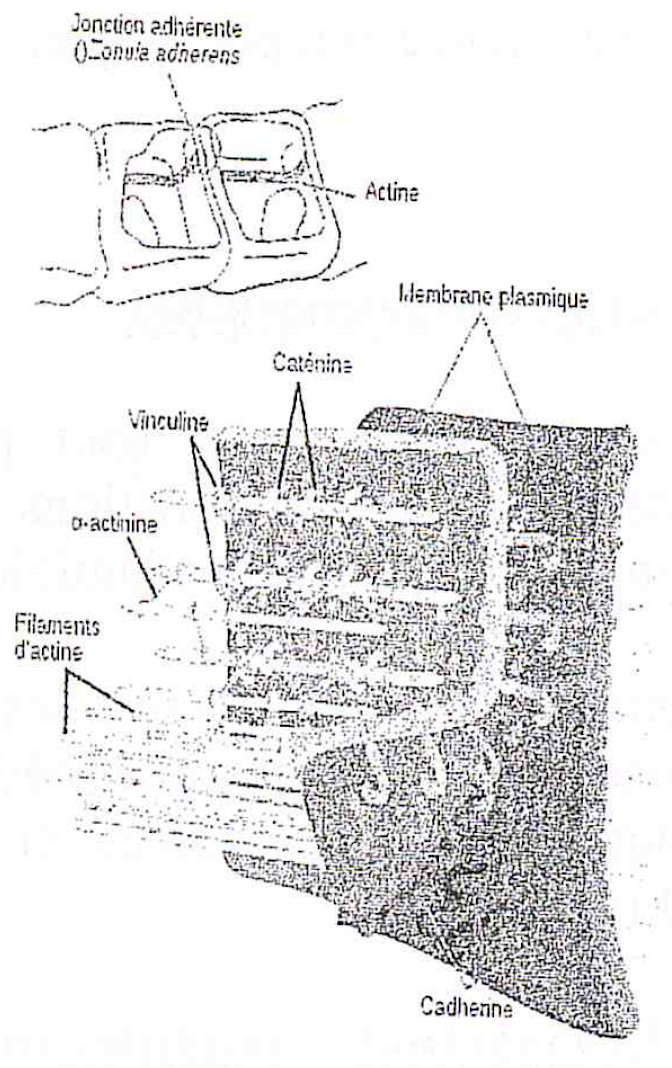 The zonula adherens-are junctions which surround the cell at the apical pole, located just below the zonula-occludens. They are located at the polarized cells and leave a larger intercellular space as tight junctions. 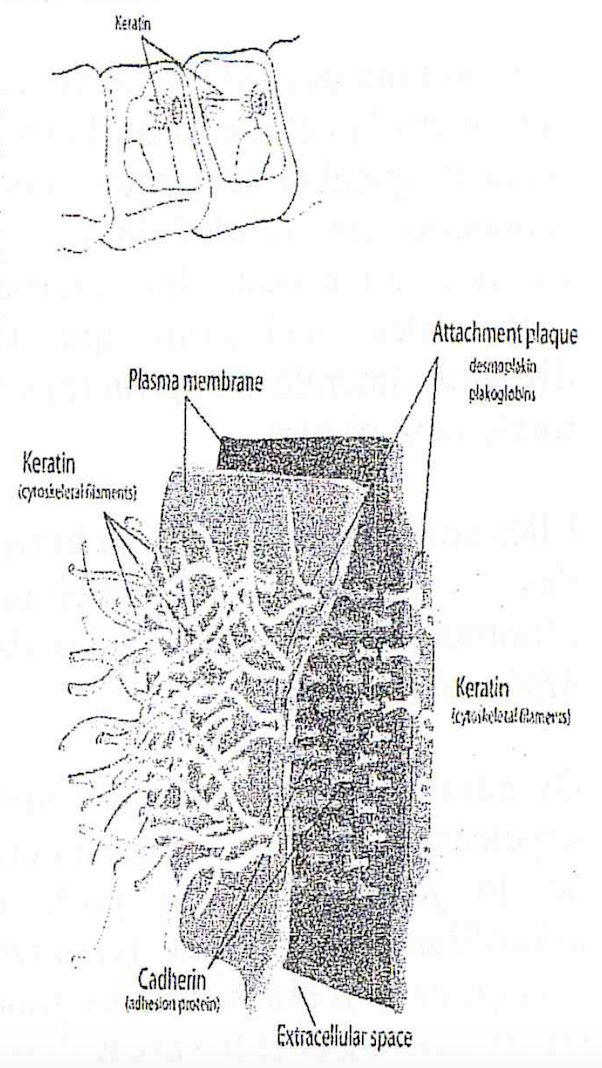 Desmosomes are this time more zonulas, but-macula adherens which are anchoring zones of intermediate filaments in the form of task, hence the term "macula". They allow the formation of intercellular junctions, unlike the hemidesmosomes which created the junctions between cells and basal lamina. Desmosomes are found mainly in the epithelia, but not exclusively.

They are composed of desmocollin and desmoglein are cadherin (dependent calcium) Specific forming homophilic interactions and heterophilic therebetween, as well as molecules of the immunoglobulin superfamily.

The dense plate this time a rounded shape and is composed of desmoplakin, which bind the cytokeratin intermediate filaments. It is important to note that two molecules are an intermediary between transmembrane molecules (desmocollin and desmoglein), and molecules of the dense plate (desmoplakine) : plakoglobin and plakophilin.

e) The junctions kind of nexus (or gap junction) :

At the nexus is observed intercellular space 2 at 3 nm. They are found at the side faces of the epithelial cells and also non-epithelial cells (fibroblasts, muscle cells, bone cells, neurones, etc.).

They are composed of hundreds of bidirectional channels by combining to each other from a cell and the other. Each channel is formed of a connexon 6 subunits, in which each subunit is a connexin having 4 segments transmembranaires. The nexus allow intercellular metabolic cooperativity depending on the concentration gradient (ions and small molecules) and allows, and the transfer of & rsquo; information (second messengers such as cyclic LAMP, calcium Ca2 + and certain enzymes).

These junctions are not expressed in a constitutional manner but have clemi- lives around 24 hours. Regulating the permeability depends on the concentration of which varies nexus cellular activity. 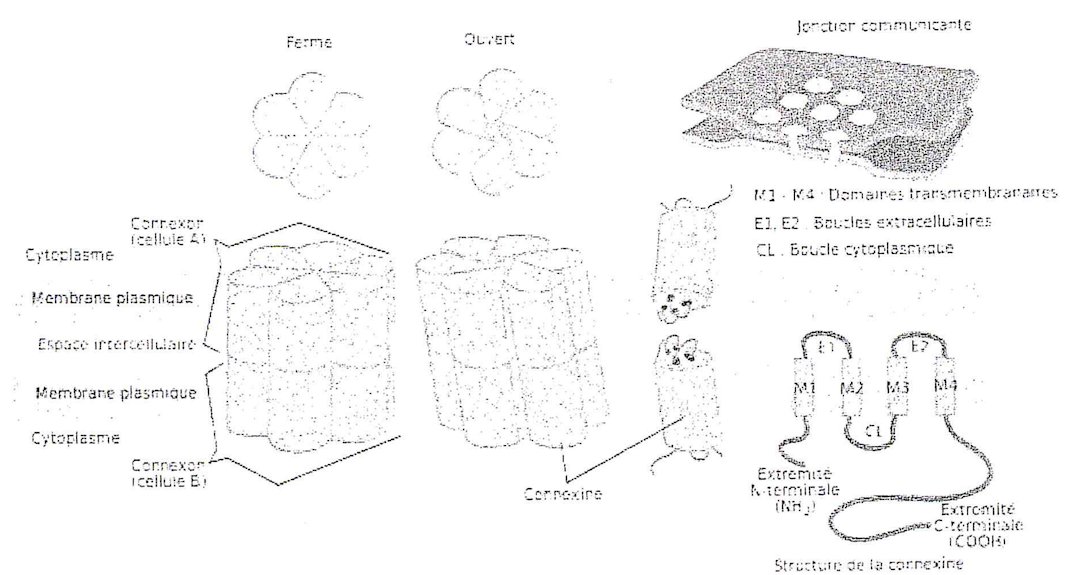