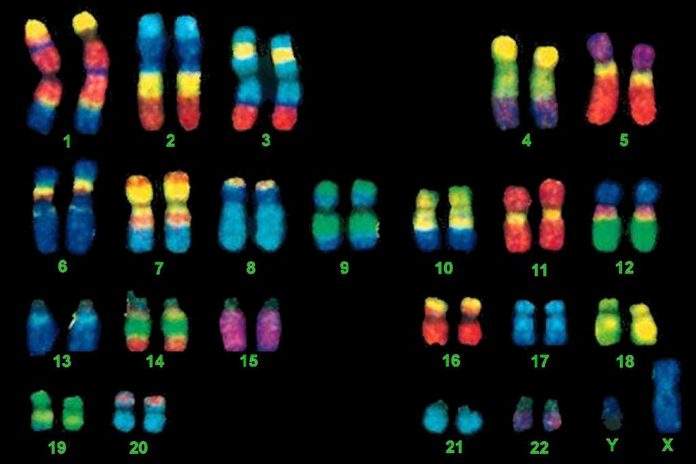 Cytogenetics is the medical discipline that studies chromosomal abnormalities in the constitutional genetic diseases and cancers. The correct enumeration of human chromosomes established only 1956 scored his departure. The introduction of chromosome banding techniques, then hybridization techniques in situ and now genomic microarrays has enabled considerable development of cytogenetics that has become an important element in the diagnostic approach, in assessing the prognosis and risk of recurrence of these diseases.

The term refers to the digital karyotype and structural analysis on the set of chromosomes of a cell or an individual .11 is specific for a given species.

III- Realization of the karyotype :

The human karyotype is performed in cytogenetic laboratories from different tissues ;

Depends on the indication of the karyotype.

We sampled age of pregnancy :

The karyotype is determined on blood lymphocytes venipuncture.

The karyotype is done on nucleated cells capable of dividing in vitro : "Principle of cell culture techniques"

The conventional technique is as follows :

The human karyotype has 46 divided into chromosomes 23 pairs,22 pair are identical in men and women and are called autosomes, the remaining pair is represented by the named sex chromosomes are gonosomes :
– The XX chromosomes in women.
– XY chromosomes in humans.

The classification of these chromosomes is based on two criteria, which are:

From these facts we classify the chromosomes into seven groups in descending order of size 1 at 22 :

Recent labeling techniques identify each chromosome pair of alternating light and dark bands ;these bands are listed in a internationale.Chaque chromosome arm Nomenclature is divided according to its size in 1 at 4 regions,each region bands and sub bands numbered from the centromere to telomere exp 6 p21,2;means the second sub-band of the first band of the region 2 the short arm of chromosome 6 and decides:

The blades which are fixed on the chromosomes are soaked in trypsin;there there's denaturing parts of the chromosome that become almost white while the non-denatured portions are noires.les dark bands correspond to DNA sequences rich in A-T low in active genes.

The bands obtained are the reverse of those obtained with the trypsine.Les dark bands correspond to DNA sequences rich in G-C ,rich in active genes.

To visualize telomeres .After denaturation , chromosomes are classified and ranked analysés.Le chromosome pairs results in the karyotype of the individual which it is possible to infer the chromosomal formula according to a well-defined nomenclature :

– Before a clinical picture evocative of known chromosomal abnormality.
– In front of a malformation syndrome difficult to diagnose.
– During sexual ambiguity,

in front of:
– sexual development disorders and growth.
– Mental retardation and behavioral disorders. c-In adults
– Parents or family child with an abnormality in chromosome structure.
– Couple having had several miscarriages.
– Personal or family history of fetal death or malformations réccurente.
– Balance sheet before medically assisted procreation.

C- INDICATIONS OF CANCER IN KARYOTYPE :

The major indication of the karyotype is the diagnosis of certain cancer diseases in particular hematological malignancies .11 can also have a prognostic value and constituted a marker of tumor progression.

WE- The karyotype abnormalities :

They result in a change in the total number of chromosomes .The most common trisomy and monosomy.

Were the most common chromosomal abnormalities in humans,they are defined by the presence of an extra chromosome karyotype three exam please I then includes 47 .Touts chromosomes chromosomes may be affected and most trisomies cause early abortions,néaumoins , holders of trisomies gonosomal (47,XXX;47,XXY;47,XYY) or trisomy 21 are viable in the long term.

Lack of chromosome.La only viable monosomy is monosomy X or Turner syndrome.

The chromosome number is a multiple of the haploid (23)

In humans , these anomalies are rarely viable and it is possible to detect in some cancer cell.

B- Abnormalities of structure :

There are two types :

the most common Robertsonian translocation t(13,21)

C’is the loss of’a fragment of a chromosome. phenotypic expression depends on the size and gene wealth of the deleted segment .11 Two types:

At the end of a chromosome.

On the inside of an arm of chromosome telomeres are respected .the.

A chromosome is part .This duplicate copy has returned phenotypic partielle.l'expression trisomy depends on the duplicated segment.

C’is the 180 ° rotation of a chromosome fragment resulting from two breaks on the same chromosome. There are two types

The two break points are on two different arm of chromosome;inversion therefore interested in centromere.

The two break points are on the same chromosome arm, the inversion does not involve the centromere

C’is the result of two terminal deletions occurring on the same chromosome l’one on the arm p l’another on the arm q resulting in the welding of the ends of the centric segment and the loss of the deleted segments.

The anomalies are said to be homogeneous when all the nucleated cells of the’individual have the same chromosomal formula.

– The anomalies are called mosaic when coexist in the same individual at least two cell populations of different chromosomal formulas .From the point of view Nomenclature ;the different cell populations are indicated one after the other and separated by a diagonal bar.