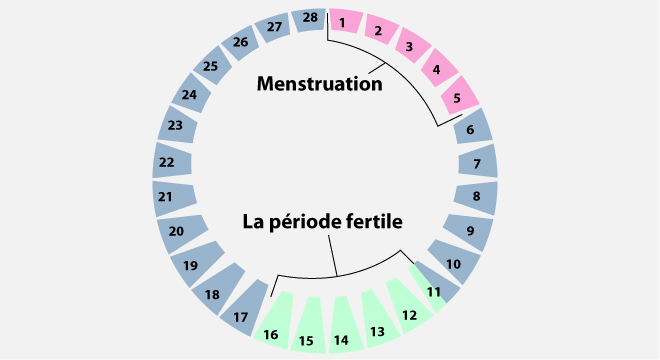 Throughout the active genital life, l’histological appearance of the surface layer "functional" of’endometrial varies from day to day according to a regular cycle : periods. The cycle lasts 28 days but can vary, it begins at puberty to 12-15 years and continues throughout reproductive life of women.

The menstrual cycle is the sequence of a set of physiological phenomena regularly repeating outside the periods of pregnancy, from puberty to menopause, the start of a menstrual period at the beginning of the following for an average of 28 days. it s’is :

B- PHASES OF MENSTRUAL CYCLE :

The menstrual cycle is characterized by 3 cyclic phases which follow one another continuously.

The breaking of the spiral arteries causes’haemorrhage.

Small hemorrhages occur in the territory of each artery, in the form of small local hematoma 0.5 2 mm diameter, each hematoma bleeding during 90 So the minute’menstrual bleeding is a long process and takes several days.

The glands of the functional layer in necro-ulcerative stage, are then removed by fragment, deep areas stand to 4th or 5th day, to’exception of the basal layer, alone, persists. At the same time, l’endometrium begins to regenerate by re-epithelialization of the surface of the basal layer and continuing the cycle resumes.

Some women experiencing cycles shorter or longer than 28 days. These variations in length occur during the follicular phase, since ovulation has always held the 14th day before the first day of menstruation, regardless of the cycle. Before 40 years, anarchy cycles can be the consequence of a hormonal imbalance or malfunction of the thyroid. Some women may have anovulatory cycles, c’is to say without ovulation. Past 40 years, l’irregular cycles is the sign of’entry of women in the peri-menopausal stage. The disappearance of the rules can also s’observed in some women. This is often the case in very thin women, suffering’anorexia or to very restrictive diets that aim to remove lipids.

Stimulated by FSH and LH, endocrine cells of’developing ovarian steroid hormones from cholesterol among these hormones :

The hormonal regulation in women s’carried out as follows : L’adenohypophysis, stimulated by GnRH releases FSH and LH.

FSH and LH cause changes on’ovary, who go, in turn, produce estrogen and progesterone.

L’anterior pituitary begins to secrete the progressively increasing amount LH and end of follicular maturation stages, LH will stimulate differentiation of cells of the theca interna, which will in turn secrete estrogen. FSH and LH work synergistically : or FSH or LH acting isolation, can cause follicular growth.

2- By the middle of the cycle : ovulation

The gonadotropins cause dissociation of cumulus oophorus cells, the resumption of the first meiotic division which s’ends in a few hours. Thirty six hours after the peak, l’II oocyte is released. L’ovulation is due to mid-cyclic discharge of LH and FSH or discharge gonadotropic [peak pituitary LH and FSH]

3- During the post-ovulatory luteal phase :

after ovulation, the follicle remnants change under the’influence of l.h (that continues to be secreted by’hypophyse) in an endocrine structure : the corpus luteum begins to secrete progesterone and especially the little’estrogen.

For ovarian hormones:
– estrogen, low early in the cycle, their rate s’student and there is a significant spike 12 at 24 hours before’ovulation. In luteal phase, there is an increase in estrogen followed’decreased during menstruation.
– Progesterone rate varies during menstrual cycle : it is very low throughout the pre-ovulatory phase, s’student after’ovulation up’at 8th day luteal phase, then declines, up’to menstruation.

THERE is a "synergy’action "between estrogen and progesterone: l’action of progesterone can not s’exercised on a prepared endometrium by estrogen.

S’No it is not fertilizations, to the 24th cycle day, the corpus luteum s’atrophy, production’estrogen and progesterone ceases abruptly and the endometrial lining sheds : these are the rules.

And, on the other hand, there fertilization, the corpus luteum persists and with it, the presence’high levels of progesterone : rate that will be maintained until’at an advanced stage of pregnancy, the embryo develops a hormone the’HCG (gonadotrophine chorionique ) which ensures the survival of the corpus luteum. The corpus luteum is a gestational corpus luteum and continues to secrete during 6 estrogen and progesterone weeks, will be taken over by the placenta (pregnancy test based on the presence of’HCG detectable in the urine of pregnant women .L’HCG modifies the immune response of’uterus overlooked embryo : l’uterus behaves as if the embryo n’was not a foreign body.

1- At the beginning of the cycle :

A peak’estrogen triggers a surge of LH and FSH causing the’ovulation : Feed back positif.

It was the luteum formation and secretion of increasing amounts of progesterone and’estrogen. When the estrogen plus progestin increases rates, it triggers a negative feed back on FSH and LH

The braking of the secretion of FSH and LH causes the regression of the corpus luteum which results in that the rate of ovarian hormones reaches its lowest value ; c’is menstruating.

Because of’collapse rate of ovarian hormones, FSH and LH secretion wakes up and the cycle resumes.

2- The woman with tumor of’this pituitary gland, among the many disorders, l’lack of rules. L’pituitary acts on a woman's menstrual cycle.

In postmenopausal women, there is a significant increase in FSH and LH. L’ovary has feedback on’hypophyse.

L’injection’a precise dose’estradiol in a mouse quickly produced a slight decrease in FSH levels in the blood followed’a massive increase in LH levels. L’estradiol exerts a negative feedback on FSH secretion and a positive feedback on the LH.

– FSH (Eng., abrév. to follicle stimulating hormone). Syn. hormone folliculostimulante, follitropine. Glycoprotein hormone of molecular weight 31 000 daltons, secreted by the cells of gonadotropin’anterior pituitary. FSH is, like LH and’hCG, consists of two polypeptide chains, alpha and beta. The alpha chain is common to all three hormones, while the beta chain gives each of’They its biological and immunological specificity. FSH secretion is cyclic in women, but present in both follicular and luteal phases of the menstrual cycle; it stimulates the maturation and function of granulosa cells. FSH secretion is stimulated by GnRH, modulated by sex steroids, depressed by’inhibine.

– LH (Eng., abrév. luteinizing hormone for). Syn. luteinizing hormone : Glycoprotein hormone of molecular weight 29 000 daltons, secreted by the cells of gonadotropin’anterior pituitary. LH secretion is cyclic in women, with an increase in late follicular phase, a preovulatory followed by a decrease in luteal phase. LH acts on many gonadal cells, by promoting the synthesis of sex steroids; in women it occurs in a privileged way in’ovulation. LH secretion is stimulated by GnRH

iss in ovarian follicles, in the corpus luteum, L’physiological action of estrogen s’exerts on the genital tract and female sexual characteristics at puberty.