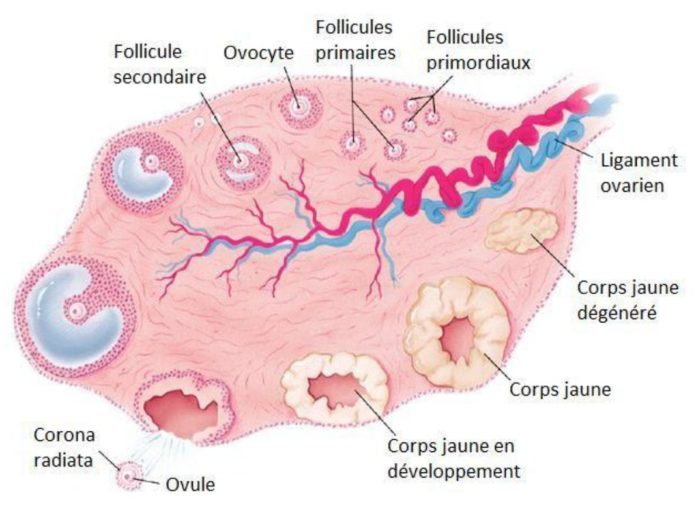 Gametogenesis is gamete formation process in 2 sexes. It takes place in the genital glands, testes for males and ovaries for females. It concerns a particular cell line, germline (her seed), as opposed to all the other cells in the’organization, grouped under the term somatic cell (the Soma).

These are diploid stem cells. They multiply by mitosis equational.

These are the cells involved in the process of meiosis.

They are formed during the second meiotic division. These are haploid cells that will divide more. Their chromosome number is the same as cytes II, either n chromosomes, but they contain half as much d’ADN, approximately half of the amount present in a somatic cell interphase.

Meiosis is adapted to germline. It concerns the first and second order cytes and combines two successive cell divisions preceded by a single duplication of the’ADN.

It allows the formation of haploid gametes and l’exchange of chromosomal segments between the paternal and maternal genomes. This process which accompanies sexual reproduction allows the genetic variability of the’species and allows it, over generations of s’adapt to variations in’environment.

Meiosis is a unique phenomenon of cell division, own to gametogenesis, in which she plays a key role in ensuring the reduction of chromosome number and the mixing of maternal and paternal genetic information The first division (reduction division) is preceded by the duplication of the’DNA during the end of l’interphase and successively understands : Prophase, metaphase, Anaphase and Telophase.

It will be observed the usual stages of mitosis, for n pairs of chromosomes : étaphase-Anaphase-Télophase. The result will be the formation of 4 haploid gametes.

Spermatogenesis takes place in the male gonads or testes. It begins at puberty, peaked at 20-30 years, gradually slows down to quarantine but may continue until’at an advanced age. Spermatogenesis is a slow and continuous process requiring 74 about days at home’man ; C’is the duration of the spermatogenetic cycle.

A- STRUCTURE OF SPERM :

The sperm cell is a mobile, highly differentiated, dont l’organization is comparable in most mammals.

The sperm is about 60 long pm. In light microscopy, on distingue :

→ Head, elongated and flattened (4 at 5 Along pm and 2 d pm’thickness). It contains’acrosome and nucleus .

→ The intermediate part (4 at 5 long pm), which contains the « mitochondrial spiral ».

– The main segment, forward, the cap 1/3 prior the core and is 70 nm d’thickness. It contains hyaluronidase. Its internal membrane is separated from the’nuclear envelope by l’sub-acrosomal space, from 20 nm.
– The equatorial segment, backward, covers the 1/3 means the core. Its thickness is 25 nm. C’is mainly in this segment’acrosine. The inner membrane is about 40 nm of l’nuclear envelope.

Starting from the core can be described :

– The intermediate piece : C’is the shortest and thickest part of the flagellum. It is limited, at its distal end, by a thickening of the membrane of the flagellum, l’annulus (corresponding to I Jensen ring light microscopy). Cross-sectional , on observe, from center :
→ L’axoneme or axial filamentous complex which has the typical structure of l’ciliary axoneme : 9 microtubule doublets devices surround a central doublet.
→ The 9 dense fibers – Mitochondrial spiral sleeve. It surrounds dense fibers and is made up of’a succession of mitochondria arranged in a single spiral file which is roughly 40 tours.
→ The plasma membrane.

– The main room : Its structure is the same throughout its length with, from center :
→ The axial filamentary complex which continues that of the intermediate piece.
→ The 9 dense fibers. They s’refine towards’distal end
→ The fibrous sheath. it s’acts as a fibrillary protein wound in a spiral. This sleeve has two diametrically opposite thickenings : longitudinal columns. Approaching the’end of main room, the longitudinal columns s’erase and l’thickness of the fibrous sheath decreases.
→ The plasma membrane of the flagellum.

– The end piece : It has a simplified structure with :
→ The axial complex filamentous center.
→ The plasma membrane.

Spermatogenesis begins around 13 -14 years, at puberty, and continues until’at a very advanced age. It takes place at the’interior of seminiferous tubes. Its duration is fixed and characteristic of’a species.

spermatogonia, diploid strains (2n chromosomes et 2n ADN), multiply by mitosis. These are the most peripheral germ cells. They are in the basal compartment of the tube, in contact with the basement membrane and Sertoli cells.

It concerns spermatocytes I and corresponds schematically to the’interphase and early prophase of the meiotic first division. The cell size increases by accumulation of material synthesized. when’they reach their maximum size, from 25 pm, they are designated by the name of’auxocytes.

It concerns spermatocytes. it s’basically acts’nuclear maturation, this phase corresponds to the meiosis. Prophase is long (about 16 days). At the end of the prophase, les spermatocytes I renferment 2n chromosomes et 4n ADN.

Spermiogenesis is specific for male gametogenesis. It corresponds to the transformation of each spermatid into a s permatozoïde. This phase lasts 23 days and ends with the release of sperm into the lumen of the seminiferous tubule, phenomenon called spermiation.

a- Formation of’acrosome from the Golgi :

The Golgi vesicles develop, become pro-acrosomal granules then merge to a single vesicle, the acrosome vesicle (or acrosome) who s’spreads and covers the 2/3 core. She takes the name of’acrosome and its content becomes homogeneous. L’acrosome is a large lysosome that will be located at the anterior pole of the future sperm. Its enzymatic content will be essential for crossing the envelopes of the’oocyte during fertilization (hyaluronidase, acrosine).

The 2 centrioles migrate to the opposite pole’acrosome. Les microtubules du centriole distal s’lengthen and s’organize into an axoneme which s’lengthens and emerges from the cell by pushing back the plasma membrane.

Nuclear changes begin in mid spermiogenesis. The core s’gradually lengthens and densifies. The 2/3 anterior of the nucleus are covered by l’acrosome. The posterior third is related to the cell cytoplasm.

The mitochondria are arranged end to end in a spiral around the Initial portion of the’axoneme, constituting the mitochondrial sleeve workpiece Intermediate. At its distal end, the sleeve is limited by a dense ring described under the name of’annulus.

e- Elimination of the cytoplasm :

The majority of the cytoplasm is phagocytosed by Sertoli cells. Some stands, constituting the residual body (de Regaud). The rest will be eliminated in the final stage of maturation during migration into the’epididymis.

With the pulsatile GnRH production (Gonadotropin Releasing Hormone) by neurons of the’that's the hypothalamus’installs testicular function. GnRH causes the pituitary secretion of two hormones, FSH I LH. At testicular level, these hormones have the following actions :

→ LH provides multi folds * The one cell / dg and testosterone secretion (endocrine function of the testis) :

It allows the growth in the female genital tract and affects the fertilizing sperm. It includes the percentage of motile sperm, the speed of displacement and the direction of travel.

It is scanned using a dye that enters the sperm

It is reduced if abnormalities in the plasma membrane, of the’enzyme equipment’acrosome, or condensation of the core.

It is assessed by the spermocytogram which falls morphological atypical sperm after staining. all ejaculate, in L’human race, contains atypical sperm. Too large proportion is abnormal.

L’oogenesis comprises propagating phases, d’growth and maturation. The phase’growth and early maturation s’to perform’inside the ovarian follicle and are linked to’evolution of the follicle. The end of maturation is delayed. it s’completed after fertilization. it n’there is no differentiation phase.

It concerns the oogonia, diploid stem cells and it is characterized by a succession of mitoses which will lead to the formation of’ovocytes I (first class), also diploid. This phase takes place, in women, during embryonic and fetal life. The ovogonies are observed in the cortical area of ​​the’embryonic ovary, have a spherical shape and are small (15pm), degenerate, for the majority, to the 7th month of intrauterine life (atresia), I give oocytes (2n chromosomes, 2q ADN), larger cells (20 at 40 pm), who immediately after their training s’surround follicular cells and d’a peripheral membrane that separates them from the rest of the ovarian stroma, l’set designating the primordial follicle, Then they begin the first meiotic division, which hangs at the stage of prophase. L’the oocyte then enters a quiescent state in which it can remain for many years (oocyte I blocked in prophase of the first division of meiosis until’at puberty).

So, at the end of this phase of multiplication (birth), one-time stock egg I (about a million) consists, each contained in a primordial follicle.

It is characterized by a very significant increase in the size of the’ovocyte I, passing of 20 at 120 pm diameter. Very long, she is not’complete that’at the time of maturation of the follicle and consists of syntheses of’RNA and proteins that will play a crucial role during fertilization and during the early stages of embryonic development.

The primordial follicles regress in large numbers between birth and puberty :

→ in l’absence of fertilization, l’oocyte remains at this stage of meiosis and degenerates after 24 hours.

→ s’there fertilization, l’oocyte II will complete its maturation and will transform into a mature ovum(ovotide) with the emission of 2th polar body.

B- EVOLUTION OF OVARIAN FOLLICLES (FOLLICULOGENÈSE) :

4- tertiary follicle (or cavitary or antral) :

The liberation of the female gamete is l’ovulation. It occurs in the middle of the female cycle, at 14th day of the menstrual cycle. L’whole cumulus s’is then detached from the rest of the granulosa (under’action d’proteolytic enzymes) and floats in the follicular cavity, the follicle wall stays in the’ovary and forms the dehiscent follicle.

L’oocyte completes its cytoplasmic and nuclear maturation which results in the formation of’oocyte II which will lock in the metaphase of meiosis II.

At the time of’ovulation, the flag of the trunk, mobile, covers the’ovary. It recovers’oocyte II. Proper flag tubal mobility is essential to the reproductive function. Quickly, l’ovum migrates up’to’bulb tubal where fertilization is done. Migration is passive. It is facilitated by the liquid current going from the pavilion to the’uterus and the vibrating eyelash movements of the’tubal epithelium.

L’oocyte is a spherical cell of 150 pm diameter, relatively inert, surrounded by envelopes

After’involution of the corpus luteum, persists in the’ovary a small mass of fibrous tissue, white body or corpus albicans.